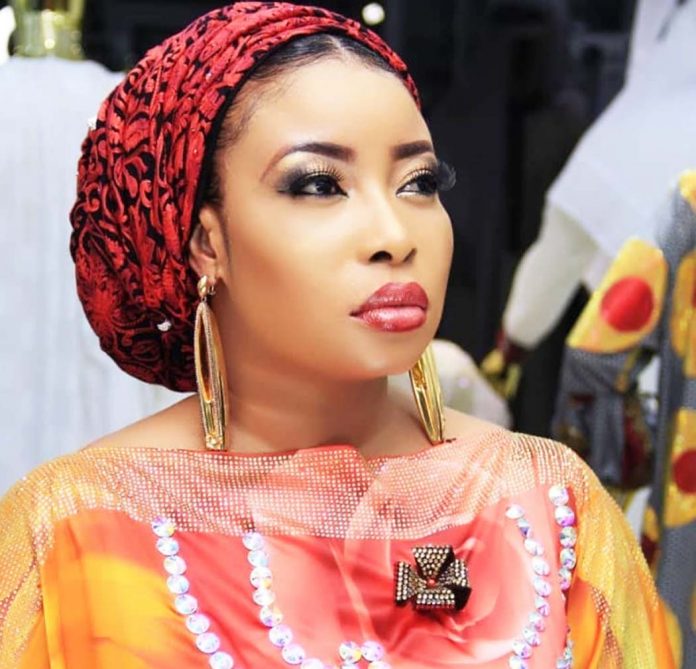 Eizabeth Ibukunoluwa Anjorin is a Yoruba movie actress. She is popularly called Lizzy Anjorin. Lizzy is known for Ise Onise (2009), Arewa Ejo (2009), and Owowunmi (2010). Since  hitting limelight some eight years ago, Lizzy has made several movie appearances.

The model turned actor has also produced some of her own movies. Her debut movie, Tolani Gbarada, was followed by Gold, a compendium of her life experiences; Iyawo Abuke, Kofo Tinubu, Kofo De First Lady, and her latest sensational movie, Owo Naira Bet.

The City People Entertainments Awards Best Actress 2014, Lizzy, recently but interestingly released the movie ‘Owo Naira Bet’, more than a year after it was premiered in Lagos in a festival-like atmosphere which had the Ooni of Ife and the Alaafin of Oyo grace the occasion, including several dignitaries from all walks of life in attendance.

For whatever reason though, the movie premiere date then had clashed with the 50th birthday of one of the lead cast in the movie, Saidi Balogun.

Shortly after the movie was shot, the actress had branded a Hiace bus with the poster of the movie. She drove around in the bus, besides the massive publicity that trailed it on social media, television, and radio and in newspapers.

Then, she picked her first date for the premiere of the flick. When the first date couldn’t hold, she picked another date and the adverts continued, announcing the new date.

Among other stars that featured in the movie are Olaiya Ige, Niyi Johnson and Jumoke George. Written by the actress and entrepreneur, Owo Naira Bet talks about how people spend lavishly without making any investment for their future or for their children.

However as expected, it triggered insinuations that popular football betting outfit Nairabet, sponsored the movie. But the Badagry, Lagos State born actress had in a chat insisted that her new production was not in any way connected with Nairabet. That she only got to know that there was a company like that when someone mentioned it to her while shooting and she did not collect money from them to produce the movie.

The stylish Nollywood star found another love in her new enterprise which is fashion. She believes that as a vibrant fellow like herself, one should not depend  on  one line of business and definitely not like acting as many stars are discovered each day.  She was a student activist on the campus of the Olabisi Onabanjo University. She subsequently went to an acting college for four years where she met the late Idowu Ogungbe and Ahmed Alasari who were instrumental to her career growth.

Liz once shared very shocking details of her life over the years while thanking a lot of people for being there for her. The actress started her real-life journey series on Instagram, narrating how she grew up on the streets with her mother to struggling all through her youth and the final part which she wrote about where she thanked everyone who  played a major role in her becoming a celebrity.

It is not unusual to see or hear practitioners in the creative sector attach unfounded claims to their work. Such claims in some cases appear to be publicity stunt. Lizzy once claimed she’s the best movie producer. “Tell me in history which movie beats my movies in terms of picture quality, location, settings directing, acting, attires, costumes and props etc….excluding hypocrites, I have paid my dues without getting many accolades but that will never stop me from producing best  movies to promote this culture.”

Though perceived to be controversial and linked to a fictitious  sugar  daddy, the actress was reported to be undisturbed to be seen as such.  Liz had also disclosed that the fear of being stranded should that happen, pushed her into creating other sources of income to survive. “I work very hard to earn my money. I go through a lot of stress every day but people just think that I just sleep and all these things come to me on a silver platter.

“The talk of having a sugar daddy is annoying because there is nothing like that.

The truth is that God is the only sugar daddy I have. Some people will just sit down and say I get support from some politicians but in Nigeria of today; nobody will constantly give you money except you work with your two hands. But some individuals will just sit somewhere and concoct all sorts of lies about me.”