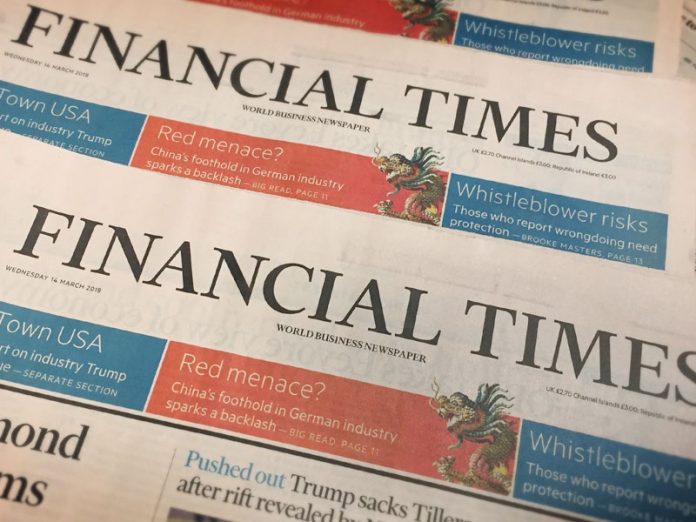 A report by the Financial Times Thursday stated that most of Nigeria’s commercial banks have their fortunes tied to fluctuations in global oil prices considering that about a third of all credits they extend to the economy are directed to operations in the country’s oil and gas industry.

The report, titled ‘Investing in Nigeria,’ chronicled developments in Nigeria’s economy and politics ahead of the 2019 general elections.

It explained, among other observations, that analysts estimate that about half of the loans of commercial banks in Nigeria were given for upstream, midstream, and downstream oil and gas operations and the supply chain, adding that rising levels of Non-Performing Loans (NPLs) of the banks were traced to the oil sector.

The report indicated that the 650,000 barrels of oil per day refinery plant currently being built by Dangote Group in Lagos, and set for inauguration in 2020, would likely produce more fuel than what Nigeria needs and send the dilapidated refineries of the Nigerian National Petroleum Corporation (NNPC) packing.

Describing the nexus between Nigerian banks and the vicissitude of oil prices, the report said while the rally in the price of oil over the past year, “is far from a universal benefit to Nigeria’s economy, which is dependent on crude oil revenue but cannot meet domestic fuel demands from its own supply,” it has been good for the banks.

“The rise has come as a welcome respite for the country’s banks, whose fortunes are tied to fluctuations in the oil market.

“About a third of all domestic commercial bank credit is extended to the oil and gas industry. If its entire upstream, midstream, and downstream operations and supply chain were added together, analysts estimate oil and gas lending would make up as much as half of bank’s loan books,” it stated.

According to the report, “The system-wide non-performing loan ratio – a key metric for bank’s health – fell to 12.5 per cent in June from 15 per cent a year earlier, according to official figures. But by August, it had risen to 14.7 per cent.”

The report added that the Central Bank of Nigeria (CBN) Monetary Policy Committee (MPC) had in a recent communiqué said it was, “concerned with the rising level of NPLs in the banking system, traced mainly to the oil sector.”

The report added that while top tier banks such as First Bank are generally improving, recovering from a slump that saw its NPLs peak at 24.4 per cent at the end of 2016 after being down to 20.8 per cent at the end of June, other smaller banks are still struggling with some even relying on the CBN to stay afloat.

Quoting Olamipo Ogunsanya, a banking analyst at the Lagos-based Renaissance Capital, the report said, “The rise in oil price has direct implications for Nigeria’s banks given their exposure to the sector.”

Ogunsanya added that the NPLs of the banks were primarily driven by lower oil prices and a slowdown in the country’s economy.

“But smaller banks are struggling. Last month the Nigerian government announced it would prosecute those responsible for the collapse of Skye Bank, a local lender, and several banks are still being kept afloat almost entirely by support from the central bank.

“Meanwhile, Diamond Bank recently announced the resignation of four of its board of directors, amid a streamlining programme that has offloaded assets, in part because of the poor performance of its oil-heavy loan book,” added the report.

The report explained that in 2017, the banking sector was shaken when telecoms operator, Etisalat’s Nigeria business, under pressure from the recession and the impact of capital controls, defaulted on a $1.2 billion syndicated loan from 13 local banks.

It, however, noted, “The rise in the oil price should help alleviate some of the pressure, although it fell back in early November. Most of the loans on banks’ books were restructured when oil was $35 to $40 a barrel. Low foreign exchange liquidity, which was a big driver of bad loans, has improved significantly as dollars return to the country via oil sales.”

According to it, analysts such as Renaissance Capital said in a recent research that Nigerian banks are severely undervalued.

“In fact, they are trading at valuations close to those of Turkish banks, which have suffered from rapidly increasing cost of funding and concerns about asset quality following collapse of the Turkish Lira, in stark contrast to the improving trends of the Nigerian banking sector,” the report quoted Renaissance Capital to have said.

It said despite weathering the country’s first recession in a quarter of a century, many of the country’s banks still made record profits, adding that Oxford Analytica, a consulting firm, discovered that return on equity for the sector doubled to 20.5 per cent between the end of 2016 and October 2017.

According to it, the banks fed on the government’s desperation for money amid falling oil receipts and CBN’s multiple exchange rate regime which it noted created a unique arbitrage opportunity that they exploited.

On Dangote’s oil refinery, it explained that its emergence could change the country’s energy balance and effectively send the three refineries run by the Nigerian National Petroleum Corporation (NNPC) in Warri, Port Harcourt, and Kaduna, to their natural deaths because there would not be any need for them on the back of the 650,000 barrels a day capacity production would be more than what Nigeria needs.

It explained that the refinery would equally have a fiscal impact on Nigeria’s economy considering that there could be a reduction in the demand for foreign exchange to import petrol which is subsidised.

According to it, experts noted that Dangote may not sell petrol at the subsidised price of N145 per litre when the refinery comes on stream, and that Nigeria would have to scrap the subsidy, which is quoted to cost her $7 billion annually to maintain and demands about 40 per cent of her foreign exchange, because it would be cheaper for her to source fuel from the Dangote refinery.

The report equally said the upcoming presidential election would be a verdict by the Nigerian people on the works President Muhammadu Buhari, said he has done since he was elected in 2015. It explained that analysts however rate Buhari’s government as mediocre.

“After taking six months to pick a cabinet, Buhari’s tenure has been punctuated by long absences for treatment of a mysterious illness in London. Now 75, he faces a battle for re-election in February after a first term that analysts rate as mediocre.

“Efforts to improve security, rebalance the economy and lure foreign investment have seen mixed results. But where the state has stepped back, private enterprise has often stepped forward,” it said.