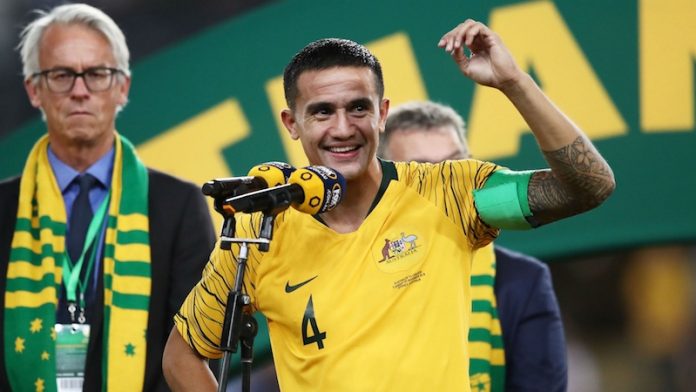 Australia bid farewell to an emotional Tim Cahill yesterday as he made his 108th and final appearance in 3-0 win against Lebanon at ANZ Stadium in Sydney.

Cahill, 38, came on in the 82nd minute, after two goals from Martin Boyle and a Mathew Leckie strike had all but sealed the win for the hosts.

Despite failing to score on the night he finishes his international career as Australia’s record goalscorer with 50.

“This is the only time you’re going to see me cry,” he said after the game.

“Every time I wore the green and gold, I played with my heart and I never left anything on the pitch. Thank you very much Australia.”

It was agreed with manager Graham Arnold that he would appear in the final stages of the friendly: “The first 85 minutes is all about our performance,” Arnold told Fox Sports. “The last five minutes can be for Timmy.”

Cahill’s tally of 108 appearances is one behind former goalkeeper Mark Schwarzer’s Australia record of 109.

The former Everton and Millwall attacking midfielder was the first Australian to score at a World Cup, in their 3-1 opening group game win against Japan in 2006.

However, it was his volley against the Netherlands in the 2014 World Cup that many believe was his best ever goal.

For Australia it was their last friendly match at home before they begin their Asian Cup title defence in January 2019.