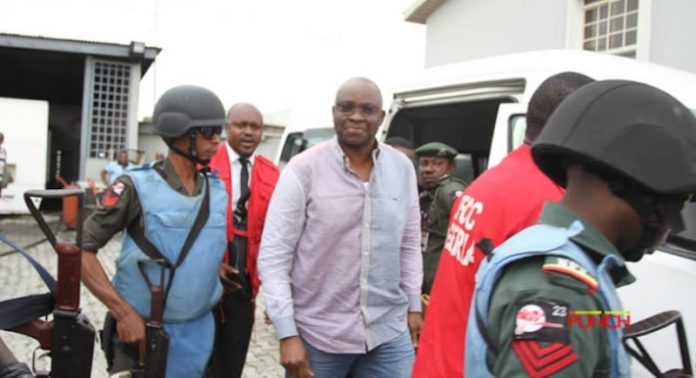 For allegedly taking over a land belonging to Ahmadiyah Muslims Community, in Ado Ekiti, former Governor Ayodele Fayose, is currently under attack by the community.

On Saturday, they staged a peaceful protest, where they urged the current administration in the state to revoke the land to avert crisis in the state.

The Muslims, who displayed placards of various inscriptions, said the land located at Atikankan area, Odo Otu, in the state capital, was acquired in 1940 under the leadership of the late Ewi of Ado Ekiti, Oba Aladesanmi Anirare.

The President of the Ahmmadiyya  Muslim Jama’at, Ekiti chapter, Mr. Alawode Bashirudeen, who described the forceful takeover of the land as an act of oppression to Muslims in the State, disclosed that the organisation built the first mosque on the plot of land in the 40’s. According to him, the old mosque which was built with mud was however bulldozed to give way to a befitting structure.

Some of the placards read: ‘No Illegal Acquisition of our land,

‘Government, Give Us Our Land’, ‘We Want Our Land Back’ and ‘Enough of Marginalisation of Muslims in Ekiti’.

Alawode said the Islamic group was surprised this year, towards the end of the administration of Mr. Fayose to see a new petrol station being built on the land that was apportioned to them 78 years ago.

He said the group immediately sent a letter to the former governor,  and were told that the land was allegedly acquired by the ex-governor for his son to construct a filling station.

“We went to the State Ministry of Lands and the General Manager of the Ekiti State Housing Corporation and complained, but they told us the land has been acquired by the government and we suspected that government can’t acquire land to build petrol.

“When we suspected foul play and saw the structure springing up, we sent a petition to the Police Commissioner and he intervened by stopping the construction. It was at the meeting with the CP that we got to know that the land was acquired by the governor for his son.

“Rather than even tender apology, the ex-governor threatened us and said the land had been acquired and that there was nothing we could do about it.

“We have documents backing us that we are the original owner, so we are appealing to the government to demolish the structure and give us our land back, it belongs to us.

“We can only negotiate with the owner of this structure if they give us another land within this vicinity and this should come with all  necessary documents”.

But when contacted, Fayose’s Media Aide, Lere  Olayinka, said: “No child of the former governor is building petrol station anywhere in Ekiti State and none of them benefitted from his government in terms of lands acquisition.

“All actions of his government were done within the ambit of the law and the records are there.

“Also, the issue in question was addressed with the Muslims while he was in office and the present government is at liberty to look into it.”