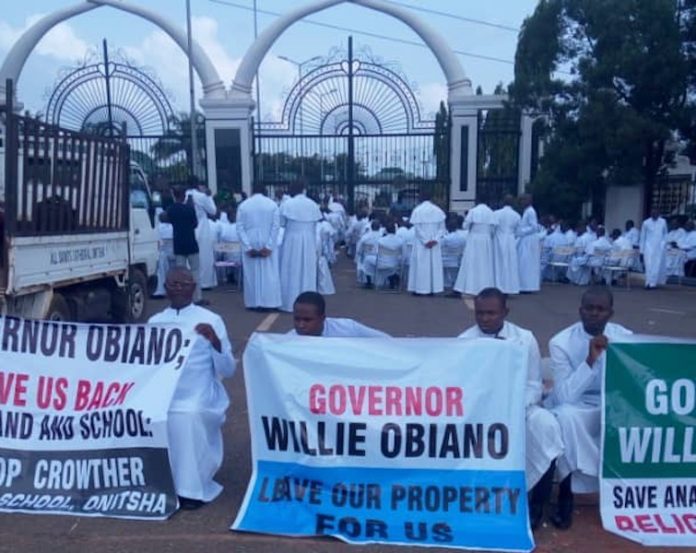 Two weeks back, persons suspected to be thugs loyal to the Anambra State Government invaded Bishop Crowther Primary School, in Onitsha, which also serves as a worship centre for Anglicans in the area, and chased away worshippers.

The reason for their action was because the land had been in contention with their Catholic counterparts also laying claim to the land, thereby forcing the state government to seal off the land. But insisting on being the genuine owners of the land, the Anglicans had moved in to conduct their worship without regards for the seal, before the thugs arrived.

The Siege at Government House

Deciding to take the war to the chief security officer of the state, Governof Willie Obiano, over 300 priests of the Diocese of the Niger, last week, all fully dressed in their priestly robes stormed the Anambra State Government House. They seemed prepared for what fate may thrust at them as each carried a collapsible chair in one hand and a hymn book in the other.

The priests carried placards of various inscriptions to give an inkling of their grievances. Some of the placards read: ‘Gov. Obiano stop disrupting our church services and activities’, ‘Bishop Crowder Memorial Primary School is not government property’, among others.

As they assembled in front of the gate of the government house, which only the state governor has the right to use (every other visitor uses a side gate), they arranged their seats in a row that depicted a place of worship and immediately resorted to singing their hymn.
From their look and demeanour, they were not in a hurry to leave, even though the sun was at its scorching best. It was only by a stroke of luck that the governor had just moments ago driven past the gate to his office to resume work, because if he was there late, or had any reason to leave office urgently, he would have been confronted by the priests, who obviously were prepared for a showdown.

Grievances
The leader of the protesting priests, and Archdeacon of Onitsha South Archdeaconry, Venerable Josiah Chukwukadibia Ofoegbu, said they were in front of the government house to register their grievances over marginalisation and politics of denomination being played by the Anambra State Government under Obiano.

They also claimed that so many Anglicans in the state were denied All Progressives Grand Alliance (APGA) ticket under the very supervision of Obiano for various elective positions in the just concluded party primaries, describing such as a threat to peaceful coexistence.

“We are embittered in what is happening in our dear state. This present administration is turning Anambra to a denominational state. It is unfortunate that this is happening 28 years after Bishop Ajayi Crowder who built the school in question for which we are protesting, left Nigeria. The school was handed over to the Anglican Church. Both Anglicans and Catholics know about that. When government seized school, it was seized from us and during hand over to schools, it was again handed over to us.

“But it was quite unfortunate that Obiano sent thugs few weeks ago to send us out of the place. They disgraced us on our own property. They dispersed the worshippers and even threatened to kill us. This injustice must end. We want to let him know that we will worship there on Sunday, he should prepare for war. We are ready to die on that land. Obiano should stop that discrimination.

“Some Anglicans were denied APGA ticket in this state because they are not Catholics. When people like Jim Nwobodo and Nnamdi Azikiwe were leaders, they never discriminated against anybody. We are here to also tell the governor that we will worship at the place on Sunday and if he fails to open the place, we will open it by force. Nigeria and the world will hear what will happen on Sunday,” he said.

Protracted Battle Between Anglicans and Catholics

THISDAY gathered that the genesis of the problem was not the seizure of the property by government, but a protracted battle between the Catholic Church and their Anglican counterpart, who have for long been enmeshed in a supremacy battle. The state government however decided to take over the land, a development that irked the Anglican faithfuls, who refused to believe that the government actually took over the land.

A source from the Anglican Communion who begged to remain anonymous said: “Government did not take over the school, what we think they simply did was to take the land which if we did not raise alarm, they would have simply handed over to the Catholic Church. Obiano is aiding the seizure of our property by the Catholic Church, because he is a Catholic. That is our major unhappiness.”

Okwosa, who is also the Managing Director and Chief Executive Officer of Awka Capital Territory Development Authority, while addressing journalists said the governor has set up a committee to look into the matter with a view to finding a lasting solution, even as he regretted that governor was not informed about their visit.

He said: “To the best of my knowledge, there wasn’t an official information regarding the visit by the priests. They are laying down their grievances, and from what they are saying, they have a misgiving regarding a school at Onitsha which they want the governor to intervene and do the needful.”

Obiano however stuck to his gun, over the request of the priests to be briefed by him. Even though he was in the office, the governor snubbed the over 300 priests. Instead, the governor was said to have sent for the Bishop of the diocese, Rt Rev Owen Nwokolo, who before leaving to meet the governor in his office ordered an end to the protest, causing the priests to vacate the gate of the government house at mid noon.

Before leaving, one of the priests who spoke to journalists stated that; “we will leave for today, but the governor must know that the next time we come here, our protest will not be a holy one. We will not even come in our priestly robe, so the governor must note this.”

The Governor’s Stance
Obiano has however responded to the protests of the priests, insisting that the bishop of the diocese and his wife were merely orchestrating trouble, even though they are aware that the land in question does not belong to their church.

Obiano who responded through his Chief Press Secretary, Mr. James Eze, said if the bishop had approached government, seeking for allocation of land for building of extra parishes, like other bishops have done, “we would have obliged him. But government would not fold its hands and watch its property being taken away by any individual or group”.