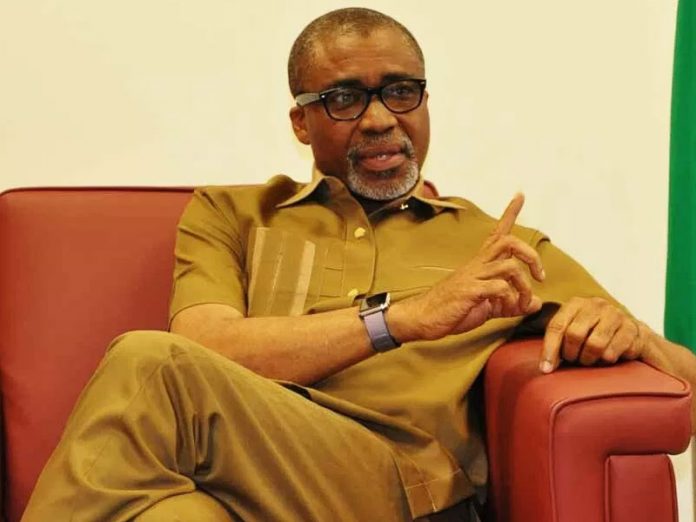 Embattled Senator Eyinanya Abaribe has written the Nigerian High Commissioner to Israel to investigate report to the effect that the leader of the proscribed Indigenous People of Biafra (IPOB) is currently taking refuge in Isreal.

Also friday, Justice John Tsoho of the Abuja division of the Federal High Court gave the go-ahead for the commencement of the suit seeking an order of mandamus to compel the police and the Department of State Security Service to prosecute, Abaribe, a former Minister of Aviation, Femi Fani-Kayode and others for allegedly facilitating the escape of Kanu.

Abaribe, Tochukwu Uchendu and Emmanuel Shalom Ben, a Jewish priest had stood surety for Nnamd iKanu as part of conditions for his bail granted by Justice BintaNyako of the Federal High Court, Abuja in April 28, 2017.
However, the whereabouts of Kanu and his parents has remained a mystery since September 14, 2017 when soldiers of the Nigerian army invaded their native home in Umuahia, Abia State.

Following, the disappearance of Kanu, the trial court has asked the sureties to produce the defendant or forfeit their bail bond of N100,000,000 each.

Abaribe in the letter dated November 7, 2018, through his lawyer Chukwuma-Machukwu Ume SAN is however urging the High Commissioner, Ambassador Enoch Duchi, to “Use his good office to painstakingly enquire from the government of Israel” if there is any NnamdiKanu, a Nigerian citizen in their country.

The lawyer noted that the investigation and the report which would be made on oath by the High commissioner would be submitted before the court.

Ume in the letter written to the Nigerian High Commissioner to Isreal through the Minister of Foreign Affairs, said the letter is necessitated by social and online media reports to the effect that Nnamdi Kanu was recently sighted at the wailing wall during a prayer session in Israel.

He said if his findings revealed that there is an NnamdiKanu in Israel, he should check whether he is the same person standing trial in Nigeria.

Part of the letter read, “He is to find out from the government, how he arrived there and the circumstances that led to that, what of his parents.”

Ume, in addition said if indeed there is an NnamdiKanu in Isreal, ” We are ready to assist you in a necessary DNA procedure to enable you verify whether the alleged NnamdiKanu said to be in Isreal is same as the NnamdiKanu standing trial in Nigeria “.

Meanwhile, Justice John Tsoho of the Abuja division of the Federal High Court yesterday gave the go-ahead for the commencement of the suit seeking an order of mandamus to compel the police and the Department of State Security Service to prosecute Abaribe, Fani-Kayode and others for allegedly facilitating the escape of Kanu.

Justice Tsoho gave the approval in a ruling on an ex parte application filed by one IsiahAyugu.

Ayugu in the suit marked FHC/ABJ/CS/1254/18, asked the court to immediately order the respondents in the matter to commence investigation into the circumstances surrounding the escape of Kanu from Nigeria, after the Nigerian Army were accused of abducting, arresting, killing and assassinating him.

Apart from Abaribe and Fani-Kayode, others the plaintiff is seeking their arrest and prosecution are Ifeanyi Ejiofor, Tochukwu Uchendu, Emmanuel Shallow Ben, Emmanuel Kanu, UchechiKanu.

Ayugu, in the suit filed and dated October 31 through his counsel, Oghenovo Otemu, prayed the court for an order mandating all the respondents in the case “to investigate and prosecute all those who worked together to propagate and spread lies and falsehood that Kanu was abducted, kidnapped, arrested and detained by the Nigerian Military, when indeed they were well aware of Kanu’s whereabouts because they played roles in helping him to disappear from Nigeria.”

Delivering ruling on the motion, Justice Tsoho however ordered the suit to be served on the defendants – the DSS, its Director-General, the police and the Inspector-General of Police.
Tsoho subsequently adjourned till November 22 for the hearing of the suit.