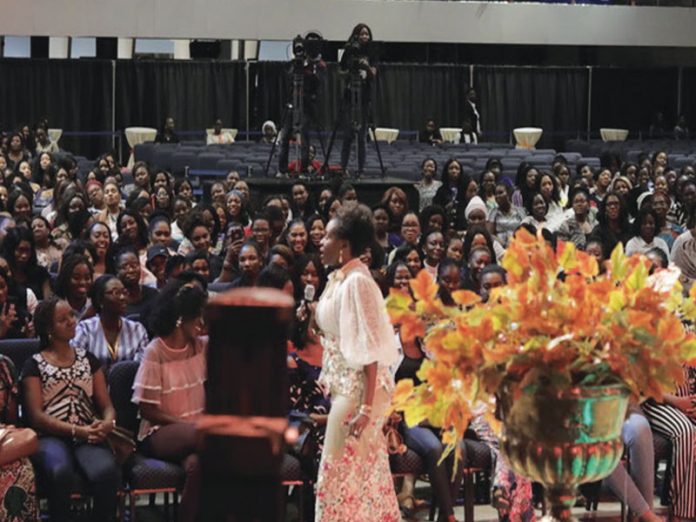 Gone are the days when they say a woman’s world is limited to the kitchen as today’s women are doing more than just being reflections of their husbands; they are carving a path for themselves.

As the world progresses and women achieve more freedom, they are discovering that they are more than society had previously defined them.

To break boundaries, women must realise their potentials and maximise them and with education, determination and self-discovery, women are more empowered and can create immense impact in the society.

Intellectual, spiritual, and physical development are as important for women as they are for men today.

The church already provides an opportunity for the spiritual development and self-discovery of women. Some even go beyond this to provide opportunities for women to enhance their capacity and actualise their dreams.

One of such is The Elevation Church, a Lagos-based non-denominational Christian organisation that recently hosted a conference for women called ‘Made for More’.

The Made for More Women’s Conference is a two-day annual event, which is aimed at empowering women. The event holds every October at Pistis Conference Centre of The Elevation Church and is targeted at every woman, irrespective of status and age, within and outside the church.

Speaking on the rationale behind the event, co-lead pastor of the Elevation Church and convener, Bolarinwa Akinlabi, said the Made for More conference is an avenue to speak directly to the sense of worth in a woman and to let her know that she is made for much more than the media and society seem to suggest.

“The average young woman, before reaching the age of 20, has received so many stereotypical definitions from the family unit, extended family, billboards, magazines, etc.

“If you open the pages of a typical magazine, without even seeing a word, there are expectations being pushed out on the average young woman such that she thinks her worth and value is about the outward appearance.

“We have to speak directly to that sense of worth in a woman to let her know that she is made for much more than the pages of the newspaper seem to suggest.

“If you look at the billboards on the street, they suggest that women are made for a certain thing. But God has given us the instruction to speak specific words of worth into the woman. Her worth is made up of so much more than the physical attributes that define her.”

The conference started in 2016 with Pastor Nike Adeyemi of Daystar Christian Centre as the first guest speaker.
Since then, there have been testimonials by women who have been inspired by the event to develop an idea and start something.

According to Akinlabi, one woman recently told her that she had always had an idea to start a new business and she was inspired by the first Made for More conference. She launched out her business and has been growing in leaps and bounds over the years.

The second Made for More Women’s conference was in 2017 and it featured Pastor Mrs Funke Felix-Adejumo, a renowned speaker and philanthropist who is the co-founder of Agape Christian Ministries.

At the conference, a thousand women were in attendance to worship, discuss crucial issues, pray and get empowered. Over a hundred women-led and owned businesses and brands were on exhibition for Women in Business sections. Women also displayed their products, brands and cultivated business relationships.

The third Made for More Conference was held at The Elevation Church’s Pistis Conference Centre on October 19 to 20, 2018, with the theme, “Girl on Fire”.

For two days, Akinlabi and over a thousand other women shared experiences, networked, and encouraged one another to be better in various aspects of their lives.

The programme featured Jumoke Adenowo, a renowned Architect, interior designer and founder of AD Consulting as the guest speaker.

Adenowo challenged the passion and drive of women, inspiring them to discover themselves and break beyond the limits that confine them. According to her, a man sees a woman as mere seed, but God sees a forest.
She said: “To maximise their inner potentials, women have to submit to God. Obedience is doing what you have been told to do, submission is deliberately putting down what you have.”

There was a “Real Talk” panel session, which focussed on how women can have it all.

On the second day, there was a ‘Women in Worship’ session that featured popular gospel artists including Sola Allyson, Lily Perez, Ccioma and Ella Vibes. These music ministers led the women in unrestrained and pure worship.

Speaking about the worship session, Akinlabi said; “As women, there are some issues we cannot look to people to solve for us, God has to be the answer. We had a wonderful worship session where we just created an atmosphere for the woman to receive the healing and reinforcement and strength that she can only get from her maker.”
One of the vital components of the event is the business exhibition/fair, a place where women entrepreneurs come together and network.

The “Women in Business” exhibition held on day two of the conference, October 20, 2018. The aim of the exhibition was to create awareness for women-led ventures to share business ideas, experiences and merchandise and network.
The side attractions included childcare, and a parental clinic. At the parental clinic, which held on the last day of event, mothers sat with physiotherapists, educators, counsellors, certified autism specialists and childhood neurodevelopmental assessors.

The parenting clinic was created for women dealing with some challenging issues in their families.
There were also experts in the child psychology business; seasoned teachers and educators who also brought women who are parents together to give them real tools to help them deal with troublesome relationships with their children.

Head of Communications, Chinny Ugoji, said the organisers of the programme want to raise women that are full of passion for the right things; women that are not afraid to move forward with a sense of purpose, focus and ambition.

Just wrapping up its third edition, the Made of More Women’s Conference has made a positive impact in the lives of many women who could not hold back their testimonies.

Coincidentally, The Elevation Church has just concluded the celebration of its eight-year anniversary.
The church is fast becoming a worship centre of choice for many young people in the Lekki area, who are drawn by its charismatic pastor and his dynamic messages.