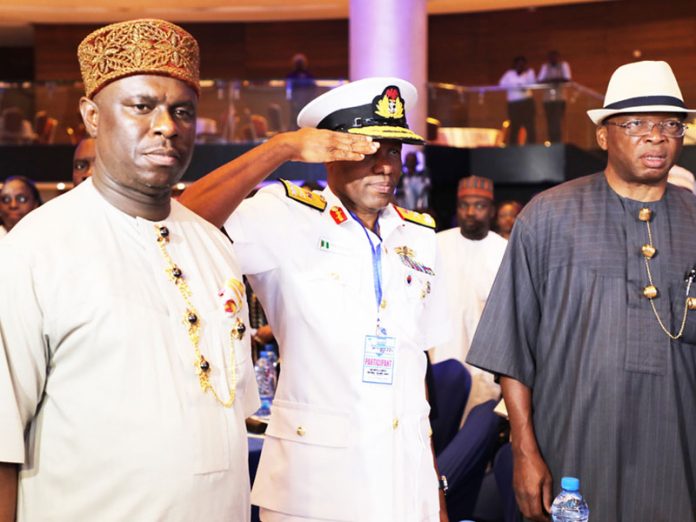 This year’s World Maritime Day offered yet another opportunity for stakeholders to plot the way forward for the Nigerian maritime industry. Kunle Aderinokun reports

How can Nigeria optimise its enormous maritime potential? That was the question at the forefront of every mind as stakeholders from around the country and beyond converged on Lagos on October 16 to participate in the 2018 World Maritime Day celebration hosted by the Federal Ministry of Transportation.

With the theme, “IMO 70: Our Heritage – Better Shipping for a Better Future,” this year’s event, which was held at Eko Hotels and Suites, Ikoyi, coincided with the 70th anniversary of the International Maritime Organisation (IMO). The landmark event presented an opportunity to celebrate the achievements of the maritime industry and focus on confronting the challenges of the industry. That much was clear in the message of the IMO Secretary-General, Mr. Kitack Lim, which set the tone for discussions at the event that had several key maritime stakeholders in attendance.

“This provides the opportunity to take stock and look back, but also to look forward, addressing current and future challenges for maritime transport to maintain a continued and strengthened contribution towards sustainable growth for all,” Lim stated.

First, there was a keynote address by the Minister of Transportation, Rt. Hon. Chibuike Rotimi Amaechi, an address by the chairman of the occasion, Secretary to the Government of the Federation (SGF), Barr. Boss Mustahpa, speeches by the heads of the parastatals under the Federal Ministry of Transportation, then paper presentations by key stakeholders, and, finally, a robust discourse on the issues raised in the papers. Everyone agreed that effective administration of Nigeria’s marine environment as well as security on the coastal waters and the seas were fundamental in the effort to maximise the country’s maritime resources.

The Nigerian Maritime Administration and Safety Agency (NIMASA) is the linchpin of the country’s waterways security and management strategy.

NIMASA is responsible for the administration of maritime safety and security, seafarers’ standards, maritime labour, and shipping regulations. It is also responsible for the promotion of commercial shipping as well as coastal and inland shipping activities, and administration of pollution prevention and control standards in the marine environment. The achievement of those maritime objectives is the fulcrum of the NIMASA Director-General, Dr. Dakuku Peterside’s mission and vision. He has introduced lots of restructuring, innovation, and transformation geared towards realisation of the set goals since he became Director-General on March 10, 2016.

An passionate team leader and transformer, Dakuku has approached his job with pep and vigour. And he has had significant success in leading NIMASA to higher grounds and restoring confidence to the maritime sector.

The NIMASA success story under Dakuku was one of the issues that came out clearly during the 2018 World Maritime Day celebrations.

“Who leads the regional effort? I am very glad to testify that, indeed, Nigeria has woken up. Prior to now, Nigeria seemed to have disappeared in regional initiatives and efforts, but NIMASA is fully on ground now in all the organisations, and I am very, very proud of the leadership of NIMASA. That testifies to the hard work, the intellect, and self-confidence of a leader who is not afraid to surround himself with other experts,” Usoro, a former director-general of NIMASA, added.

Dakuku stated in his message at the occasion, “Under our watch in NIMASA, the administration has taken up some change in policy programmes to not only ensure that the maritime industry contributes significantly to the national coffers, but also to serve as catalyst for the country’s industrialisation.”

The change initiative is captured in a plan anchored on five strategic pillars, namely, Survey, Inspection and Certification Transformation programme; Environment, Security and Search and Rescue Transformation programme; Capacity Building and Promotional Initiatives, which entail growing indigenous tonnage, ship building and human capacity; Digital Transformation Strategy; and Structural and Cultural reforms, which include attitudinal and behavioural changes in staff approach to work as well as processes and procedures.

The plan has yielded fruit in many important areas, Dakuku emphasised before the audience of maritime stakeholders. He said following the Executive Order on Ease of Doing Business issued by the Presidency, NIMASA had achieved a reduction in turnaround time for processing cargo manifests and issuing Debit Notes to Shipping Agents from three days to 24 hours. This was achieved by extending work hours for some staff of the agency’s Shipping Development Department and opening its offices for business on weekends to cater to the needs of shipping agents.

Other achievements of the agency in the last two years include the sponsor of an antipiracy bill, which is nearing passage at the National Assembly. Dukuku said before the end of this year, Nigeria will have an antipiracy law, and become the first country in the West African sub region to do so.

“We are determined to continue to support shipping activities under our shipping promotion mandate,” he said, disclosing, “The agency, in collaboration with the Federal Ministry of Transportation, is working towards the reestablishment of the national shipping line.”

NIMASA has contributed more to the Consolidated Revenue Fund in the last two years as its reform initiatives continue to materialise.

To facilitate its shipping development agenda, NIMASA is taking the twin issues of safety and security seriously.

According to Dakuku, “What drives the economic benefits of shipping is when the domain is safe and secure. We have taken a number of initiatives and the pillar of all the initiatives is NIMASA Total Maritime Security Strategy.”

The strategy is being executed in collaboration with the Nigerian Navy, which is responsible for the naval defence of the country, and other security services.

“We are committed to making Nigeria one of the safest maritime domains in the continent of Africa,” Dakuku stated.

Expectedly, the Chief of Naval Staff, Vice Admiral Ibok-Ete Ekwe Ibas, who was represented by the Chief of Training and Operations, Nigerian Navy, Rear Admiral MM Kadiri, focused on the issue of security on the waters and seas in his goodwill message at the occasion. So did the Inspector-General of Police Ibrahim Idris, who was one of three persons that presented papers at the event.

“The safety of shipping and transfer of goods at sea remains one of Nigeria’s critical maritime interests,” Ibas stated. “The Nigerian Navy has incorporated a number of measures to enhance the safety of shipping as our own way of contributing to national development,” he added, stressing, “I am happy to observe that these measures have been largely successful.”

The naval chief said there had been, “A significant improvement in the security situation within our maritime space in collaboration with other stakeholders. I wish to reassure you that the situation will continue to improve.”

He, however, called for more private sector investment in the marine industry.

“As we mark this year’s World Maritime Day, prospective investors and the organised private sector are encouraged to take advantage of the good situation in the marine environment by increasing investment in the shipping sector and the maritime industry in general,” Ibas said. He said such investment will help to reduce poverty and improve national security.

But the Chief of Naval Staff remained optimistic. “While there are still areas of concern in activities on the African maritime space, overcoming them is possible through such awareness programmes as this occasion presents,” he stated.

Idris said there were 64 other marine out-stations under the above marine police stations.

However, he identified factors hampering effective discharge of the police functions on the waterways to include poor cooperation from local communities, inadequate infrastructure and platforms, and skilled manpower deficiencies.

The police boss urged greater collaboration among the maritime stakeholders, including the local communities, and special recruitments to fill the gaps in skilled manpower requirements of the Nigeria Police, especially, with regard to policing of the inland waterways.

The paper by chairman of the Nigerian Ship-owners Forum, Mrs Margaret Orakwusi, titled, “Maritime Industry as a Socio-Economic Enabler in Nigeria,” dwelled on the pivotal role of the sector in the country’s development effort.

“Maritime industry is one of the strongest catalysts for socio-economic development across the globe,” Orakwusi stated. She stressed that over 90 per cent of raw materials and finished goods were transported globally by sea.

She said with a coastline of 852 kilometres bordering the Atlantic Ocean in the Gulf of Guinea, Nigeria had abundant marine potential that were, however, largely untapped.

“Nigeria maritime industry must be driven to its full capacity to generate the much needed foreign exchange and skilled and unskilled employment in the face of the dwindling fortune of the crude oil,” Orakwusi stated.

The third paper, “Maritime Technical Development and Operations – An Imperative for Economic Development,” presented by Engr. Emmanuel Ilori, was discussed in a session anchored by Abdulsalam Mohammed. It had as discussants Rector, Maritime Academy of Nigeria (MAN), Oron, Commodore Duja Effedua (rtd), and representatives of the Bureau of Public Enterprises (BPE), Nigerdock, and the Lagos State Commissioner for Transportation.

With a coastline of 852 kilometres, a maritime area of over 46,000 km2, a total freight cost of about $6 billion annually, and maritime component of the oil and gas industry valued at $8 billion, it is without dispute that Mother Nature was generous with maritime potential when she created Nigeria. But the country has faced plenty of challenges in terms of adequate development and utilisation of its latent maritime capabilities. Occasions like the World Maritime Day provide the right atmosphere for the cross-fertilisation of ideas and efforts on how to overcome the challenges.

The World Maritime Day is commemorated yearly by IMO, a specialised United Nations agency, on September 27 at its headquarters in London, but each member state is free to choose any date in the year to mark the day.

The big takeaway from this year’s World Maritime Day celebration in Nigeria, judging by the quality of the discussions and attendance, is that there is a new determination and zeal by stakeholders to overcome the challenges of the maritime industry and move the sector forward. 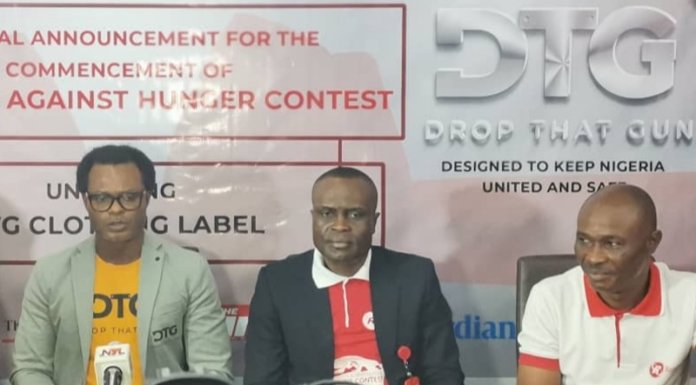