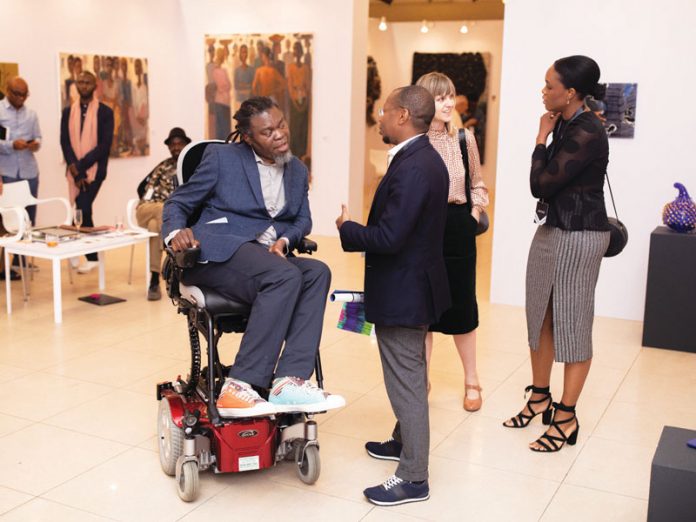 As West Africa’s Premier International Art Fair Art X ends today, the British-Nigerian artist Yinka Shonibare takes the centre-stage as the guest artist for the ART X talks. Yinka Olatunbosun reports on the return of this master as well as the coveted masterpiece, Tutu

Preparations were in top gear. Installations and security drills had commenced when this reporter arrived at the traditional home of Art X, the Civic Centre, Victoria Island, Lagos just a day before the VIP opening to meet the legendary British-Nigerian artist, Yinka Shonibare MBE. On his prompt arrival, the ramp covered in black velvet facilitated Shonibare’s swift movement on wheelchair into building.

From the ground floor, his works which constitute the curated project for this edition of Art X are arranged. His “Venus De Medici’’ can be seen on the first floor as he exhibits alongside other artists from the continent such as Abdoulaye Diarrassouba known as Aboudia (Cote D’Ivoire); award-winning South-African artist and activist, Zanele Muholi; Paul Onditi (Kenya); self-taught sculptor, Cyprus Kabiru; award-winning ceramist Ranti Bam and Joy Labinjo from Nigeria. Others are painter and sculptor, Alimi Adewale and Kelani Abass.

Back to Shonibare who was seen rotating his chair against the Art X backdrop, he – a very amiable character-expressed his excitement at being a part of the third season of the Art X on the invitation of the Art X Founder, Tokini Peterside. Two years ago, he was invited to British Council for the public presentation of Wind Sculpture VI at the Ndubuisi Kanu Park, Ikeja where he also mentored some select art students of the Yaba College of Technology.
“The idea is to bring art to the public in public spaces. It can beautify the environment and so people who would normally not go into art galleries can actually enjoy the work on the streets and in a way, it is democratic and it is making the art accessible to a wider range of people,” he said reflectively.

For him, being a conceptual artist comes with the territory. Art evolves from thought or idea before it is developed into forms.

“Actually, in the world of arts, that is how most artists work these days. If you have a big studio and you are doing more than 20 shows a year, you will need assistance. An architect can’t build all the things by himself. The way that a lot of contemporary artists work now is actually similar,’’ he observed.

Though he wouldn’t call himself a perfectionist, he admitted quietly that it could be difficult sometimes to delegate some work to others. But having worked with the same number of people for more than a decade, he has reached the point where the professionals working with him can almost second-guess what he wants. His works are typically larger than life. Shonibare attributes that to the growing scale of art in the Europe and America. But would he say the same about Nigeria? Not quite. Although Shonibare is up to speed with the developments in the art sector in Nigeria, he agreed that there is so much that needs to be done.

“Your observation is absolutely correct. I understand that a couple of museums are being built at the moment and there is Otunba Yemisi Shyllon Museum which is under construction. There is another museum just in front of the old museum in Onikan. I think all that is going on right now and more spaces have actually opened up in Lagos than when I was living there. I think it is a question of time but I think those spaces will happen here as well,’’ he said with confidence.

Known for cross pollination of ideas, Shonibare picks from literature, current global affairs, art history and classics to give contemporary interpretations. You don’t need to look too hard to see the underlying humour in some of his pieces.

“Humour is important. I think if you want your audience to be interested in your work, you need it. Even if you are trying to talk about serious things, you can put a bit of fun into it. Most of the time, a lot of things I talk about in my works are quite serious but I find a way to make my audience interested and I don’t want to be bored.’’
His works are highly characterised by the use of Dutch fabric also known as Ankara, which is his way of connecting with his history and African background. Though it is quite debatable where the fabrics originated from, they are largely associated with Africa.

Shonibare, a revered Shape Arts Patron is very concerned about the living conditions of persons living with physical and mental disabilities. The Shape Arts had played a pivotal role in the lives of many whose disabilities have been overcome by building knowledge capacity.

“As you can see, I am a wheelchair user, and I think that art should be made accessible to everybody, regardless of your disability or not. In England, there are lots of opportunities for persons with disabilities. I was able to go to art school and university and did my Masters’ degree. You can get around very easily. I think there are still a lot of challenges for people in Nigeria who are living with physical disabilities or any kind of disabilities. I worked for Shape because I wanted to make a contribution to the work that they are doing. But my career took off and I had to stop that job.

“But there are so many things that I will like to do in Nigeria. I want to encourage Nigeria to think about people with disabilities. On our streets, I have seen many children in wheelchairs begging and every child has a brain and it is wasted talent. Those children should be educated so that they can contribute to the development of Nigeria. I hope to come here more often in future. I hope to be part of the effort to support people with physical or mental health challenges,’’ he said.

For leisure, Shonibare goes to cinemas for films and theatres for opera. “I like eating in nice places,’’ he said, smiling at the thought. He embraces his being different with some air of optimism and gratitude.

“Well, I am unique. God doesn’t make many of me. I will rather be an interesting individual than try to follow the crowd,’’ he said.

The biggest surprise awaited everyone at the VIP Preview of the Art X last Friday with 18 exhibiting galleries. Following the welcome address by the ART X Lagos Founder and Director, Tokini Peterside, the CEO, Access Bank PLC, Herbert Wigwe gave a rousing speech on the importance of the fair and its central position in Africa’s art economy. Access Bank Plc, the Gold Sponsor of Art X Lagos, had loaned to the fair Ben Enwonwu’s historical “Tutu’’, a 1974 portrait of an Ife Princess, which was sold at a record-breaking auction earlier this year for £1.2m.

The night’s special guest of honour, Ooni of Ife, Oba Adeyeye Enitan Ogunwusi commented on the homecoming of Tutu.
“We can see from the display of Tutu here today that this is one of the greatest records in our history for the entire mankind. That art piece has actually recorded a milestone all over the world,’’ he declared.
The fair continues today with Shonibare as guest artist at the Art X Talks. 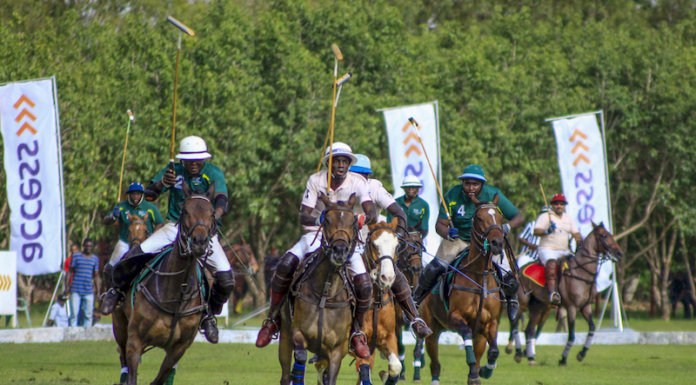