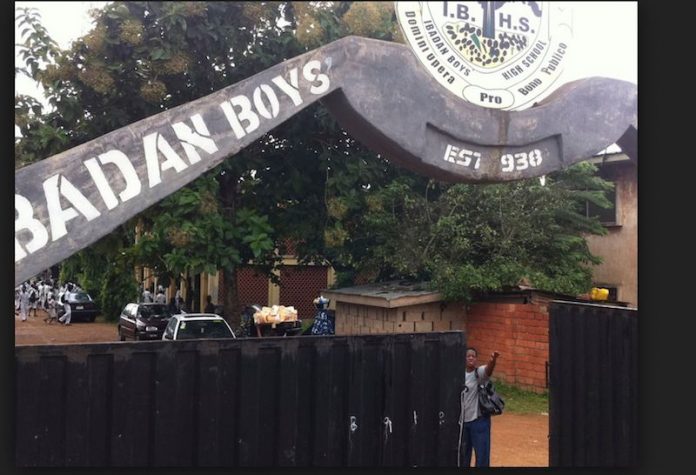 Education is generally perceived as the only liberator from the shackles of poverty and the only catalyst for national development. With this believe, Ibadan Boys High School was born.

Hence, as part of activities marking the 80th anniversary of their alma mater, which has transformed their lives to benefit themselves and the society, dignitaries from all walks of life led by the National President, Ibadan Boys High School Old Boys’ Association, Chief Bode Amao converged on Ibadan, the Oyo State capital to celebrate.

Activities marking the event with the theme ‘Celebration and Intervention’ kicked off on October 24 with the inauguration of projects; the four-day event was rounded up with a gala/dinner night where awards of excellence were conferred on outstanding alumni.

The school began with a visionary man, Chief ‘Layide Oyesina. With only five pupils in a room in his house at Oke Bola, Ibadan in January 22, 1938, Oyesina was an uncommon dreamer.

Armed with the Yoruba proverb that “uneasy lies the head that wears the crown”, Oyesina was not a man who readily takes no for an answer. Within about four months after the school’s commencement, the Ibadan Native Administration saw the doggedness in him and granted him six plots on which he erected a school building.

As if that was not enough, a week or so later, he got six more plots to propagate mass literacy in Ibadan. That was how Oyesina, at 34, started the school he named IBHS, the second oldest private secondary school in Nigeria (now public); the first being Aggrey Memorial Secondary School, Arochukwu, founded in 1931 by another educationist, Dr. Alvan Ikoku.

Prior to IBHS, Ibadan could only boast of the existence of Ibadan Grammar School and Government College, Ibadan established in 1913 and 1929 respectively. Admission to Ibadan Grammar School was strictly for all Church Missionary Society (CMS) missions across Nigeria because it was founded by Alexander Babatunde Akinyele, an Anglican Bishop who had encouraged members of the CMS to establish a secondary school in the ancient city.

The GCI also founded by the Department of Education then in Lagos ensured that admission was not exclusive to neither Ibadan indigenes nor residents hence the resolve of Oyesina, an enterprising Ibadan indigene to change the dynamics by admitting more of his fellow indigenes in order to promote mass education; providing educational opportunities to all eager-learners.

Decades down the line, the IBHS like every other public school has suffered neglect due to underfunding. It became worse with attendant decrepit and dilapidated classrooms until recently when the old boys came together to rescue it from its parlous state and rebrand it for quality learning.

Today, a visitor to the Oke Bola area of the city will be dumbfounded by the turnaround that had taken place in the past few weeks in the school, as activities to mark its 80th anniversary, which climaxed with the presentation of awards to deserving old boys, past and present principals and other spirited members of the public, took off in grand style.

The school is now a beauty to behold as the fence, gate house and drainages have breath life once again into it. What about the paved interlocking from the school gate to all the adjoining classrooms carefully laid to leave visitors in awe? Other projects inaugurated for the anniversary included a multipurpose sports court; ICT facilities/administrative office; e-library; sick bay; water reticulation; renovated science laboratories; renovated Oyesina Hall, among others.

The seed planted 80 years ago has now grown in leaps and bounds producing high fliers in the society, including two former governors of the state; late Chief Kolapo Ishola who was governor between 1991 and 1993; Rashidi Ladoja, the current Osi Olubadan of Ibadan Land, who was governor from 2003-2007.

It was naira rain at the event as individual alumnus and set leaders pledged millions for the second phase of the rehabilitation of other structures in the school including the sports fields, hostel facilities and many more.

One of the awardees and Senior Advocate of Nigeria, Mallam Yusuf Ali was specially recognised for his ceaseless financial support to the school as a worthy ambassador of IBHS. Ali, a passionate philanthropy, according to Amao has been using the Yusuf Ali Foundation, which he is the founder and sole financier to intervene in many public institutions by donating to the scholarship worth N2.088 million to 50 students of IBHS for WAEC and NECO exams.

Ali, the current Vice-President of the school, singlehandedly reconstructed the fence with gate of the school after it was pulled down by the government for road expansion on Oke Bola/Molete axis; special contributions to the success of the 80th anniversary and his latest promise at the grand finale celebration of the school to take over the renovation and complete rehabilitation of another building in the school; donation of a twin dormitory to the University of Ilorin; and donation of an 80-bed hostel to the Osun State University.

For all these philanthropic gestures and others, Amoo who presented Ali with the award of excellence for being the school’s pillar of support, using his hard-earn wealth, professional feats to promote IBHS, also prayed God to repay him in multiple folds.

The highlight of the 80th anniversary of IBHS was the introduction of the annual Bode Amao Lecture, which will hold in October.