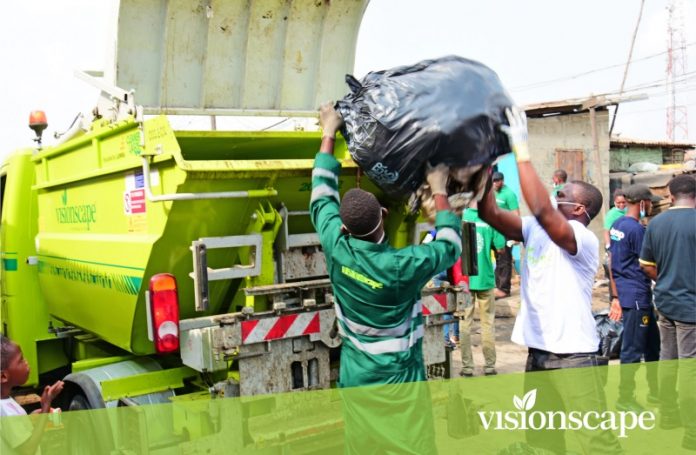 The scheme was designed to effectively manage and dispose over 13,000 tons of waste generated daily in the state, and provide a proactive response to containing the growing rate of waste generated by per person which is expected to increase from1.2kg to 1.42kg in the next 15 years.

Both analysts opined that the mounting heaps of dirt acrossthe state is attributable to the clog in the relationship among operators in the waste management ecosystem, not lack of capacity on the part of Visionscape Sanitation Solution.

According to Egbeyindo, “there is palpable fear amongst PSP operators that Visionscape has come to take away their means of livelihood, just as the Lagos State Waste Management Authority (LAWMA) holds the view that the newly appointed sanitation contractor has come to bite into its pie”.

Under thisatmosphere of suspicion, which triggered thewar of attritionmounted by some members of the Private Sector Participation (PSP),sabotage and unsuppor tiveness, arecertainly some of the reasons the sanitation management system in Lagos seems to have collapsed.

“While making Lagos dirty and embarrassing the government with swelling filth is alikely tacticto discredit Visionscape,the associated environmental and health hazards of the stalled disposal process that evacuates 13,000 tons of waste dailyto the residents of the state is huge”, noted Comrade Ekujumi.

This reality has shown a need for the state government to strategically introduce a process of inter-operability into the state waste management ecosystem. With this, fears will be allayed and operators in the ecosystem will appreciate the need to work together in a collaborative relationship towards a cleaner Lagos.

Specifically,Egbeyindo suggested that “against the revocation of Visionscape municipality waste management contract, it is more advisable that the company is allowed more time to deliver on its promises. The atmosphere has not been conducive for optimal performance, so it is rather early to say the company lacks capacity”.

“Moreso, abruptly terminating the contract, aside from being hasty, also exposes the state to both reputational and financial risks. For instance, the action will adversely affect the state’s credit rating in the domestic and international market, it may impair relationship with group of investors, comprising Pension Fund Administrators (PFAs), Deposit Money Banks and Trustees and Asset Managers with whom the state shares a longstanding relationship”.

“So, rather than squander its A+ GCR and Agusto &Co. credit rating reputation on an issue that could be addressed by process restructuring, the state should systematically the strains in the State’s waste management and disposal ecosystem”.