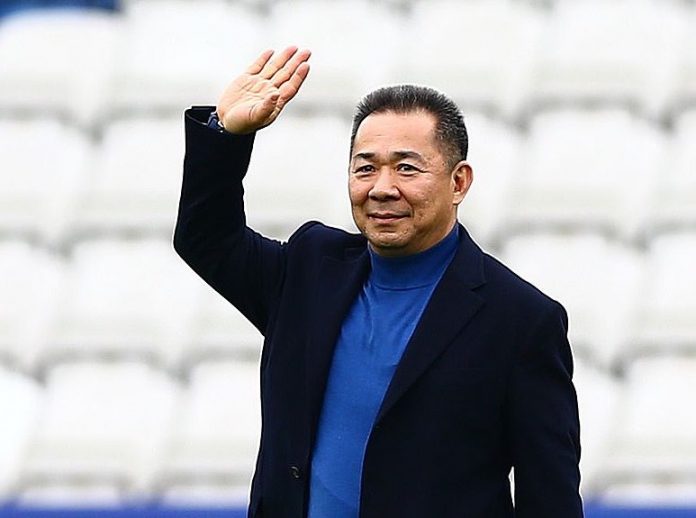 *More tributes pour in from players

The Leicester City FC owner, two members of staff, the pilot and a passenger, all died after the aircraft spiralled out of control outside the King Power Stadium ground.

The club chairman’s wife Aimon and son Aiyawatt Srivaddhanaprabha joined grieving fans and players of the club to lay a wreath at the club’s stadium yesterday.

The President of the Thai FA, Somyot Poompanmoung and his wife, Potjaman Poompanmoung were among some of the callers at the stadium to pay their tribute to the late club owner.

The club’s first team and youth squad are also at the King Power Stadium.

Manager Claude Puel joined his players, while vice-chairman Aiyawatt returned to see the tributes after arriving earlier in the morning when around 200 fans broke into spontaneous applause.

Personalities from the sport and entertainment industries have also been outside the stadium, including the lead singer of Leicester rock band Kasabian, Tom Meighan.

Mr Meighan, who joined grieving supporters, said the death of club owner Mr Vichai was like “losing a member of your family”.

“There won’t be a dry eye among any of the staff today,” he added.

Many of the players have paid tribute to Mr Vichai on social media, including club captain Wes Morgan.

He tweeted: “Absolutely heartbroken and devastated regarding the news of our chairman. A man that was loved and adored by everyone here at LCFC.”

The Air Accidents Investigation Branch said inspectors would be at the crash site until the end of week before transporting the wreckage to specialist facilities in Farnborough.

“In the meantime, we are still gathering evidence as part of our investigation,” a spokesman said.

Italian aerospace company Leonardo, which built the helicopter, said it was “first ever accident involving an AW169 helicopter” and it was “ready to support the AAIB”.

Schmeichel wrote an open letter to the owner in which he expressed his admiration for him “as a leader, as a father and as a man”.

“It is difficult to put into words how much you have meant to this football club and to the city of Leicester,” he added.

England internationals Jamie Vardy, Harry Maguire and Ben Chilwell were among the other Foxes players to pay tribute.

A book of condolence will be opened at King Power Stadium from Tuesday morning and the team’s next fixture against Southampton in the EFL Cup, which was scheduled for Tuesday evening, has been postponed.

Many of Leicester’s players referred to Srivaddhanaprabha as ‘The Boss’.

“I cannot believe this is happening. I am so totally devastated and heartbroken. I just cannot believe what I saw last (Saturday) night. It just doesn’t seem real!” added Schmeichel, who reportedly stayed at the club’s ground until 01:00 BST on Sunday.

“It is difficult to put into words how much you have meant to this football club and to the city of Leicester. We all know about the investment in the football club you and your family have made. But this is about so much more.

“You cared so deeply for not just the club but for the entire community. Your endless contribution to Leicester’s hospitals and charities will never be forgotten. You went above and beyond in every aspect.”

Srivaddhanaprabha bought Leicester in 2010 for £39m, cleared their debts and saw the club win promotion to the top flight four years later. They then beat odds of 5000-1 to claim the Premier League title in 2015-16 in one of the greatest sporting stories of all time.

“You changed football. Forever!” Schmeichel added. “You gave hope to everyone that the impossible was possible, not just to our fans but to fans all over the world in any sport!”

Vardy, whose goals were so important to the club on their unlikely march to the league title, said: “Struggling to find the right words, but to me you are a legend, an incredible man who had the biggest heart, the soul of Leicester City Football Club.

“Thank you for everything you did for me, my family and our club. I will truly miss you, may you rest in peace.”

Wes Morgan, captain of the title-winning side, said he was “absolutely heartbroken and devastated”.

“You were a great person who cared so much about our club, city and everything which came with it,” tweeted Wales midfielder Andy King, who has been at Leicester for 12 years. “Thank you for enabling us to make our dreams a reality and I hope you were as proud of your club as we were of you.”

“You made mine and everyone else’s dream come true,” added Foxes full-back Danny Simpson.

Winger Demarai Gray said Srivaddhanaprabha was “a generous, kind man who always had a smile on his face”.

Forward James Maddison, who joined in the summer said: “Devastated and heartbroken at the news that no one survived the helicopter crash yesterday. Life isn’t fair sometimes.”

Clubs around the UK and Europe have also been paying their respects to Srivaddhanaprabha.

Liverpool owners John W Henry, Tom Werner and Mike Gordon have issued joint statement, saying: “Vichai is a great loss not just to his club but to the Premier League and English football as a whole.

“Srivaddhanaprabha was the ultimate custodian for the club he bought and then gracefully served.

“The Premier League title win, one of world football’s all-time great stories, is of course the standout achievement. But beyond that, he led his club in a manner which all of us in this privileged position aspire to. Success on the pitch, allied with outstanding governance off it.”

Sports Minister Tracey Crouch wrote on Twitter: “Such desperately sad news. My thoughts this morning are with the families and friends of those who died but also the whole of the Leicester City family.

“The grief stricken words of players and fans says it all. He was clearly well liked and will be sorely missed.”