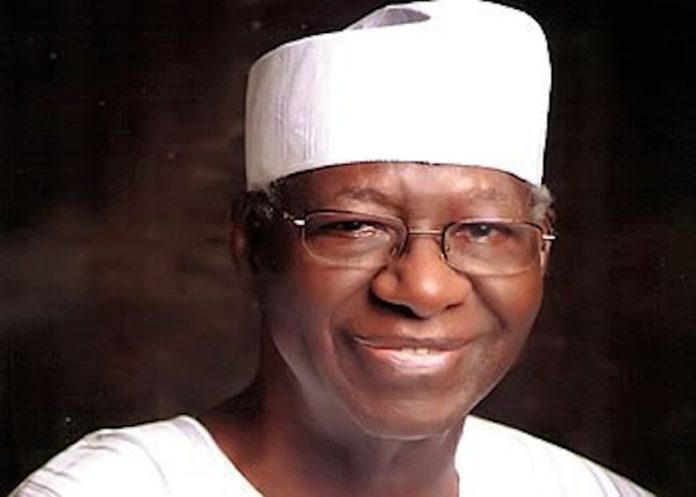 The Nigeria political space was thrown into mourning on Sunday evening as news of the demise of a political colossus, Chief Anthony Akhakon Anenih, took over the social media. The former Chairman of the Peoples Democratic Party (PDP) Board of Trustees (BoT) died at 85.

Born in Uzenema-Arue in Uromi, Edo State on August 4, 1933, Anenih served in the Nigeria Police Force before retiring to do business and politics.

A frontline politician, the Iyasele of Uromi in Esanland, wielded enormous influence when he was politically active during his life time. He bestrode the nation’s political space like a colossus for decades, exhibiting exceptional political skills.

He was the godfather and benefactor of many politicians. He determined who got what, when and how for most part of the 16 years of the reign of the PDP. His uncanny ability to navigate the murky waters of politics with ease was unequalled.

He was a smooth political operator with the ability to separate good plans and strategies from poor ones. Anenih was a master of the game as far as politics was concerned. He knew how to generate support and resources to actualise political plans.

These uncommon qualities made former President Olusegun Obasanjo to call him “leader,” to the envy of other PDP founding fathers. He also earned the sobriquet ‘Mr. Fix It’ not by accident but by his various political exploits. To him, no political challenge was insurmountable. He brought a new dimension to politics by changing how the game was played.

Anenih came into political limelight in 1981 and his first political battle was fought with a strong resolve, vigour and zeal. After retiring as a Commissioner of Police, he went straight into politics. Within a twinkle of an eye, he overtook those before him in a battle of wits. Anenih surprisingly displaced the late Chief Tony Enahoro as the Bendel State Chairman of the National Party of Nigeria (NPN).

It was a feat that could not be ignored. He also confronted former Governor Ambrose Ali, the professor of Morbid Anatomy, who was facing serious internal crisis in the Bendel chapter of the defunct Unity Party of Nigeria (UPN), by rallying forces to install Samuel Ogbemudia as governor. That marked the beginning of Anenih’s meteoric rise to fame.

From that moment, he didn’t look back. In the Third Republic, Anenih was a founding member of the defunct Social Democratic Party (SDP), and was a member of the most powerful caucus in the SDP, led by the late Major General Shehu Musa Yar’ Adua. During the botched presidential primaries, he was Gen. Yar’Adua’s campaign manager. He worked hard for Yar’Adua to emerge as the flagbearer, but the military rulers aborted the primaries.

In 1999, Anenih emerged as a founding father of the PDP. He was the first Minister of Works in the Olusegun Obasanjo Administration. It was a reward for the crucial role he played in installing Obasanjo as President. He was also a member of Obasanjo’s kitchen cabinet. But, critics argued that his attention as a minister was always diverted by the demands of high wire politics.

A dependable ally of Obasanjo before the duo fell apart, Anenih in 2002 declared that there was no vacancy in Aso Rock. The import of the statement was not lost on other PDP presidential aspirants who had wanted to unseat Obasanjo. They developed cold feet. He and the former Internal Affairs Minister, the late Chief Sunday Afolabi, drove Obasanjo’s second term project. During his presidency, Obasanjo always relied on Anenih’s foresight and intelligence in fighting intra-party battles in the PDP.

In his home state of Edo, he was the godfather deciding who gets what in politics. He was instrumental to the emergence of Chief Lucky Igbinedion as governor in 1999 and his reelection in 2003. He was also instrumental to the emergence of Prof Oserheimen Osunbor as governor in 2007. His political stature suffered a brutal bruise when the courts invalidated the election of Prof. Osunbor and declared Action Congress Candidate, Comrade Adams Oshiomhole winner of the 2007 governorship election.

Anenih, on November 26, 2016 announced that he was quitting partisan politics at the launch of his book entitled: “My Life and Nigerian Politics.”

At the book launch, Anenih declared: “I am persuaded that I have no more ambition nor any point to prove in politics. I am, therefore, glad to declare that, from today, I shall be withdrawing from active partisan politics. I shall, however, continue to avail the country of my experience, give suggestions and offer advice, as a statesman.”

In the book, while Anenih acknowledged being called ‘leader’, he was not too favourably disposed to the sobriquet ‘Mr. Fix it.’ This he clearly stated on page 165 where he showed his total disapproval of that appellation.

He said, “I am aware that some people call me ‘Mr. Fix it’. I think such people call me that name, either in contempt or in admiration. It is possible that they are being mischievous. A few questions arise here. Am I “Mr fix It” as a reformer or someone who always does things right? Am I being portrayed as one who gets things settled or fixed? Am I being held out as someone who, by hook or crook, achieves results with the belief that the end justifies the means? In any case, I do not enjoy this appellation. I have always believed in what I do and I always make sure I achieve successes, without listening to the crowd of voices.

If I am called an achiever, that sounds more complimentary, satisfying and positive than the ambiguous impression, which ‘Mr Fix it’ connotes”

Without doubt, Anenih came, saw and conquered the political scene. He saw it all in the power game, which informed why he had to take a bow at 83, when the ovation was loudest. And at 85, he took a final bow.