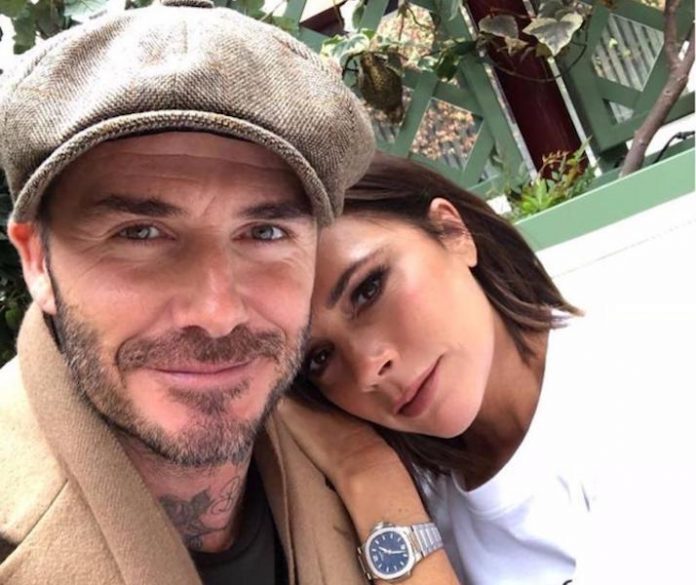 THE Beckhams are facing their biggest crisis in more than a decade as Victoria was left devastated by David casting doubt on their marriage in a bombshell TV interview. Posh Spice, 44, was furious as she flew into Australia recently following what was thought to have been an uncomfortable 22-hour flight together with her unrepentant husband. They arrived just as the full interview aired on Australian TV, showing David divulge further hurtful details about the cracks in their 19-year marriage after branding it “hard work” in a teaser clip for the show last week. Notably, the former footballer failed to speak about his love for Victoria or how much they enjoy spending time together despite two decades of marriage. Instead, he focused on the challenge of keeping the relationship going and ¬praising his wife’s success in fashion. He admitted for the first time that the troubles in their relationship are down to “being away from each other”. Becks told interviewer Lisa Wilkinson: “Marriage is always about hard work. Your children, they want your time and they deserve your time. “We are hard-working and we feel that is the right way to bring up our children, to prove and to show to them that you have to work really hard to be successful.”

Bntry.
‘You made a difficult decision like being away’
He added: “We’ve been married for a long time now.”
Finally addressing why he was missing from last month’s photo shoot with designer Posh, their four children and cocker spaniel Olive, he added: “We did a Vogue front cover which was all about Victoria’s ten years in fashion.

“The amount she’s achieved in a short space of time with four beautiful children.
“You know, we have a beautiful dog.
“Obviously, in her business world, to be on the front cover of Vogue was a huge thing and then we did a separate picture for another cover.
“But to have been married for the amount of time that we have, you know, it’s always hard work.

“Everybody knows that but you make it work . . . a difficult situation like travelling, being away from each other.”
Awkwardly, it has emerged Becks gave the revealing chat to shamelessly promote life insurance ¬company AIA, with whom he signed a megabucks deal last year.
It comes after a hellish weekend for Victoria who was forced to join David on a 22-hour flight and put on a united front ahead of their scheduled appearance at Prince Harry’s Invictus Games.

Amid the drama she spent two nights at a five-star, £950-a-night wellness clinic in Baden-Baden, Germany.
The Sun on Sunday told how humiliated Victoria had spent two days in tears after her husband’s ill-timed comments which have sparked renewed speculation about the state of their marriage.

Yesterday, son Cruz was seen walking with a protective arm around his mum in Bondi as David walked sheepishly behind.
Posh posted a photo of a bottle of ¬Aussie brew Victoria Bitter on Instagram after arriving Down Under.
Friends are expecting the crisis to cause a further rift between the couple, who are worth a combined £670million.
Their marriage has become increasingly strained since the former England skipper decided to launch a new football team in Miami, which has led to him spending time in the US away from his family.

In June the couple quashed rumours of a rift after untrue stories spread on social media that David was linked to another woman.
In 2004, David was accused of having an affair with ex-assistant Rebecca Loos while he was playing for Real Madrid in Spain.

In a post on Instagram, Aussie TV host Lisa admitted she had been surprised by David’s openness when discussing his marriage on her show ¬The Sunday Project.
In his most personal chat, he also detailed how:
• HIS biggest regret was having his hair in corn rows to meet Nelson Mandela
• HIS hopes are pinned on daughter Harper playing professional football after his sons quit the sport

• THEIR kids love their celebrity lifestyle
• HE is the soft parent in his marriage
• HE was brought up to love the Royal Family.
David sat down with Lisa on the eve of his first visit to Australia in seven years.
After admitting he was still shocked by his global popularity, he said kids, Brooklyn, 19, Romeo, 16, Cruz 13 and Harper, seven, loved the perks of their famous upbringing.
He said: “They don’t dislike it to be honest. They enjoy it as well. There’s a few benefits.
“I know I’m stricter with the boys than I am with Harper.”

‘I want to set the right example for my kids’
He also admitted that some of his hairstyles had been ¬dreadful — and said the one he regretted the most was when he met former South ¬African president Nelson Mandela.
He said: “There I was with one of the greatest and inspirational men and I’ve got corn rows.”

Unsurprisingly, his other regret involves fashion, describing his sarong as “good at the time”.
David, who has attended both Prince Harry and William’s weddings, recalled how he was brought up to love the royals.
He said: “My nan was the biggest fan of the Royal Family and it was passed down to me. I’m very proud of that.”

He has spent time in Afghanistan with the armed forces, and praised Harry for founding the Invictus Games four years ago.
An ambassador for the sports competition, David praised the “incredible” idea for changing the lives of the wounded servicemen, women and veterans who take part.

He added: “I’ve always been a big ¬supporter of the armed forces.
“Sport’s such a powerful tool to give them the opportunities to get over the injuries and hard times they have been through.”

It’s now five years since David retired from football and at 43 years old the former Manchester United winger admits keeping himself fit is increasingly tough — though looking after his children keeps him busy.

Responding to a question plugging his AIA life insurance campaign, he said: “It’s a struggle when you get older, waking up in the morning getting all the kids out of the door and out of school on time. I want to set the right example for them.

“Three or four times a week I walk my daughter to school instead of driving her to school, or she bikes home with me. It’s the little things that make a real ¬difference.”
On Harper, he confessed how she was his final hope of continuing to fly the football flag for him.
He said: “She still plays on Sunday. She enjoys it.
“None of the boys play any more apart from at school. . . so maybe it’s going to be my daughter.”

Hypocrite David put his kids in spotlight
By Katie Glass
LAUGHING about his fashion mistakes, his parenting style and walking his daughter Harper home from school, David Beckham seemed his usual charming self during his interview on Australian TV – until he was asked about media intrusion.

“The thing we have to do,” he said, “is protect our children.” Sorry – WHAT?
Isn’t this the same father-of-four whose kids just posed for the cover of Vogue?
Have you heard of David Beckham’s children – Brooklyn, 19, Romeo, 16, Cruz, 13, and ¬seven-year-old Harper?

Of course you have. How could you not?
The Beckhams promote their kids any chance they get.
Their clan feature in ¬interviews, sit front row at fashion week and flog goods.
Protected from the spotlight? It seems they are bathing in it.

Romeo became a Burberry model when he was just 12.
At 11, Cruz released a Christmas pop single after signing with Justin Bieber’s star-making manager Scooter Braun. Last year Brooklyn launched a photography book.
Little Harper’s name has been trademarked since she was five.

The Beckhams are worth some ¬£670million, so their kids hardly need to earn their keep.
Yet they are promoted as part of Brand Beckham’s family assets.
While normal mums worry whether to share their kids’ pictures online, the ¬Beckhams constantly post private snaps, capitalising on their lives.
The couple share family moments – birthdays, haircuts, cuddles, playtime, ¬family dinners, holidays and nights out – all broadcast to their combined 74.7million fans.

You don’t see this with all celebrities’ kids
They turn private moments into clicks and “likes”, building a social media following that boosts the Beckham brand.

You don’t see this promotion with all celebrities’ kids.
When Robbie Williams’ daughter Teddy acted as a bridesmaid at Princess Eugenie’s recent wedding it was the first time the six-year-old had been seen. Williams ¬prefers to keep her out of the public eye.

Prince Harry has said he doesn’t want his child with Meghan Markle to have a royal role. Harry – knowing the intense scrutiny public life brings – wants his kids to enjoy a relatively normal life.
Similarly, Stella McCartney is careful to keep her four kids under wraps, never posting on social media about them.

No wonder she was said to be furious when David Beckham posted a picture of her daughter Reiley, then aged six, with Harper at Buckingham Palace.
Showing the girls on Harper’s birthday in July last year, David captioned the photograph: “Happy 6th birthday. . . have the most amazing day we love you pretty lady x”.
It was a cherished moment which, shared, encourages people’s interest in the lives of ¬Beckham’s children.

I once interviewed Beckham. I found him charming.
He trilled about his children while promoting his whisky brand. (Notably, this current interview was to shamelessly promote an insurance brand for which he is global ambassador).
After many years, he was practiced at handling the press.
He’d also chosen, as an adult, to be famous.
But hearing him talk now about protecting his kids from media interest I just wonder, did they have that choice?
How is their privacy protected?

20 Years Since September 11 Terror: Lessons for US and Africa