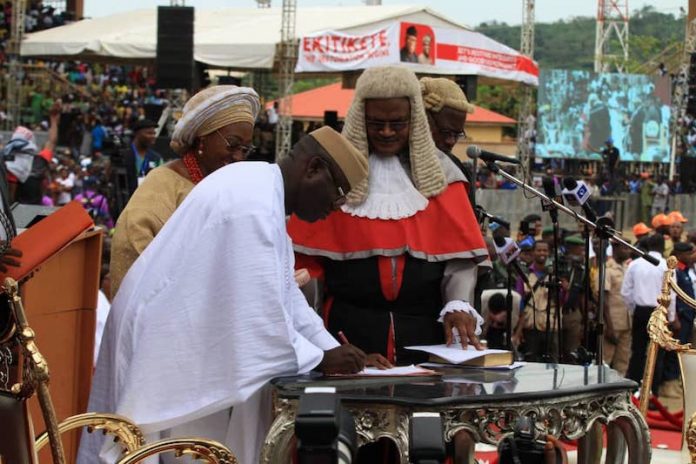 Having been elected in the fiercely contested July 14 governorship election, former Minister of Mines and Steel Development, Dr. Kayode Fayemi, was yesterday sworn in as the new governor of the state, with President Muhammadu Buhari expressing unwavering confidence on the ability of Fayemi to deliver democratic dividends to the people.

Fayemi has also announced his first set of appointments.

Fayemi trounced the candidate of the Peoples Democratic Party (PDP) in the poll, Prof Kolapo Olusola, with a marginal victory of about 19,028 votes.

Buhari, who was represented at the event by the Secretary to the Government of the Federation (SGF), Mustapha Boss, said Fayemi as a former member of the Federal Executive Council (FEC) had persistently be disturbing him about the development of the state.

Fayemi , who was dressed in white Agbada and brown cap to match was sworn in by the Chief Judge of the state, Justice Ayodeji Daramola, amid cheers from admirers and party members that filled the main bowl of the Ekiti Parapo pavilion along old Iyin road, Ado Ekiti capital city at about 11.45a.m.

Earlier, his Deputy, Chef Bisi Egbeyemi, took the oaths of office and allegiance at about 12.20p.m.

The governor also inspected the guard of honour after the police parade that ushered in his government.

The president added that Fayemi would afford him the opportunity to redirect Ekiti State to the path of greatness and abundance in terms of economic prosperity.

Buhari pleaded passionately with Ekiti voters over his reelection bid in 2019, saying he has a lot to offer Nigerians if given the opportunity to be reelected during the contest with former Vice President Atiku Abubakar, the presidential candidate of the PDP.

He said: “I know Dr. Fayemi very well; he has always cherished anything that has to do with the development of this state. As Ekiti State governor between 2010 and 2014, he instituted some laudable projects that impacted positively on the lives of the people and this pavilion was one of them.

“I know that he will do what is right to justify this mandate. I charge him not to relent in his efforts to serve the state with passion, commitment and candour.

“The federal government has given supports to states in the areas of bailouts, budget support, ecological funds and Paris club refunds, of which Ekiti State was a beneficiary.

“We have extended the standard rail project to Ekiti State and the construction of the federal secretariat will soon be completed. The federal government is also planning to dualise Ado-Akure road and reconstruct Ado-Ikare road for the use of our people. We have also built another 133kva power source in the state that will be inaugurated soon.

“As of today, 11,000 Ekiti indigenes are benefiting from the N-power programme of this administration.

“We are confident that Fayemi will help cover the lost grounds brought by past administration. From today, you will begin to have a new breath in the state under the present government”, Buhari said.

Speaking earlier, Fayemi said his government would work hard to bring succour to the populace, by removing the cankerworm of corruption that has eaten deep into the state’s fabrics under the PDP-led government of Governor Ayodele Fayose.

He revealed that all the finances of the last administration shall be reviewed but not in a vindictive manner, saying this became imperative to ensure that the culture of prudence and financial propriety are brought to bear in governance of the state.

Fayemi lamented that the state is indebted to the tune of N170 billion being loans taken to undertake some projects through the last administration, assuring that this challenge won’t impede his government from delivering dividends of democracy to the citizens.

The former Minister stated that Ekiti under him won’t slide and degenerate to the level of allowing school children to pay various taxes in their quests to receive formal education.

He promised that his government shall reinstate the N5,000 social security to the elderly and make tremendous positive impacts in the areas of agriculture, social investment and economy.

“In the last four years, Ekiti was governed by a rudderless, inept and egregiously corrupt government, which was led by those who deceived our people through the instrument of stomach infrastructure.

“In our quest for economic rejuvenation, our government shall invest heavily in youth in commercial Agriculture because Ekiti is basically agrarian, reactivate community based projects, tap into our tourist potential and ensure security of local and foreign investors.

“As of today, the debt profile and other financial commitment hanging on the state look challenging, but with your supports, we shall overcome. The light shall shine again. We shall celebrate our core values of scholarship, knowledge, hard work, unity and strong characters bequeathed to us by our founding fathers.

“We appreciate our fathers who fought for the creation of this state in 1996 and I want to assure them that we shall keep the flag flying and make sure we don’t disappoint them by fulfilling their dreams and aspirations within the next four years.

“We shall network with the federal government and other local and international bodies to bring dividends of democracy.”

Meanwhile, Fayemi has announced his first set of appointments.

In a statement released yesterday evening, the new governor named Mr. Abiodun Oyebanji as Secretary to the State Government (SSG).

The governor also named Mr Biodun Omoleye as Chief of Staff to the Governor, and Mr. Yinka Oyebode as Chief Press Secretary.

Oyebanji, a former University lecturer, had previously served as Chief of Staff during the administration of Otunba Niyi Adebayo, and was Commissioner for Budget and Economic Planning during Fayemi’s first term.

Omoleye, a former University administrator and former Chairman of Ijero Local Government, had also served as Special Adviser in the Governor’s Office.

Oyebode, a seasoned journalist served as Chief Press Secretary to the Governor during Fayemi’s first term. He later served as Special Adviser on Media to him when he was Minister of Mines and Steel Development.

The appointments are with immediate effect..