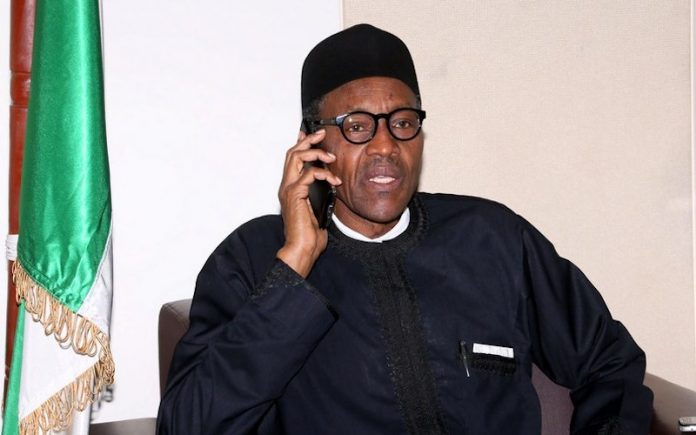 President Muhammadu Buhari yesterday in Abuja spoke with Mr. Mohammed Leman, the father of Hauwa, the International Committee of the Red Cross (ICRC) midwife, who was executed by Boko Haram terrorists on Monday.
He said the government did everything possible to save her life.

The president, according to his Senior Special Assistant on Media and Publicity, Malam Garba Shehu, in a statement, commiserated with the family, through a telephone call, assuring the deceased’s father that the Nigerian government did everything possible to save his daughter’s life.
According to the statement, the president expressed sadness that all the efforts made were unsuccessful.
It also said the president regretted that the late midwife’s commitment to helping victims of Boko Haram insurgency ended in such a brutal way.

The statement added that Buhari also spoke with the President of the ICRC, Mr. Peter Maurer, extending his condolences to him on the loss of the midwife.
It also said the president commended the ICRC for the great work the committee had been doing in Nigeria, including the provision of healthcare services to victims of insurgency in some of the affected areas.
“President Buhari appealed to the ICRC to continue their services in Nigeria, and not give up, despite the unfortunate and painful loss of their staff.

“According to the president, Nigeria needs the ICRC and the government will continue to do all it can to protect staff of the organisation and other aid workers that are providing much-needed humanitarian services in the North-east region, which had been affected by almost a decade-long conflict,” the statement added.

The presidential candidate of the Peoples Democratic Party (PDP), Alhaji Atiku Abubakar, in his reaction condemned the killing of Hauwa.
In a statement by his campaign organisation, he described the incident as a crime against humanity.
He said, “While nothing can bring her back, the Atiku Abubakar Presidential Campaign Organisation wishes to assure the family of the innocents, whose lives have been brutally cut short, that we will continue to work with our partners in Nigeria and the international community to ensure that those who are still in the captivity of the terrorists and their allies are rescued alive.

“We pray to Almighty God to grant the family fortitude and succour in these trying times. We also pray for God to be with our security forces and grant them every advantage over the enemies of our nation.”
Atiku called on all Nigerians to continue to support the armed forces as they take the battle to the terrorists and their sponsors.

The Senate also condemned the killing in strong terms, noting that humanitarian workers who work in crisis zones to provide necessary support for victims are most selfless and courageous persons and, therefore, should never be targets of harm.
It observed a two-minute silence in honour of Leman following a motion raised by the Deputy Senate President, Senator Ike Ekweremadu, and subsequent debate on the issue, where the Senate resolved to pay official condolence visit to the family of the deceased.

Senators further resolved to ensure that the federal government, through its security agencies, takes necessary measures to secure the freedom of both Leah Sharibu and other surviving members of the ICRC being held hostage by the insurgents.

Speaking on the resolution, Senate President Bukola Saraki said, “Distinguished Colleagues, irrespective of the decision that we have taken, I believe that our committees on defence and security, as part of their own responsibilities, should engage with the security agencies to find out if there are other issues that need to be addressed in order to prevent the reoccurrence of such sad incident.”

He also commiserated with the family of the deceased and the ICRC over the unfortunate incident and stated that the Senate would continue to work with the nation’s armed forces to stop the killings and improve security across the country.

Hauwa, 24, was killed Monday after the expiration of the deadline given to the federal government to meet certain conditions before she and her colleague as well as Sharibu could be freed.
She became the second aid worker to be killed by the terrorists who abducted three nurses and midwives from Rann, Borno State on March 1, 2018.

Saifura Hussein had earlier been killed about a month ago leaving only Alice Loksha Ngaddah as the sole person still held hostage by the terrorist group, which is a faction of the Boko Haram group.
The ICRC in a statement yesterday by its spokesperson for Nigeria, Aleksandra Mosimann said, “A second health worker held hostage in Nigeria has been murdered. It’s utterly devastating that we have to write that sentence.”

It added, “The ICRC received information indicating that Leman has been killed by her captors in a despicable act of cruelty. Hauwa is the second abducted health worker in Nigeria to be murdered in the last month.”

In a quote credited to ICRC’s Regional Director for Africa, Patricia Danz, read, “The news of Hauwa’s death has broken our hearts,” adding, “We appealed for mercy and an end to such senseless murders. How can it be that two female healthcare workers were killed back-to-back? Nothing can justify this.”

In the statement, Hauwa was described as full of life, becoming a midwife at an early age, “People who knew her described her as a sociable, dynamic and enthusiastic woman, who was much loved by family and friends. She was truly dedicated to her work helping vulnerable women in her family’s home area.”

“Hauwa and Saifura’s deaths are not only a tragedy for their families, but they will also be felt by thousands of people in Rann and other conflict-affected areas of North-east Nigeria where accessing healthcare remains a challenge. We urge the group holding Alice and Leah to release them safely,” Danzi was also quoted as saying.

Also reacting, Amnesty International stated that the killing of Hauwa constituted a war crime, as the perpetrators demonstrated a brazen disregard for her life.
In a statement made available to THISDAY yesterday and signed by the Director of Amnesty International Nigeria, Ms. Osai Ojigho, the body said it was wrong to kill Hauwa, who was only providing desperately needed humanitarian services to people affected by the conflict in the North-east

She noted that under international humanitarian law, all aid workers must be protected from attacks.
According to Ojigho, “Boko Haram must immediately and unconditionally release the remaining health worker, Loksha. As news of these grizzly killings emerges, the Nigerian authorities must re-double their efforts to rescue the hundreds of civilians still detained by Boko Haram – including 15-year-old Leah Sharibu, who was abducted from her school in Dapchi town, and the remaining Chibok girls.
“All those responsible for war crimes and other human rights violations and abuses in Nigeria must be brought to justice in a fair trial,” she said.

Similarly, a human rights group, the Global Amnesty Watch (GAW) expressed shock over the murder.
A statement yesterday in Abuja by Tom Lever, in-charge of its Africa Regional Office, described Hauwa’s killing as barbaric, unacceptable.
He said such an act must be met with the harshest retribution possible to serve as deterrence to Boko Haram and any other terror group in the world that the sacredness of human life is not to be toyed with.
According to him, “Killing another aid worker whose only crime is dedicating her life to make life better for others confirms that Boko Haram has sunken to its lowest level of weakness yet.”

The Bring Back Our Girls (BBOG) yesterday marched to the Presidential Villa in protest over the brutal execution of Hauwa.
The group expressed fear that the failure to release the 15-year-old Sharibu, could lead to a dire consequence.
The BBOG procession left Unity Fountain along Shehu Shagari Way early in the morning. But the protesters were, however, prevented by security operatives before they approached the Presidential Villa’s first gate.

The Chairman of BBOG, Edith Yassin, joined by the co-convener, Mrs. Obi Ezekwesili and other group leaders, including Nifemi Onifade and Gapani Yanga, described the killing of Hauwa as extremely shocking and heart-breaking news.
She said the group was gutted by the deeply regrettable consequences of government’s failure in preventing her death.
The movement echoed concern about the heightened threat to the lives of both Ngaddah and Sharibu which had become imminent in the light of the threat issued by their captors.

’’ Yesterday Leman mother, called me to say that her daughter had been killed but I never confirmed the execution to her because it would make her miserable. But given that Saifura was killed by the terrorists, there is clearly a danger to the other captives who are extremely vulnerable to atrocities of the terrorists. Such concerns must not be taken lightly and we join our voice to those of their families, the employers of Alice and Hauwa, of UNICEF and ICRC, respectively, as well as others around the world to demand for immediate actions that will avert any tragic loss of life. Mr President, you must act now and deliver results of immediate rescue,” Yassin said.

She tasked government to ensure the safe return of all people held captive, including the remaining 112 Chibok girls. She also called on Buhari to match his words and promises to secure the release of all Nigerians abducted by terrorists with firm actions that will yield results, saying no other outcome that will be acceptable.
The BBOG leader reiterated the exact seven demands the group tabled during its last protest last month, adding that nothing had changed regarding the engagement of the federal government on the issue it raised on that occasion.