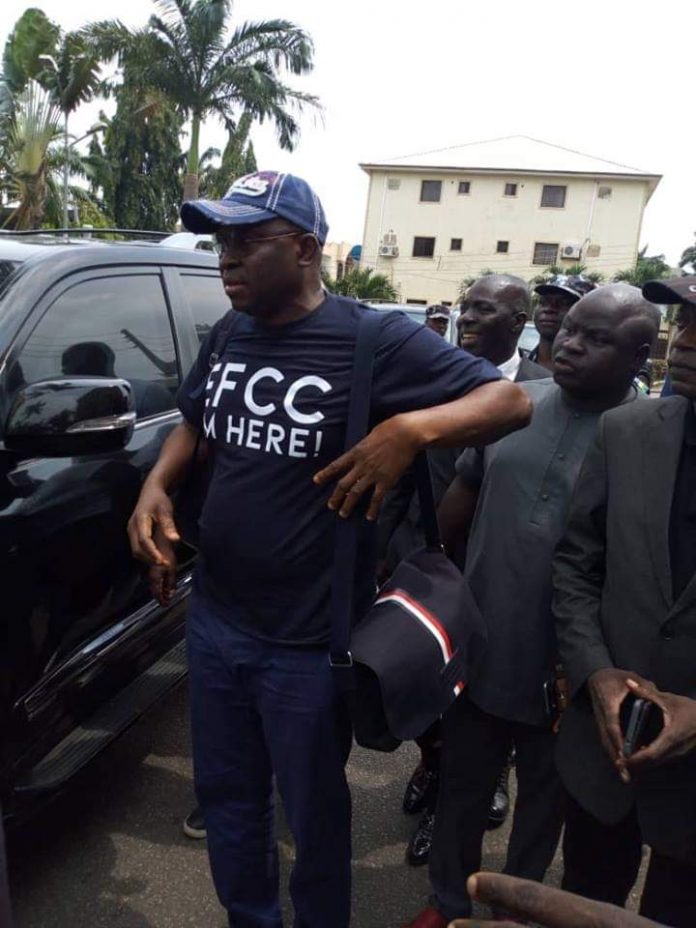 The immediate past Governor of Ekiti State, Mr. Ayo Fayose, Tuesday arrived the Abuja office of the Economic and Financial Crimes commission (EFCC) to answer to corruption allegations against him by the federal government.

Fayose, who wore a blue T-shirt with the inscription ‘EFCC I am Here’, told reporters he was at the commission in line with his promise to honour the EFCC invitation on October 16, 2018.

He was also carrying a small bag with him.

“I’m here in line with my promise that I would be here on the 16th of October and like I said to EFCC, they should await my arrival.

“This morning, they have been to my house, they cordoned off my street. I feel personally it is unnecessary, its unwarranted. When a man says he is coming, Nigerians should be given the benefit of the doubt,” he said.

He assured Nigerians that he was prepared to answer any question they ask him, adding that he would respond appropriately.

Also speaking, Rivers State Governor Wike, who decried EFCC’s harassment of the former governor, warned that the commission should ensure that Fayose comes out healthy just as he was going in.

However, after a short address, he was welcomed by one Katugo, a member of staff of the commission, who assured supporters and lawyers of the governor that the commission would treat the former governor with due respect.

He was then led into the Idiagbon House of the EFCC to answer to charges of corruption, accompanied by Wike, a former Minister of Aviation Femi Fani-Kayode and three of his lawyers including Chief Mike Ozekhome (SAN) at exactly 1.04pm.