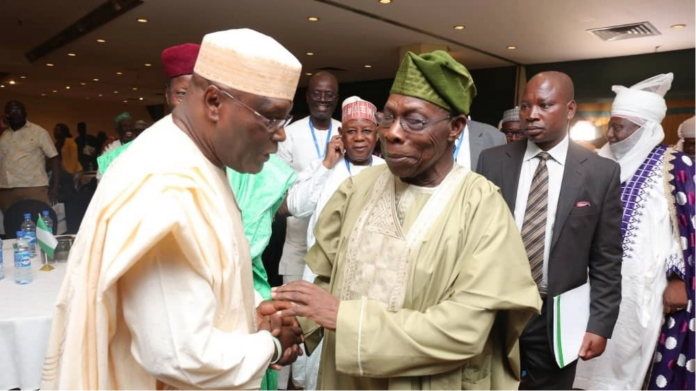 Details of how former President Olusegun Obasanjo was persuaded to support the presidential aspiration of Alhaji Atiku Abubakar, the candidate of the Peoples Democratic Party, have been revealed.

Many Nigerians were surprised that Obasanjo, who despite his earlier vow not to support the presidential ambition of Atiku, his former deputy, eventually gave his blessings to the PDP candidate.

THISDAY gathered that the pan-Yoruba socio-political organisation, Afenifere, played a significant role in making the former leader change his mind on Atiku.

Afenifere, in collaboration with leaders from the South-east, South-south and the Middle Belt regions under the Southern, Middle Belt Leaders Forum and the Northern Elders’ Forum, had declared that they would only support a presidential candidate whose programme will guarantee restructuring and they resolved that Atiku was the candidate that deserved their blessing in 2019 because he had listed restructuring as one of the major agenda of his government if elected.

In a telephone conversation with THISDAY on Sunday, Afenifere’s National Publicity Secretary, Mr. Yinka Odumakin, said the leaders convinced the former president that Atiku was the only candidate with a clear agenda on restructuring.

According to him, “In the course of our visit to Chief Obasanjo last Tuesday, we explained to him the position we have taken with our colleagues across the country; the Middle Belt Elders Forum, the Northern Elders Forum, the South-east and South-south Elders Forum, that restructuring will form the basis of our support for any candidate in 2019.

“We also told him that since he is an important person in our community within the South-west that it will not be good to be on a different page with him.

“When responding to our decision to back Atiku, he said for him, national interest overrides personal feeling. He said some people had been reaching out to him that they wanted him (Atiku) to see me, but that since we came to him and spoke on his behalf he would give the appointment.

“Chief Obasanjo also said anytime Alhaji Atiku will be coming he would want us to be there and that was why we were present at the meeting.”

THISDAY had reported exclusively that Obasanjo was under pressure from close friends and political allies to support Atiku’s presidential bid and that those urging him believe the former president has genuine intention for Nigeria.