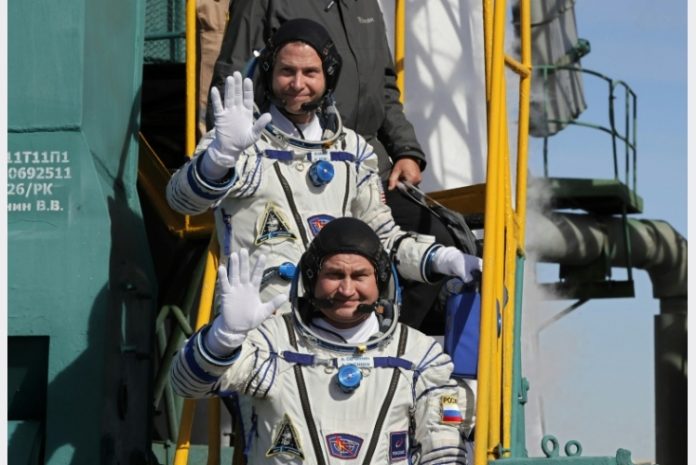 The two-man crew of a Soyuz rocket made a successful emergency landing Thursday after an engine problem on lift-off to the International Space Station, in a major setback for the beleaguered Russian space industry.

US astronaut Nick Hague and Russian cosmonaut Aleksey Ovchinin were rescued without injuries in Kazakhstan.

“The emergency rescue system worked, the vessel was able to land in Kazakhstan… the crew are alive,” the Russian space agency Roscosmos said in a tweet.
AFP / Kirill KUDRYAVTSEV The rocket was launched from the Baikonur cosmodrome in Kazakhstan

The pair are in contact with ground control, the space agency said.

Over the past few years the Russian space industry has suffered a series of problems including the loss of a number of satellites and other spacecraft.

The rocket was launched was from the Baikonur cosmodrome in Kazakhstan at 0840 GMT.

“The launch had a problem with the booster (rocket) a few seconds after the first stage separation and we can confirm now that the crew has started to go into ballistic descent mode,” the voiceover on a NASA livestream from mission control in Houston said.

The NASA commentator later said the crew was in good condition and communicating with rescue workers after landing east of the Kazakh city of Zhezkazgan.

The descent was sharper than usual meaning the crew was subjected to a greater G-force, but they have been prepared for this scenario in training, the commentator said.

A source in the Russian space agency told AFP that rescue workers had reached the crew.

Roscosmos’s online stream of the launch cut out shortly after lift-off.

The International Space Station — a rare point of cooperation between Moscow and Washington — has been orbiting the Earth at roughly 28,000 kilometres per hour since 1998 and will mark its 20th birthday in November.

Hague was born in the same year the United States and the Soviet Union launched their first joint space mission, the Apollo-Soyuz, or Soyuz-Apollo mission in 1975.

Dmitry Rogozin, a firebrand nationalist politician who this year was appointed by President Vladimir Putin to head Roscosmos, said on Twitter he had ordered a state commission to probe the accident.

Rogozin was flying to the scene of the emergency landing, the space agency said.