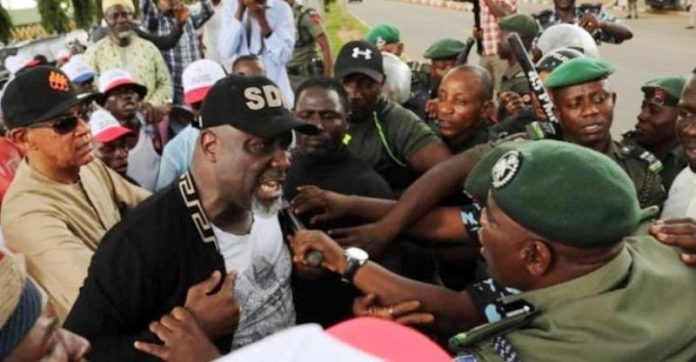 In order to stop the police from any attempt to arrest them for staging a protest to the National Headquarters of the Independent National Electoral Commission (INEC), the Senate President, Dr. Bukola Saraki; Senators Dino Melaye and Ben Murray-Bruce, yesterday dragged the Inspector General of Police, Mr. Ibrahim Idris to court.

While the IG was cited as the 1st Respondent in the matter, the Commissioner of Police in the FCT was sued as the 2nd Respondent.

The applicants were among leaders of the opposition Peoples Democratic Party (PDP), who marched to the office of the electoral body to protest against the outcome of the Osun State governorship election.

In the suit marked FHC/ABJ/03/095/2018, the applicants, through their lawyer, Mr. Mahmud Magaji, a Senior Advocate of Nigeria (SAN), prayed the Federal High Court in Abuja to declare that the harassment that was given to them by the Police during their peaceful protest on October 5, including the teargas that was fired at them, amounted to gross violation of their fundamental human rights.

Saraki and others also urged the court to declare “that the threat, intimidation and unlawful harassment of the applicants by the agents of the 1st and 2nd Respondents via a letter of invitation wherein the applicants were directed to appear before the agents of the Respondents on October 8, 2018, is illegal, unconstitutional and a gross violation of the applicants’ fundamental right as guaranteed under section 34 and 35 of the Constitution of the Federal Republic of Nigeria 1999( as amended) and Article 11 of the African Charter on Human and Peoples’ Right (Ratification and Enforcement) Acts, Cap 10 Laws of the Federation of Nigeria.

They also prayed the court to set aside the invitation letter with respect to “the lawful and peaceful procession organised by members of the Peoples Democratic Party on October 5, 2018”, in addition to an order directing the Respondents to jointly and severally, pay them the sum of N500 million as pecuniary and exemplary damages arising from humiliation, intimidation, harassment and unlawful attempt to arrest them by the 2nd Respondent.

However, no date has been fixed for hearing of the suit.