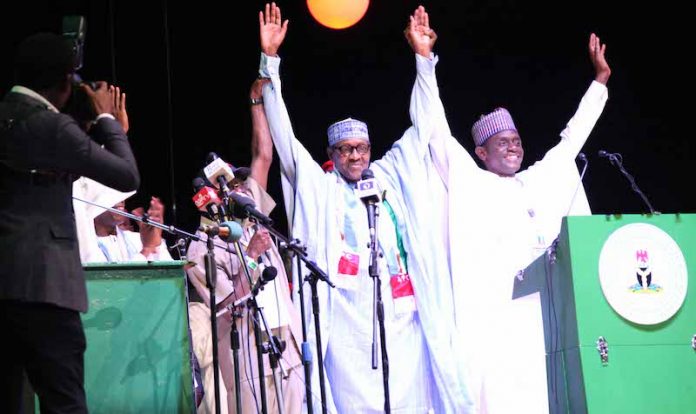 The All Progressives Congress (APC) last night at the Eagle Square, Abuja, affirmed President Muhammadu Buhari as its presidential candidate for the February 16, 2019 presidential election with 14, 842, 72 votes from the direct primaries held on September 29 across the country. Buhari’s affirmation was done through a voice vote at a session led by the governor-elect of Ekiti State, Dr. Kayode Fayemi. Kano and Lagos states had the highest number of votes at the election with over 2.9 million and 2.2 million votes, respectively.

In his acceptance speech, Buhari highlighted some of his achievements since he came to power in May 2015 to include improvements in security and the economy, saying, “We are very proud of our record.”

APC National Chairman Adams Oshiomhole declared at the meeting that the party was ready for next year’s general election.
And in contrast to the confrontational mood of the last few days following the APC governorship primary election in Lagos, the governor, Akinwunmi Ambode, national leader and former governor of the state, Bola Tinubu, and the governorship candidate of the APC, who defeated Ambode at the primary, Babajide Sanwo-olu, sat together, looking very cheerful and pleased. Ambode and Sanwo-olu were the cynosure of all eyes as they, contrary to expectations, walked into the convention ground together. They sat together along with the Ambode’s predecessor and Minister of Power, Works and Housing, Babatunde Fashola.

Buhari said, “We have arrested and checked the slide to anarchy on the security and economic fronts.
“Boko Haram is reduced to dastardly attacks on soft targets. Normalcy has returned to much of North-east and neighbouring North-west states.
“Our currency has stabilised. Our reserves are now $44 billion, a lot higher than we had in 2015.

“Power generation capacity has reached 8,000 megawatts against less than 4,600 when we came into office. As we invest in new power generation infrastructure we are strenuously working to address the legacy deficiencies and challenges of transmission and distribution networks across the country.”

Also speaking, Oshimhole said the purpose of the convention was to affirm the candidacy of Buhari for next year’s presidential election. He said through the encouragement of the president, the party leadership chose the option of direct presidential primaries even when the president wasn’t sure of the number of presidential aspirants that would emerge.

Oshiomhole said, “We are feeling a sense of pride. In 2015, the opposition party had only one form given only to the sitting president. Somebody went to court to contest it. He was told that it was only one form that was available…ordinary Nigerians voted to decide if you should seek a second term.

“Today, we want to share with you the number of APC members who came to vote to nominate you. We thank you all who voted for him,” he said.
Oshiomhole said the convention would be used to resolve some policy issues bordering on reconsideration of the party manifesto with a view to bringing out what had been done in the last three years by the federal and state governments controlled by APC.

He said the party had a lot of achievements to sell to Nigerians, stressing that APC would look into the record of the presidential candidate of the Peoples Democratic Party (PDP). If the person had served before as a state governor, he would be attacked on the basis of his failure, Oshiomhole said.
Oshiomhole added that when the electioneering begins, APC would not be celebrated as the largest party but as the smartest and most progressive party.

After announcing the total votes cast during the direct primaries, some delegates murmured that the total number of votes cast was small. But Fayemi disagreed, saying the 14.8 million votes were cast only by card carrying members of the APC.
According to him, there are several other Nigerians who do not belong to any political party that would freely cast their votes for the president at the forthcoming presidential election.

Earlier at the convention, Chairman of the Convention Planning Committee and governor of Oyo State, Abiola Ajimobi, in his welcome address, recalled that about this time in Lagos in 2014, Buhari was elected as the party’s candidate for the March 2015 presidential poll. The governor said since Buhari became president in 2015, the country had become a better, just and more purposeful. He added that APC, as the largest party in Nigeria, had opened a new chapter in the annals of the country’s political system by opting to elect its presidential candidate through direct primaries.

Advising delegates not to be distracted by what he described as the ranting of the opposition, Ajimobi pointed out that they all had a tasking job to do and hence must join hands with the presidential candidate in the forthcoming general election.
The convention ended about 1.25am.