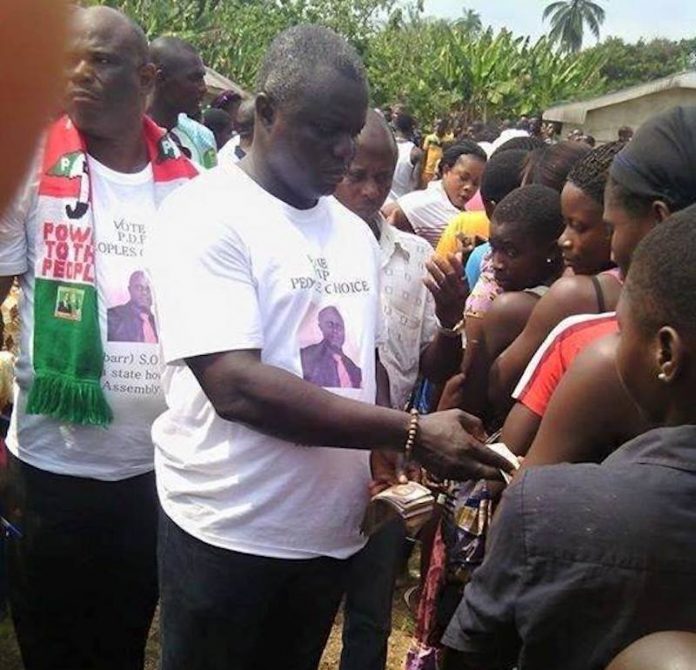 Bob MajiriOghene Etemiku writes that money will continue to influence voting, particularly among the poor

During the timeline allocated for Nigerians to get Permanent Voter Cards (PVCs), venues for the exercises were usually packed.  About 90% of these prospective voters were Nigerians within the 20-30 age-brackets. This perhaps conveyed the idea that the most productive arm of the Nigerian economy, the youth, were ready to execute the will behind the Not-Too-Young-to-Run idea. This supposition had not come far-fetched. A report ascribed to the Brookings Institution had said that with over 87 million Nigerian poor people, Nigeria had overtaken India as the poverty capital city of the World. About three months or so ago, one of the richest men in the world, Bill Gates when he visited Nigeria had said that the reason Nigeria is backward is because substantial investments have not been made in two key areas which affect young people especially – education and health. Furthermore, a report by the Bill & Melinda Gates Foundation, the Goalkeepers had said that poverty in places like Nigeria is rooted in violence, political instability, gender inequality, severe climate change, and other deep-seated crises. It’s also tied to other problems, including high rates of child mortality and malnutrition. As a result, today’s poorest people have significantly fewer opportunities than most of the billion people who escaped poverty during the first two waves.

In certain cosmopolitan cities like Benin City, conversations one often picks up at the newsvendor’s and from sometimes plying public transport would suggest that Nigerians are ready for a fight with their PVCs. Most of the gist indicates that there is a strong interest in Nigerians to put the full weight of the power of their PVC to use to alter the recurring decimal of poverty in the Goalkeeper report. But a recent experience from an interaction with a struggling taxi driver in Benin City put to question assumptions on the so-called power of the PVC. The following conversation between me and this young taxi driver took place recently.

ME: Ah, my friend how we country na?

ME: (Looking closer at him, I assume he’s from up North. Then I let off a couple of my best Northern lingo) Ina kwana mallam? Antashi Lafia kwo?

Taxi Driver: (He looks at me and appears bemused). I’m not Hausa sir. Am from Benue sir.

ME: Ah, so and so is your brother. I hear he is trying his hands on being president. What do you think are his chances?

Taxi Driver: He’s very rich o …and very shrewd. He behaves like a slow poison for the most part but when he strikes he can be very deadly.

ME: But what’s the use of his money in today’s Nigeria? Everyone is wise now o.

Taxi Driver: No mind am. A stingy man he is. Instead of spending the money on poor people around his base he allows it to gather mucus inside his house. I hear most times they burn the money…millions and millions which have spent so much time in his vaults unused to the extent that the money becomes useless.

ME: But na wa. People are suffering yet some are just piling up the money just to let it gather mucus and then just burn it.

Taxi Driver: But oga others are not like him sha o!

Taxi Driver: The others dey maintain o. They know the elections are very close so they open up their doors and encourage you to visit and pass time with them. One of them who I told my mother was sick prayed for me ehn.  I thought this was a prayer warrior politician. He even dashed me plenty money.

ME: Let him win first…let the campaigns come and go na.

Taxi Driver: Oga I know…this is the only time you can ever see them like this. Four years ago after our man win we no fit smell him gate again…four years! Before that time he used to come to our joint to play draft with us.

ME: Na so them be. But I know say you guys are ready for them with your PVCs.

Taxi Driver: Yes o. We ready. Anyone wey come wey go collect our own before he win and come disappear.

ME: Ehn, you want to collect the money and vote for them? That’s selling your conscience! It’s an offence in the eyes of the law.

Taxi Driver: We don wise up. Anyone wey come wey dey collect from am. See how wey dey take do am. If na PDP first come, we collect. Then APC go wan give us more than PDP…we dey collect both of them o.

ME: Ehn, ok, which one of them do you then vote for after you collect from both of them?

ME: But how una dey take make the arrangee? How them they contact and give una the money so that you go vote for them?

ME: So? How you go take collect your money?

Taxi Driver: Oga, if you go there, they will still interact with you to continue to know where you stand. Una go plenty there shao. When they are sure say you dey their side them go feed una well well…but no be just the food o.

ME: Them will give you money for there?

Taxi Driver: Yes…them celotape am under the plate of food for you so that you no fit use your phone take record as them give you money.

ME: Okay, how will they know that you actually voted for them?

Taxi Driver: The money under the plate is like first instalment…on the day you vote, they will ask you to put your hand on their party logo and take a photo with your phone as evidence. After that you collect the remainder…na so.