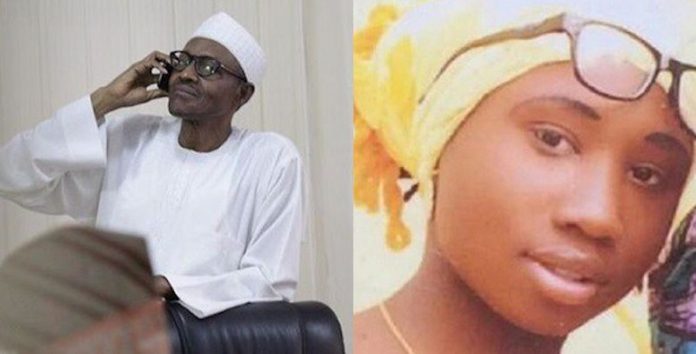 Omololu Ogunmade in Abuja
The presidency said yesterday that President Muhammadu Buhari made a telephone call to Mrs. Rebecca Sharibu, mother of the Dapchi Secondary schoolgirl, Leah, being held captive by Boko Haram.

Leah, is the lone Christian girl held back by Boko Haram terrorists, when 105 of 110 girls kidnapped along with her on February 19, this year were freed by the terrorists on March 21. Five others were reportedly dead.
But Leah was denied freedom because she refused to renounce her Christian faith.

In a statement yesterday, Senior Special Assistant to the President on Media and Publicity, Malam Garba Shehu, said Buhari assured Sharibu that his administration would do everything it could to rescue her daughter from captivity.
According to the statement, the president consoled the Sharibu family and assured the parents that the federal government would deploy every power within its reach to ensure the safety and security of Leah.

“I convey my emotion, the strong commitment of my administration and the solidarity of all Nigerians to you and your family as we will do our best to bring your daughter home in peace and safety,” the president was quoted as saying.
The statement also said the president assured the mother that his heart was with both her family and the entire nation which he said had continued to pray for the safe return of “our daughter, Leah.”