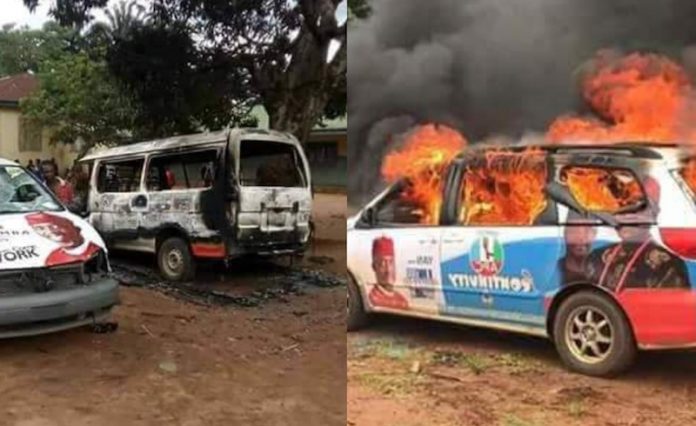 One person was yesterday reported dead at Orodo ward, while three buses were burnt down in Amike, Mbieri all in Mbaitoli Local Government Area of Imo state as violence marred the primary election of the All Progressive Congress (APC) the state.

For the role played by the Nigeria Police in preventing Senator representing Imo East (Orlu Zone) in the upper chamber of the National Assembly, Sen. Hope Uzodinma from moving out of his residence in Omuma in Oru East LGA of the state on Sunday, the State Commissioner of Police, Dasuki Galadanchi has been redeployed temporarily.

The primary election which took place at Party’s headquarters along Okigwe road, opposite Imo State University, Owerri and in other party offices in the respective wards and Local Government Areas did not take place as party members turned out but could not find logistics to go on with the election.

As at 1 p.m., there was neither voting materials nor membership registers of the party in sight in all the ward voting centers monitored.

Not even party officials conducting the primaries were sighted. Before any sign of commencement of the exercise, one person had already been reported dead at Orodo ward, three buses had been burnt down in Amike, Mbieri all in Mbaitoli council area of Imo state.

Trouble started in Amike, Mbieri when a pro-government politician, Sunny Onyegbula, believed to be in support of the candidature of Uche Nwosu, former Chief of Staff and son in-law to Governor Rochas Okorocha was confronted by his kinsmen and dissuaded from shortlisting delegates at the polling centre, who the locals believe may be induced with money to vote for Nwosu against the aspiration of their son, the Deputy Governor, Prince Eze Madumere, who is also from the area.

An eyewitness who spoke to our correspondent in strict anonymity, said that, “For challenging him, Onyegbula made a call and not long after three buses loaded with thugs stormed Amike, Mbieri ward voting centre where men, women and youths were lined up waiting for the commencement of the primaries.

According to the source, the thugs on arrival, started shooting sporadically, harassing elderly men and women of the community and anybody else who was in sight.

Apparently angered by the situation, the youths of the community mobilised themselves and resisted the invaders.

In the exchange that followed, three buses were set ablaze and two persons brutally
stabbed.

Meanwhile, it seems that the election in the state has been canceled as stakeholders were asked to proceed to a popular hotel near the Government House for possible harmonisation.

Meanwhile, for the role played by the Nigeria Police in blocking and preventing Senator Hope Uzodinma from moving out of his residence in Omuma in Oru East LGA of the state on Sunday, the State Commissioner of Police, Dasuki Galadanchi has been redeployed.

Galadanchi’s sudden movement was not unconnected with the request by Uzodinma who allegedly asked for his removal in order to provide a level playing ground for all aspirants.

The Nigeria Police high command has posted Ali Ganja to take over from Galadanchi until after the primary election.