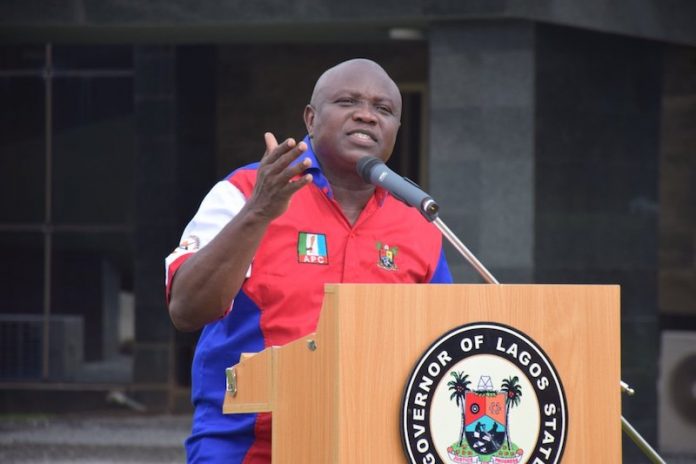 For the first time since the All Progressives Congress (APC), Lagos State Chapter has been enmeshed in a succession battle, the state Governor, Mr. Akinwunmi Ambode, has warned that the plan of some party leaders to edge him out of the governorship race would no doubt jeopardise the re-election bid of President Muhammadu Buhari and Vice-President Yemi Osinbajo.

Ambode also revealed that his main challenger, Mr. Babajide Sanwo-Olu, was improper and unfit to govern Lagos, noting that he had been arrested and detained for months in the United States for spending fake dollars in a night club and that he had gone for rehabilitation at Gbagada General Hospital.

He disclosed this at a world news conference he addressed at the State House, Alausa Sunday on diverse issues relating to the APC governorship primary election rescheduled to hold Monday in 245 wards and 20 local government areas across the state, warning against the plan to manipulate the process of the primary.

There has been uncertainty about Ambode’s re-election after Sanwo-Olu, currently the Managing Director of Lagos State Development and Property Corporation (LSDPC) and former Commissioner for Works & Infrastructure, Dr. Obafemi Hamzat, declared their intention to challenge the governor in primary election.

As a result, the Mandate Movement, a powerful political machine of the National Leader of the APC, Senator Bola Ahmed Tinubu, endorsed Sanwo-Olu for the governorship contest, thereby heating up the state’s political climate ahead of the primary election scheduled to hold Monday.

With the presidential intervention, the APC leader Tinubu decided to consult the GAC, the state’s highest advisory political organ comprising 22 APC chieftains across the three senatorial districts. But in its resolution, the GAC directed Ambode and the two other aspirants to go for the direct primary election.

At the news conference, Ambode noted that he was not afraid of fair political contest, though warned that the APC should not fritter away opportunities before it “to allow the opposition party to win the 2019 governorship election in the state”.

Specifically, Ambode noted: “If we allow the opportunity before our party to fritter away, we will be jeopardising the Buhari/Osinbajo ticket on which I am 100 per cent standing for. But other aspirants cannot deliver the ticket for the party.

“I will not stand here on the mandate of the people of Lagos and allow the APC to fritter away that opportunity to put in somebody that the opposition will easily kick out because of credibility. So, I appeal to all our leaders, they should have a rethink. This is not about me. It is about the greatest opportunity that APC has to change the progress of Nigeria to better a place.”

Apart from the threat to the Buhari-Osinbajo re-election bid, Ambode disclosed that the aspirant being put up to compete against him “is not fit and proper person. This is the truth that the party leaders and members have been misled to understand that the aspirant is a better candidate than myself”.

“I have done everything in the last three years and a half to serve people selflessly. This particular aspirant has been arrested for spending fake dollars in a night club in the United States. As a result, he was detained for months. He knows that he does not have the competence to do what he is being propelled to do.

“The records are there in the Gbagada General hospital, Lagos. This is somebody that has gone for rehabilitation before. We do not want to go so far. We know our leadership should have a rethink because this is the true position,” he explained.