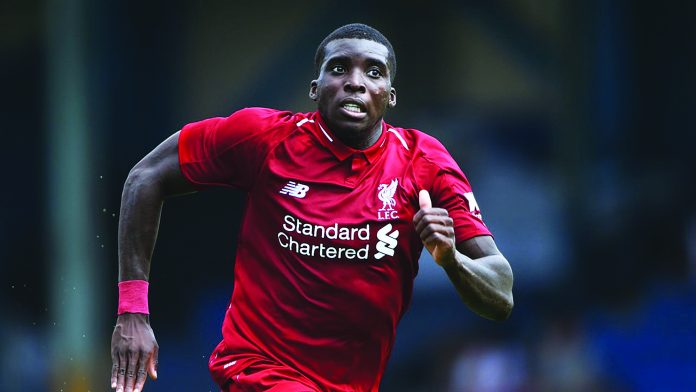 When the President of the Nigeria Football Federation, Amaju Pinnick said there is no Nigerian, even if they have four or five passports, are always excited being Nigerians, he seems to know what he was saying as another British-born Nigerian-Sheyi Ojo had declared his intention to don the green-white-green colours of the Super Eagles as against the Union Flag of the Three Lions

Ojo, who was born to Nigerian parents in Hertfordshire, has revealed that he would ‘never turn down’ the three-time African champions but rather think about the call before making his decision.

“To be honest, I don’t know much about it (Nigeria interest), but if they call me I’d be honoured to go to Nigeria,” Ojo told BBC Sport.

“It’s obviously a massive nation. I’m just really focused on club football at the moment, but I’m excited about the future, both club and country.

“My parents are originally from Nigeria as well, so they know a lot about it. They’ve always been keen on the idea (to represent Nigeria) but so far I’ve mainly been focusing on club football.

“It’s starting to get to the time where I have to start thinking about my future. And of course, if Nigeria were to call me now it would be anhonour.

“Of course, if I was to get selected I’d definitely think about it, I’d never turn down Nigeria.

“I’m from Nigeria originally so it’d be an honour, likewise with England as well. If I keep doing well, opportunities will come by for club and country.

“It’s not really something I’m thinking about at the moment but you never know what could happen in the future.”

NFF boss, Amaju Pinnick had reiterated severally that youngsters of Nigerian origin who are doing well in England and other leagues will wear the Nigerian colours at the appropriate time.

“The initial plan was to take our players in the various clubs, but now, what we are trying to do is what we call VIP scouting – talking to these young players that are playing abroad to play for their fatherland. No Nigerian, even if they have four or five passports, they are always excited about being Nigerians. I can assure you that we shall get them to play for us at the appropriate time,” Pinnick said.

The Liverpool loanee who moved to the French Ligue 1 on a season-long loan this summer could also join the growing list of England-born players in Gernot Rohr’s set-up.

Ojo joined Liverpool as a 14-year-old and came through their academy. He spent time on loan with championship clubs Wigan Athletic and Wolverhampton Wanderers before making his competitive debut for Liverpool in January 2016.

He joined MK Dons’ academy when he was 10 years old. By the age of 13, he had played for the Dons’ U-18 side and was training with the first team squad. During his time at the club, Ojo became the first MK Dons, trainee, to receive an international cap at youth level.

On 11 November 2011, Liverpool beat off competition from a host of Europe’s top clubs including a multimillion-pound offer from Chelsea to sign Ojo, then 14, for an undisclosed fee believed to be in the region of £2 million. In April 2014, Ojo was joint top scorer alongside fellow Liverpool player Harry Wilson in the prestigious U-17 Future Cup.

Having made a number of appearances on Liverpool’s bench over the festive period, Ojo joined Wigan Athletic on loan in February 2015. Five days later, he made his professional debut coming on as a 59th-minute substitute for Wigan in a championship match against AFC Bournemouth, with Wigan naming Ojo as their Man of the Match after he had a positive impact on the game.

In August 2015, he scored the winning goal for Liverpool in a friendly against Swindon Town, after which Liverpool announced that Ojo had signed a new long-term contract with the club and confirmed that he would join Wolverhampton Wanderers on a season-long loan. He made his Wolves debut on the opening day of the 2015–16 championship season as a substitute, coming on in the 84th minute and picking up a yellow card as his side went on to beat Blackburn Rovers. Three days later, he made his first start for Wolves in a 2–1 League Cup win over Newport County.

Ojo made his Premier League debut on 20 March 2016, replacing Joe Allen in the 87th minute in a 3–2 loss away to Southampton at St. Mary’s Stadium. Three weeks later, he made his first start for Liverpool in the Premier League against Stoke City at Anfield, where he assisted Daniel Sturridge for Liverpool’s second goal in a 4–1 win, before being replaced.

Ahead of the 2016-17 Season, Ojo sustained a fracture in his back and did not return to first-team training until mid-November.

On 16 August 2017, Ojo joined Fulham on a season-long loan and scored a brace in a 5–4 win over Sheffield United, he scored the winning goal in a 1–0 win over Birmingham City in December.

On 30 August 2018, Ojo signed a new contract with Liverpool and joined Stade de Reims on a season-long loan.