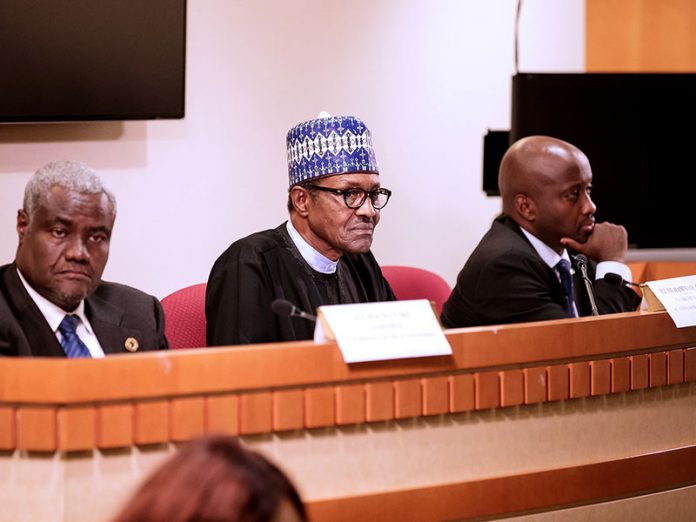 He told the participants that he had “enlisted the support of multi-lateral institutions like the World Bank, IMF, security agencies, and friendly nations to locate and recover and help repatriate stolen assets.”

Special Adviser to the President on Media and Publicity, Mr. Femi Adesina, in a statement, said the president recalled how he embarked on a trip to the Middle East in the first quarter of 2016 to canvass the return of stolen assets and simultaneously hand over the culprits for trial in Nigeria.

Furthermore, the statement added that the president also recalled that in March 2016, the Nigerian government and its Swiss counterpart signed a letter of intent on the restitution of forfeited assets illegally acquired in Switzerland to pave the way for repatriation of $321 million illicitly acquired.

According to Adesina, Buhari noted that arrangements had been put in place for the monitoring, assessment and reporting of the United Nations 2030 Goals on Sustainable Development.

He also said Buhari appealed to Africans in the Diaspora to come up with suggestions aimed at combatting the menace of corruption on the continent.

The statement also said Buhari described corruption as a “cancer” which could only be checked by global efforts, recalling the negative impact of corruption on the continent.

It also said the president acknowledged the massive social and economic costs of corruption and illicit financial flows, lamenting that they have continued to impede growth and development of Africa.

The statement also said Buhari cited a study conducted in 2015 by an African Union Panel headed by former South African President, Thabo Mbeki, which it said estimated the flow of $50 billion illicit funds out of the continent every year.

“According to the report, about US$2.5billion of the US$50billion of Illicit Financial Flows was in respect of commercial activities.

“It is obvious that the continent still battles with grand corruption at the highest level, with Safe Havens, opaque systems in many recipient countries and the outright willingness of some advanced countries to harbour stolen funds from Africa,” he was quoted to have said.