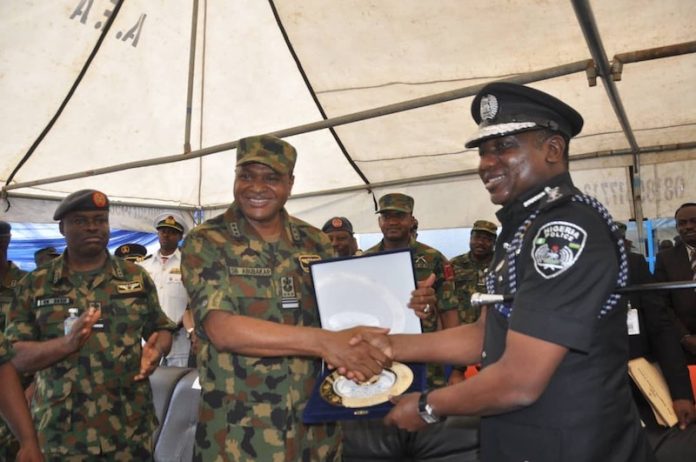 In a bid to reduce the risks and threats that could impede its operational effectiveness, Chiemelie Ezeobi reports that it was a return to the old order for the Nigerian Air Force, with its remodelled forensic laboratory to aid criminal investigation

One of the greatest challenges in investigation is often the lack of preservation of crime scenes and forensic equipment. This defect has often marred the outcome of investigation. To fill this lacuna gap, the Nigerian Air Force (NAF) recently inaugurated its remodelled forensic laboratory in Lagos. Already, 16 of its personnel have been trained on core crime investigative skills. Noteworthy is the fact that training of provost personnel in Forensic Investigation was last conducted 30 years ago in the service. Thus it was a return to the old order for NAF with these new moves.

At the inauguration of the new 057 Provost Investigation Group Headquarters building and the Nigerian Air Force Forensic Crime Laboratory in Lagos, the Chief of Air Staff, Air Marshal Sadiq Abubakar, said the NAF had embarked on the conduct of various specialist trainings for the personnel who would be required to man this group for effective operation.

Abubakar said after a gap analysis of the structure of the NAF, it had become obvious the new expanded NAF structure required a law enforcement arm with the capacity to effectively employ scientific approaches in all facets of its critical competencies. He said it was in the fulfillment of this requirement that the inauguration came to being.

According to industry watchers, the execution of this project was in fulfillment of one of the key drivers of Abubakar’s policy which centres on human capacity development through robust and result oriented training for enhanced professional performance.

Accuracy of Analysis
On the forensic laboratory, he said: ”
Accuracy in the collection review and analysis of evidence by law enforcement agencies and the ability of the courts to fairly judge the strength of evidence is the bedrock of criminal justice administration. With the rapid growth of technology the rate and extent of crime have increased exponentially while detection of infractions has become even more difficult.

“The Nigerian Air Force, being a part of the larger society is also faced with this challenge and must, as a fighting force explore ways to reduce risks and threats that could impede its operational effectiveness. Indeed a critical factor in achieving our desired level of the secured and conducive environment for all NAF personnel to discharge their duty without encumbrances.

“Accordingly, having conducted a gap analysis of the structure of the Air Force it was obvious that the new expanded NAF law enforcement arm with the capacity to effectively employ approaches in all facets of its critical competencies, in order to enhance security and discipline in the service.

The training was in conjunction with the Sustainable Criminal Justice Solution Team from the United Kingdom.
On the training Abubakar said: “As a facility, we have embarked on the conduct of various specialist trainings for the personnel that would be required to man this group. Already in conjunction with foreign partners development from the Crime Scene from the United Kingdom, we have trained 16 provost personnel in the core investigative skills and Interview Course, while another set of 16 personnel will in four days’ time be concluding Investigation Course here in 057 Provost Investigation Group.

” Permit me to mention that training of provost personnel in Forensic Investigation was last conducted 30 years ago. Another investigative capacity of the provost would be enhanced through the training of 10 Provost officers in the Advanced Detective Course at the Police Staff College Jos, within the Iast quarter of the year. Akin to the development of investigative and forensic skills, the Nigerian Air Force is also at an
advanced stage of expanding enhancing its utilisation of Military Working Dogs to boost the physical security of NAF critical mission essential areas. This growth is equally projected to create the capacity for the Air Provost to be integrated in the conduct of Combat Search and Rescue operations in the service. In the same vein, 740 Air Provost personnel will commence the Force Protection in Complex Air Ground Environment training, in conjunction with the British Military Advisory Training Team.

Furthermore, the CAS revealed that the rejuvenation of the Air Provost’s Explosive Ordnance Detection capability is projected to commence by the end of this year. He said; “The Nigerian Air Force’s recent push to make inroads in the development of the capacity and capability of the Air Provost is premised on the need to have a proactive police force, that would nip threats in the bud and provide the enabling environment for NAF personnel to freely discharge their duties in furtherance of the constitutional/responsibilities.

“This is in line with my vision to reposition the Nigerian Air Force into a highly professional and disciplined force through capacity building initiatives for effective efficient and timely employment of airpower in response to Nigeria’s Service’s national security imperatives. May I reiterate my charge to all personnel of the Air Provost to develop foresight founded on the following first the need to be innovative and pursue advances in policing including ideology models and concepts, in order to effectively meet the demands of contemporary policing. Secondly, the expectation to be flexible enough to interface and work alongside other security agencies to create synergistic approach towards law enforcement and security.

Lastly, the imperative to be objective and fair in your dealings in order to gain support from the majority of people.
“The laudable efforts by the Nigerian Air Force in building capacity could not have been possible without the determined support of the president. Accordingly, I wish to express our gratitude and unflinching loyalty to the president and Commander-in-Chief President Muhammadu Buhari, for his leadership, determination in providing the enabling environment for the Nigerian Air Force to keep discharging its statutory responsibilities despite other contending imperatives.”

IG’s Remarks
The Inspector General of Police(IGP) Ibrahim Idris, who was the special guest of honour, said he was delighted to inaugurate the newly constructed Headquarters building of 057 Provost Investigation Group and the remodeled forensic laboratory.

He said: “Forensic Science is an integral part of the criminal justice system. It is vital in aiding the investigation of a crime and detection of criminals, as well as proving the innocence of people suspected of crimes that they did not commit. Without the objective evidence obtained through scientific analysis, many crime cases would have gone unsolved and the perpetrators unpunished. It is thus, a veritable tool for not only detection and prosecution, but also deterrence.”

The IGP said that evidence was the cornerstone in modern police investigation, adding that witnesses could fall, be misunderstood, be influenced or contaminated, adding that, ‘a well preserved and analysed evidence does not.

“This effort by the Chief of the Air Staff in providing a befitting and functional environment and making inroads in the application of forensics in policing is laudable. It is a testimony of the Nigerian Air Force leadership’s commitment to push the boundaries, and improve on the methodologies and technological platforms to detect and analyse evidence of crime in the service,” he said.

Moving forward he said: ” Undoubtedly, the intricate nature of modern day criminality requires scientifically based information through detailed analysis of physical evidence as offered by Forensic science. This allows the application of scientific knowledge and methodology to legal problems and criminal investigations.

“The overall aim is to discover and analyse patterns of criminal activities. While the world had moved forward in the use of forensics in carrying out constructed criminal investigations, Nigeria is yet to develop sufficient capacity in this regard both in the civil police and the military.

“As such, the provision of these facilities will enhance the capacity of provost personnel in carrying out their duties, especially in the area of criminal investigations. These would significantly assist Air Provost lnvestigators in obtaining credible evidence for successful prosecution of cases in a court of law while at the same time adding to the country’s crime fighting resources.”