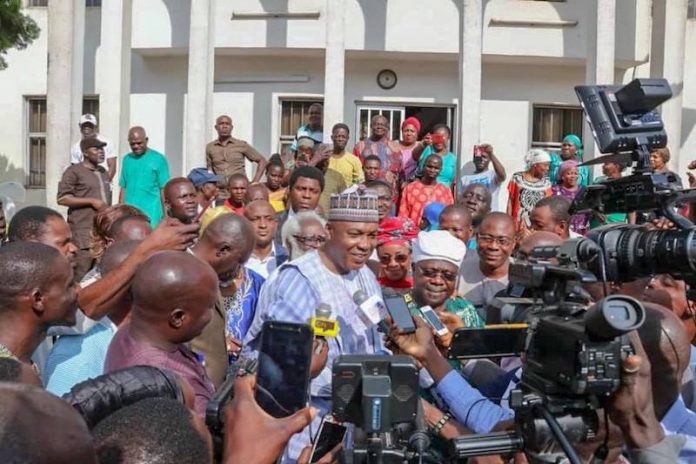 Ahead of Thursday’s supplementary governorship election in Osun State, the Peoples Democratic Party (PDP) has begun to rally opposition party against the ruling All Progressives Congress (APC), which came second in last Saturday’s election that was declared inconclusive by the Independent National Electoral Commission (INEC).

The PDP candidate, Senator Ademola Adeleke, had polled 254,698 votes to APC’s Gboyega Oyetola, who polled 254,345 votes, leaving a margin of 353 votes, which INEC said was lower than the 3,498 votes cancelled in seven polling units spread across two local government areas of the state.

The Social Democratic Party’s candidate, Senator Iyiola Omisore, came third in the election.
The PDP, which has also headed to court to challenge INEC’s declaration, is talking to other opposition party to form an alliance against the ruling party.
Leading the charge is Senate President Bukola Saraki, who is the head of the PDP campaign for the election in the state.

He met Omisore yesterday in Ile-Ife as part of the efforts to rally a coalition for Adeleke against Oyetola in the essentially two-corner fight on Thursday.
Disclosing the outcome of the meeting, Saraki in his tweeter handle revealed that both parties had agreed to work together.

‘’I thank Senator Iyiola Omisore for the warm reception he and his people gave me and members of my entourage in Ile-Ife today (Monday). We have agreed to work together because our goals are the same,’’ he stated.

According to him, “We all want good governance in Osun State. Over the next 24 hours, we will work out the details. Our discussion will definitely be useful for the growth of democracy in our country; the development of Osun State and its people; as well as for future engagements among political players.

“From now on, it will be a win-win situation for the State of the Living Spring and Nigeria, in general.’’
After the collation of all the results from the 30 council areas of the state, Adeleke of the PDP had 254,698 while the candidate of APC, Gboyega Oyetola, polled 254,345.

The INEC said the rerun would take place in seven polling units located in Orolu, Osogbo, Ife North and Ife South council areas on Thursday.
Although the PDP is concentrating on Omisore, whose strongholds the rerun election would be holding, THISDAY sources said the party has reached out to other candidates, believing that it is important to secure as much support as possible in other to make victory certain.

Meanwhile, the PDP has resolved to approach the court to quash the INEC declaration of the election as inconclusive.
In a press statement by the party’s spokesman, Mr. Kola Ologbondiyan, yesterday, it insisted that the polls had already been concluded and results announced in all polling units and collation centers, thus bringing the exercise to its lawful conclusion and removing INEC powers to declare the election inconclusive.

“Our electoral law is clear that once an election result is declared, INEC is bound to return a winner. INEC, in trying to play the card of the defeated APC, contravened the law by refusing to announce a return, even when the declared results have thrown up a winner,” the party argued.

“Section 69 of the Electoral Act 2010 (as amended) states that inter-alia in an election to the office of the president or governor whether or not contested and in any contested election to any other elective office, the result shall be ascertained by counting the votes cast for each candidate and subject to the provisions of sections 133,134 and 179 of the constitution, the candidate that receives the highest number of votes shall be declared elected by the appropriate Returning Officer.

“Concurrently, Section 179 (2), (a) (b) of the constitution directly prescribes that “a candidate for an election to the office of governor of a state shall be deemed to have been duly elected where, there being two or more candidates – (a) he has the highest number of votes cast at the election; and (b) he has not less than one-quarter of all the votes cast in each of at least two-thirds of all the local government areas in the state.”

The party further submitted that INEC’s action in declaring a concluded election as inconclusive was, therefore, an annulment, totally duplicitous, constitutionally illegal, ultra-vires and as such null and void.
The PDP demanded the immediate arrest and prosecution of the Osun State Governorship Election Returning Officer, Prof. Joseph Fuwape, for succumbing to the pressure of the APC and declaring a decided election as inconclusive.
It said, “We demand that INEC Chairman, Prof. Mahmood Yakubu, immediately summon the courage to do the needful by declaring our candidate, Senator Ademola Adeleke, as winner.

“It is completely ludicrous, that INEC and the APC are now attempting to divert the narrative from the substance of the election by making outlandish allegations against the PDP and lobbying Civil Society Organisations and Electoral Observers to validate their illegality.”
The party added that even if the Osun governorship election is conducted over and over again, the PDP will still win as the people of the state had chosen the PDP and its candidate, Adeleke, insisting that the September 22, 2018 election, under the laws, is conclusive and our candidate must be declared winner.

The APC responded yesterday, accusing the PDP of engaging in vote-buying in the election.
The party also alleged that PDP has vowed to deploy all “means, schemes, shenanigans in all ramifications and magnitude to rig all coming elections, starting from the Osun State governorship election.’’

In a statement issued yesterday by the Acting National Secretary, Mr. Yekini Nabene, the party said that it had video evidences to confirm the vote-buying allegations.
The party claimed that it is now clear that the vote-buying template allegedly introduced by PDP and deployed in the Osun election, is an urgent threat to democracy and current efforts to ensure the sanctity of elections.

APC said, “While the PDP and its paid proxies were accusing other political parties of irregularities during Saturday’s inconclusive elections, the party was busy perpetrating its vote-buying scheme as exposed in several leaked videos showing PDP agents buying votes for its candidate, Senator Ademola Adeleke particularly in Ede local council of Osun State.
“The PDP’s public rigging method, particularly vote-buying and dissemination of diversionary fake news must be checked particularly as we go into the INEC-ordered Osun governorship rerun. We also call on the electorate, civil society organisations and relevant stakeholders to speak out and resist the PDP’s retrogressive plans which threaten our democracy.”

APC further accused the PDP of attempting to misinform the public on the rationale for declaring the Osun governorship election inconclusive.
It said PDP should be reminded that in 2015, when the late Abubakar Audu of Kogi State was leading by 240,867 votes to PDP 199,514 votes, the margin of 41,353 favoured APC but it was declared inconclusive, adding that INEC ordered a rerun because 49,953 cancelled votes were higher than the 41,353 despite the fact that APC was leading with a wide margin.

It argued that at the time PDP did not protest but rather prepared and waited for the rerun date.
APC said, “The PDP cannot be supportive of decisions only when it seemingly favours them. There are electoral precedents, guidelines and laws which are binding on all.
“Finally, we reiterate our confidence that the Osun electorate will resist the PDP’s deployment to take over the state by force. The people’s will; the people’s vote is supreme. It must be respected and defended. That is democratic, progressive and the right thing,” the party said.