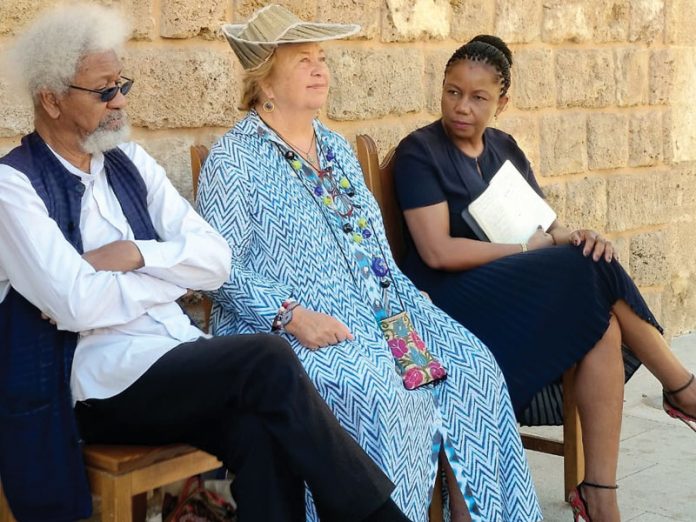 DRAMA
One week was all the production team had to stage a dramatic reading of the classic drama, Death and the King’s Horseman, written by the Nobel Laureate, Prof. Wole Soyinka. Actually, it was only three sessions of reading rehearsals with the privilege of performing it before the playwright and his wife; one of the leading sponsors of Study Abroad in Lebanon (SAIL), Habib Jaafar and wife, and Nigeria’s Ambassador to Lebanon, Goni Modu Zanna Bura, among other distinguished guests.

The audience had previously gathered that morning for the Anis Makdisi Memorial Lecture (AMPL) at the American University of Beirut (AUB) in Lebanon, which had Soyinka as its speaker. Hence, the play was the dessert for the main course – the lecture with the theme, “Oh-oh, Fables Sweeter Than Facts: History, Culture and Revisionism” – and it was well-decorated with a cosmopolitan cast mostly drawn from the African Club, the English Department with support from the Eliane Saadeh and the AUB Advancement Office as well as the Anis Makdisi Programme in Literature.
“Oh! NEPA!” Soyinka exclaimed as the hall was thrown into partial darkness, no thanks to a power outage. The Nigerians and Lebanese-Nigerians grasped the humour in those few words as he resumed the hour-long lecture that culminated into the reading of his play.

Produced by the AUB Theatre Initiative, the audible reading put the aged sound system to shame as the actors made conscious effort to project their voices for clarity, emphasis and in some cases, empathy. Death and the King’s Horseman is all-too familiar for some Nigerian guests in the audience; then ditching the critical lens was almost impossible. A true colonial African story set in a fictitious Yoruba district, Death and the King’s Horseman is a play that tests every cast and crew member heavily. For the reading, more responsibility hangs on the dramaturg, Sahar Assaf whose territory includes diction and meaningful interpretation of lines. Of course, no one expects the Lebanese Iyaloja (Nisreen Sinjab) to speak Yoruba but the level-headedness with which she interpreted her role as a diplomatic interventionist in the ruling class, without costumes and props was indeed astonishing.

The Olunde character was assumed by the Ghanaian student, Jonas Moorkaar. Not only does his temperament fit the role, his heavily-accented delivery conveyed the truth about the crossroad for many Africans who are confronted by situations that exert or question their cultural loyalty. In the play, Olunde, a medical student in the United Kingdom returns to Nigeria to perform the funeral rites of his father, Elesin Oba who is required to commit suicide in fulfilment of the rites of passage for the late King. Olunde embodies the tragedy of the drama and the director, Robert Myers didn’t miss the point in the selected scenes.

What appeared to be type casting was the selection of Doyle Avant and Nadia Hassan as Simon and Jane Pilkings. Both of them attempted the native English speaker’s intonation, mirroring with accuracy the condescending look that the colonisers in the play cast on some aspects of the culture of the colonised. A Scottish teacher of Arabic, Rosie confessed to this reporter after the reading, “I am embarrassed at the way the colonisers treated the Africans.”
But the lessons taught in the play transcend the colonial context. To be sure, no fewer than 10 Nigerians in the audience were part of the 12-day Study Abroad in Lebanon (SAIL) programme, that teaches World History Through the Eyes of Lebanon, with emphasis on Lebanese-Nigerian Cultural Relations. Right from being introduced to the Lebanese cuisine and the Christian-Muslim peaceful co-existence in Lebanon, the visiting team had been taught the same underlying message of Soyinka’s play which is: Respect other people’s culture even if you don’t share them. For most of the programme’s participants, that excludes eating pickle-laced sandwiches or Lebanese Za’atar pizza.

The Pilkings’ characterisation also drummed up the reality of good casting. Many directors in Nigeria often settle for any available fair-skinned actor to play the “British’’ role and that cultural essence is often lost on the bewildered audience. A most unforgettable actor was Raffi Feghali, who obviously understood his role as a “Praise Singer”. A praise singer is essentially a hype man, and Feghali conveyed this through the cadence of his delivery and hyperactive stance on stage.

What constitute the Achilles’ heel of the reading is perhaps the African cast. Most of them had lived all their lives outside the African continent and so, they are as naïve and oblivious to African mannerisms as their foreign counterparts. Perhaps, the director or dramaturg took it for granted that they might need even more polishing than others to achieve some measure of verisimilitude. It was quite evident in the way Sergeant Amusa (Mustaf Abdullahi) struggled with some of the lines and the entire comic relief imbued in his lines was blown away. He was meant to be an overzealous policeman, excited to have a few moments of authority. Certainly, three sessions of reading couldn’t have been enough to groom him for the role, so that’s pardonable.

The director got one of his bull’s eye moments in his casting of Rosine Mukabagorora as the bride. The voluptuous characterisation matches the popular African specifics: full bosom, wide hips and well-rounded derrière. The tiara may have delineated her from other women but again, it constitutes a western interpretation of the character as there are no indications that traditional Yoruba bride of the period wore tiara.

That said, it was refreshing to witness the Beirut community’s appreciation of African literature. Some years ago, Notre Dame University had organised a lecture in honour of Chinua Achebe’s literary legacy and Soyinka was the first Nobel Laureate to have visited the institution to deliver the lecture. That was the genesis of the SAIL programme in Notre Dame University, Louaize with Prof. Edward Alam and Dr. Joseph Rahme brainstorming and building a formidable team of faculty for this project in collaboration with Wole Soyinka Foundation, Cedars Institute and Cedar Trust Group.