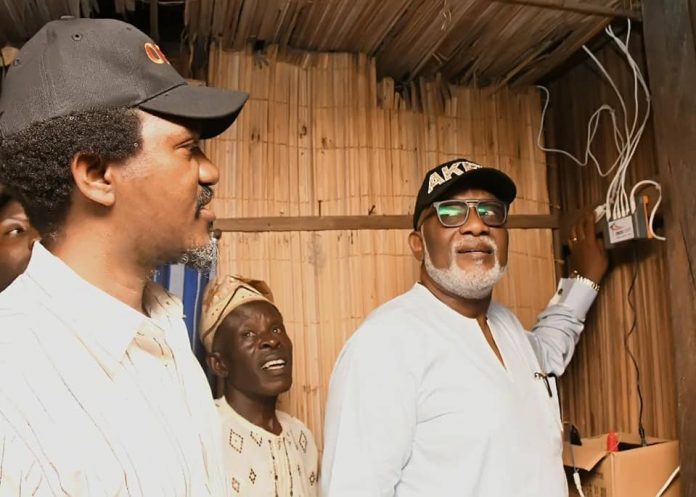 After 11 years of living in darkness, some coastal communities in Ondo State finally get electricity, courtesy of the state government, reports Kayode Fasua

The story was once told of how coastal communities in the south senatorial district of Ondo State were marooned and disconnected from civilisation, owing to inaccessibility by road. To connect with the Nigerians on the other side of the divide, you would have to sail in a speedboat or a languid, manual boat, depending on your purchasing power.

These oil-rich communities, comprising mainly Ilaje and Ijaw ethnic nationalities, recently also complained of virulent surges from the Atlantic Ocean, and have had to brave many odds, as they eke out a living by fishing. Largely, the people reside in water-logged enclaves. To these folks, as pundits are wont to joke, mosquito bite is no longer a source of worry, but a way of life.

Once upon a time, any illustrious son of this coastal area that bought a car must park it at the Igbokoda Waterfront, and then take a picture of the luxury as he journeyed by boat to show his household in the creeks, who, upon sighting the image of the car, literarily erupt in wild jubilation, giving vent to merriment and pouring of libation.

But that setback was reversed about 10 years ago, when the administration of Governor Olusegun Agagu inaugurated a link-bridge road across the waters, to re-integrate most of the marooned coastal towns.

However, not many seemed to be aware that for 11 years too, most of the coastal communities in Ondo State had been without electricity, languishing in dark nights and slothful days.

Reports indicated that for inexplicable reasons, they were cut off from the national grid and their cries for reintegration had fallen on deaf ears.

But last week, the administration of Governor Rotimi Akeredolu (SAN) reversed the age-long deprivation as the state government restored power to communities in the area, in an ongoing move to obliterate outage from communities in Ikale, Ilaje and Ese-Odo local council areas.

Declaring open the power restoration programme, which was executed by R. R. Reynolds-one of the state’s power service providers, the governor assured other communities in the area that he would not relent until power is fully restored in the entire southern senatorial district.

He explained that the solar power systems were immediate palliatives for the most deprived parts of the district, and were being deployed as a start-off point. He assured the people that the company handling the project would soon put a major hybrid reciprocating gas engine in Igbokoda.

Akeredolu also promised the people that the power from the national grid would eventually reach many communities in the area, as the Niger Delta Power Company (NDPC) would be carrying out major rehabilitation works on the power distribution infrastructure.

“The solar systems that have been given to these two communities will become backups to our major mini-grids, and the power from the national level, as soon as they are ready,” he assured.

The governor explained further that a mini-grid power plant would be sited for the use of the Ondo State University of Science and Technology (OSUSTECH), Okitipupa.

Akeredolu, who had two major town-hall meetings with the people of Ilaje, Eseodo, Irele and Okitipupa, urged them to protect the facilities from vandals.

He expressed deep concern over the long disconnection of an entire senatorial district from the national grid.

“How can I be happy when a whole senatorial district of my state is in darkness?

“The South is our industrial base and we have been moving from one place to another, wooing investors.

“We’re determined to explore our bitumen and resuscitate all our moribund industries and therefore, we must have electricity,” he protested.

Enthused, the community’s monarch, the Olu of Igbobini in Eseodo Local Government, Oba Raphael Oyedele, thanked the governor for the intervention. He described Akeredolu as God-sent, following years of being in total darkness.

Regaling in the joy of the occasion, Oba Oyedele said, “Akeredolu, you have brought back God to Igbobini; because, a place without light does not have God. We thank you.”

Also, the traditional ruler of Aboto community in Ilaje Local Government, the Alaboto-elect, Ofoaye Oyetayo, applauded the gesture of the governor for resolving the 11-year-old blackout problem in his community.

He said: “We have been in darkness for 11 years. We are happy about your gesture, Mr. Governor. You surprised us with this good thing. It’s been 11 years we had power supply last in Aboto and the rest of Ilaje communities.

“When the company was counting houses and measuring our community, we thought it was a gimmick. Sir, God will always be with you for making this a reality.

Assuring the governor of protection of all the power facilities being installed, the Oba-elect also promised that the people would support the administration in the implementation of all its programmes.

Reacting, one of the residents of Aboto, Mrs. Jumoke Ikuomola, appreciated the governor for lightening the community, saying they had been living in darkness for several years.

She noted that the electric power being provided would have great impact on the academic performance of their children, as they would now be able to study at night.

Another resident, Mrs. Omolayo Jose, who confirmed that “the light is very bright”, called on the governor to establish a secondary school in the community, saying, “Our children travel long distance to attend secondary school”.

She said: “We started using the solar power three days ago. It is very bright. We thank our governor; but I want to appeal to him to establish a secondary school here in Aboto so that our children won’t need to go a long distance to attend secondary school.”

In his remarks, the Special Adviser to the Governor on Public Utilities, Mr. Tunji Light Ariyomo, an engineer, said the Igbobini and Aboto electricity activation was only a tip of the iceberg, as the Akeredolu administration has series of power projects lined up for most rural communities in Ondo State

Speaking with THISDAY, Ariyomo said: “With mini-grids, we shall be providing private power for places like Igbokoda, Igbekebo, Ode Omi, Iju Odo, Ilutitun, Kiribo, Igbootu, Ala Elefosan, Ugbonla, Aboto, Oda, Aponmu, Auga, Oke Igbagbo, Ese by Ogbagi Akoko, Bamikemo in Ile Oluji, and several other places, with the communities themselves owning as much as five percent of the equity in the power plants.”

He further explained that Governor Akeredolu had declared emergency on blackout in the Ondo southern district, through a two-prong approach that includes direct intervention by the state government, as well as grid-tied intervention through federal agencies such as NDPC, Transmission Company of Nigeria (TCN) and the Niger Delta Development Commission (NDDC).

He added that the state government is currently covering over 60 per cent of houses in Igbobini with stand-alone solar systems under the SHoPU scheme.

“Apart from Igbobini, the Aketi Power Team is also currently working in Aboto in Ilaje Local Government. Over 80 percent of the houses in Aboto now have light.

“We are starting Ebute-Ipare’s this week, and not too long from now, Igbokoda will be having a major hybrid reciprocating gas engine, with a solar-farm backup, while a dedicated Independent Power Project (IPP) is coming to OSUSTEC to power the university and certain parts of Okitipupa,” Ariyomo said.

The adviser, however, explained that the stand-alone solar system is different from the mini-grid, saying that the former was being deployed as an immediate palliative in those communities as explained by the governor at the town-hall meeting.

Meanwhile, the federal government has awarded contracts for the reconstruction of damaged power distribution infrastructure in the southern region of the state, and the project, the authorities assured, would commence this week.

This was revealed by the Executive Director, Engineering and Technical services of the Niger Delta Power Holding Company (NDPHC), Mr. Ifeoluwa Oyedele, at the venue of the town-hall meeting in Aboto.

Oyedele told the gathering that the type of intervention that had been approved for the southern district of Ondo State was unprecedented in the history of the country.

He said: “I am pleased to announce that contracts have been awarded not only to restore power to the southern senatorial district, but also to upgrade it.

“In Okitipupa area, for instance, it’s tragic that OSUSTECH which was established 11 years ago has not had one unit of power supply since inception. Therefore, a child born in Okitipupa 10 years ago or in Ilaje 15 years ago will not have seen public power supply in his or her life. But today, we are moving to end this tragic story. “

Governor Akeredolu expressed appreciation to Oyedele “for his doggedness in attracting such an epochal project to my state.”

The governor also extended his appreciation to President Muhammadu Buhari and Vice President Yemi Osinbajo, “for responding to the request of the state government and for prioritising the demand of the people of the South district of Ondo State.”