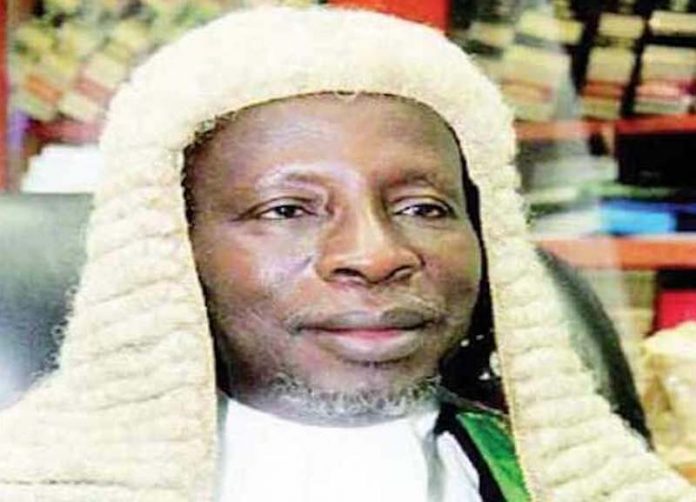 Abdul-Kafarati, in addition, urged the judges to be guided in their decisions by the rule of law and the constitution, so as to remain the hope of all citizens.

The Chief Judge gave the charge yesterday in Abuja, at a special court session to mark the commencement of the 2018/2019 Legal Year of the Federal High Court.

Abdul-Kafarati noted that the tasks before the judges are daunting, taking into consideration the forthcoming 2019 general elections.

He disclosed that in his bid to ensure the court is not used by politicians to scuttle the political process and disrupt the peace of the country, he had directed vacation judges not to grant exparte order in any political case brought before their courts.

“In an attempt to forestall any hiccups and blame on the court by the political gladiators, I have during this vacation issued a circular that interim orders exparte shall not be granted in political case brought before the court.

“I believe that controversies, especially in political cases can be reduced when the court takes a decision after hearing all the parties in the case.

“It is also extremely important that all political cases that may affect any of the parties, which are still pending in any of our courts be concluded without further waste of time to afford all candidates the opportunity to pursue their political ambitions. “Honourable Judges whom such cases are still pending must endeavour to conclude them before end of October 2018”, he said.

While appreciating the judges and staff of the Federal High Court for the dedication and hard work, he emphasised that the judges must be wary in their handling of all cases and “especially cases concerning political parties and the upcoming general elections.

He said the judges should use the court and the constitution to regulate the society for the good of the future generations and the society, adding that as Chief Judge of the Federal High Court, he would continue to give priority to their welfare.

While noting that the court will be starting the new legal year with about 191,766 cases from the previous legal year, he urged litigants to take advantage of the Alternative Dispute Resolution Centre soon to be opened in the Federal High Court. “It is my advice that the advantages of the centre be exploited by all to help us reduce the dockets of the courts and for quicker resolution of disputes devoid of the usual legal technicalities”, he added.

Minister of Justice and Attorney General of the Federation, Abubakar Malami, in acknowledging the constitutional mandate of the court, however, urged the court to take urgent steps to facilitate the speedy dispensation of justice, which according to him, will engender greater public respect and confidence.

The Minister who was represented by the Solicitor General of the Federation and Permanent Secretary of the Ministry of Justice, Dayo Apata, also suggested that the court in the discharge of its duties must always strike the appropriate balance between the personal rights of litigants and the overall good of society. “In this manner, the judiciary will play its role actively as an agent of social change and re-orientation without necessarily sacrificing its core mandate of protecting the rights of all individuals and institutions in an efficient and humane manner.

“Let me also appeal that judicial officers must equally ensure that the credibility of their offices and their sense of personal integrity remain unimpeachable at all times in order to promote greater confidence of the public in the judiciary.

On his part, President of the Nigerian Bar Association, Paul Usoro, while reiterating the faithfulness of lawyers in the temple of justice, commended the court for being brave and fearless when it matters most, adding that, “Your Lordship pronouncements in these cases, far more than the handiwork of the political class, has kept this country united and prevented strife, chaos and commotion in the different states of the federation”.

Earlier, the Chief Judge and other judicial officers of the Federal High Court had commenced the legal year with a religious service at the Holy Trinity Catholic Church, Maitama and the National Mosque, both in Abuja.