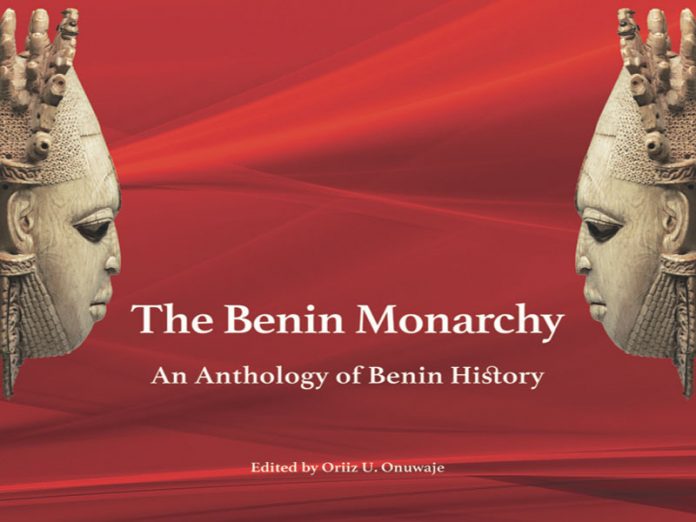 The first and permanent impression of this truly magnificent and imposing book, THE BENIN MONARCHY: An Anthology of Benin History, is that it is a very creatively-designed and laid-out book. This outstanding artistic quality of the book; right from its red cover and gold letterings, raises the expectations of the reader and, the inside pages do not disappoint in presentation and content.
The exquisite design and lay-out of the inside pages; an extension of the attractive cover, should come as no surprise, as this is the idea and work of Oriiz U. Onuwaje (who also edited the book); a well-trained and vastly experienced graphic artist with an impressive track record of international advertising as well as magazine and book design and production. Prior to this book Onuwaje had shown his hand and style with his upscale lifestyle magazine Masterpiece, that emphasised good taste and classy living. Appropriately, the artistic design of this book corresponds and does great justice to the Benin monarchy and people, who for centuries have been renowned world-wide for their bronze, ivory and wood artworks.

This book is very unique in many ways. It is published by Royal Warrant of Appointment to His Royal Majesty Oba Ewuare 11, Oba of Benin. In the Foreword, Omo N’Oba Ewuare 11, writes that, “As we present this anthology to the world, we are persuaded that the contribution of our people and recognition for our noble civilisation will go far beyond mere reminiscences of the many distinctions which we have become famous for.” Indeed, this book affirms the importance, historical relevance and authenticity of the numerous contributions and achievements of the eight-century-old Benin monarchy.

The preface is by the eminent Professor of History Obaro Ikime who has admirably continued to use the principles and purpose of African historiography (in conjunction with colleagues like Professor E. J. Alagoa) to correct the deliberate fake history as perceived and documented by the colonial officers. As such, he debunks the British claims about their so-called Benin Massacre. “The Benin Massacre was, for me, perpetuated by the so-called Punitive Expedition, not the killing of a few British officials who were violating the territory of an African ruler, in disobedience to the ruler’s message to the British not to visit Benin at that time. As usual, it was a case of might is right…” Ikime, at the beginning of his Preface, categorically states that, “This is a great book about a great people, a great kingdom and a one-time great empire, easily the largest empire ever established in the rain forest belt of West Africa.”
In his own remarks, the editor and designer of the book, Oriiz U. Onuwaje, informs that, “This compilation is presented to stimulate further research into Benin history, traditions, and culture and to ensure that these are fully documented for posterity.”

This book is really a big book; in fact a tome of 570-odd pages, a special one-of-its-kind book on such a fascinating dynasty in the history of monarchs’ world-wide. Its sub-title One of the World’s Most Ancient Royal Dynasties is definitely deserved.
Structurally, this Anthology features 27 contributing editors, 18 chapters, four sub-chapters and an epilogue. Its dimensions are 300mm x 360mm and, it weighs approximately seven kilogrammes!

The contributing editors are a parade showcasing mostly eminent Benin academicians and scholars; all of them professors and PhD holders, who display their historical and analytic examination and understanding of the various topics under review.
Paradoxically, this over-dependence on “straight” academicians and their rather turgid and predictable style of writing; Introduction, Background, the main body of the essay and then copious references, unfortunately makes the text in the book cumbersome, unnecessarily intimidating and not too reader-friendly for the average general-knowledge-seeker reader. Nonetheless, it remains a great and essential book though, for researchers, libraries and ultra-patient inquisitive readers!

The four parts of the book are Part 1,Benin: The Beginning and Growth of an African Civilisation; with Chapters 1- Benin Kingdom: The Growth of an African Civilisation; 2- The origin of Benin and its Monarchy; 3- The Interregnum and the Establishment of the Oranmiyan-Eweka Dynasty; 4- The Oranmiyan-Eweka Dynasty; 5- From Oba Oranmiyan to Oba Ewuare 11; 6- Great Benin: From Kingdom to Empire-Building, 1440-1897.

Part 2, The Obas and the Civilisation of Great Benin; with Chapters 7- The Administrative and Political Structure of Benin Kingdom, Origin, Significance and Uses of the Benin Chiefs’ Regalia; 8= The Military Organisation of Benin Kingdom; 9- Benin Traditional Religious Practices, The Origin of Worship at Holy Aruosa Cathedral; 10- Economy and Society in Pre-Colonial Benin Kingdom; 11- Benin Royal Art: Artistic and Hand-Crafted Artefacts; 12- The Guilds of Benin: Artefacts, Antiquities and Other Arts; 13- Heroines and Queen Mothers of Benin Kingdom, Okuku Nogboka: Head Dress Fit for Queens and Princesses, Usukporhu: Defending the Oba and his Harem.
Part 3, Invasion, Colonialisation and Resilience of the Benin Monarchy, with Chapters 14- Oba Ovonmramwen N’Ogbaisi The Last King of Independent Benin Kingdom; 15- Oba Eweka 11: The Resilience of the Monarchy; 16- Oba Akenzua 11: The Grandeur of Royalty; 17- Oba Erediauwa: The Philosopher King.

Part 4, The Making of an Oba, with Chapter 18- Oba Ewuare 11: The Philosopher and Diplomat King and, the Epilogue with Omo NÓba Ewuare 11: First 365 Days in View; Human Trafficking: Traditional and Diplomatic Fight Against Modern Slavery.

The major attraction of this book, is the prominent use of carefully chosen and placed photographs and visuals right from the beginning and, this display especially of “perfect” photographs of the finest Benin bronze, ivory and wood artworks through the centuries, ensures that this book can be read and fully appreciated visually at many levels!

This must be one of the richest pictorial assemblies of the vast and priceless collection of Benin arts and antiquities in and outside Benin, as well as a photographic album of the Benin monarchy from 1897 to 2017, ever published in book form.

The 70-odd full-page photographic images of bronze plaques, bronze, ivory and wood artworks of faces, animals and emblems, include the Benin art treasures looted with impunity by the British in 1897 and are now on “illegal” display in top museums in Britain, Europe and the U.S.A. As Oba Erediauwa informed, these bronze works were used, before the advent of photography, to document the remarkable achievements of Obas, and constituted a traditional historical library.

A look-through of these images is a thrilling awesome experience in art appreciation as well as an educational journey. Their inclusion is also a subtle oblique commentary and indictment on their rouge-looting.

The maps, charts, graphs and hundreds of photographs in particular, help consolidate the vivid visual history of the Benin monarchy and kingdom, this book sets out to portray. Black and white photographs by Green, Alonge, Fiofori, sourced from museums and palace archives as well as more recent colour photographs by Okiy and other Benin-based photographers; especially the many-page colour spreads of the lavish coronation of Ewuare 11 as the 40th Oba of the Benin Kingdom in October 2016 and his activities 365 days after, round up the book.

This book is fondly dubbed the Benin Red Book because the Benin monarchy is associated with red; which is their predominant colour and brand (ododo); hence the use of many red pages in its design as well. THE BENIN MONARCHY: An Anthology of Benin History, is a highly recommended must-have book for all lovers of culture and history world-wide.

––Tam Fiofori, a foremost Nigerian filmmaker, photojournalist and writer as well as the author of the seminal photography-and-text book A Benin Coronation: Oba Erediauwa and essays, Redeeming the Image of the Benin Monarchy and People [ and J. A. Green: Pioneer and Legend, writes from Lagos.

Schalke Players Attacked with Eggs by Own Fans after Relegation