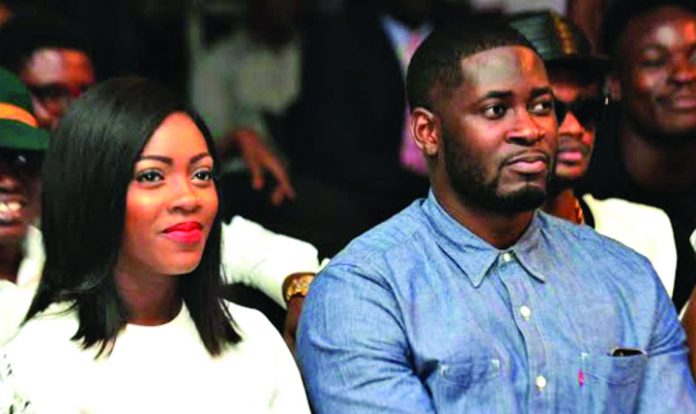 Tiwa Savage’s estranged husband, Tunji Balogun, better known as Teebillz, took everyone by surprise when, during the week, he broke his silence on the rumoured relationship between his ex and music star, Wizkid. His stand, hard to believe though, is eliciting a second thought. Omolabake Fasogbon reports

The widespread speculations on the amorous relationship between music stars, Tiwa Savage and Wizkid leaves no hope of petering out so soon, rather it continues to gather strength as each passing day new and interesting episodes unfolding.

Ever since the screen diva separated from her husband in 2016, tongues have not stopped wagging on her alleged enamoured dealings with 24 years old ‘Pakurumo’ crooner.

Although, the duo has on several occasions insisted that the kind of bond that existed between them was strictly platonic, and not what people thought of, die-hard fans still find it difficult to come to terms with this claim, especially as their closeness continues to wax stronger.

In a surprising move, Tiwa’s estranged husband, Teebillz, satisfied the curiosity of watchers when he responded to trolls on the issue on Instagram.

According to him, Wizkid, being his little brother would not disrespect him by engaging in such an act, adding that the mother of his child would not stoop to such show despite the feud between them.

He wrote: “Whether you like it or not, Ayo is my lil bro and he knows not to cross me on blood gang … we don’t play that shit on 400 blocks! That’s my lil Nigga and is Big Hommie Sauce kid aka Sinzu guaranteed me on the lil homie even though he’s my blood and Mr. Capable Banky W is my blood!

“…. I’m just saying this to the general public that tend to come at me on some disrespectful Shit!!!! For your information! Thank you Titi for respecting me! Your opinion on her and my lil bro Wizzy is bullshit! Don Jazzy! Jazzy! Will never allow that! I trusted you fam??????? He will never allow that!!!!.

“Tiwa gets mad at me on my own P but she will never put me down like that…and at the end of the day my hustle will match on with my responsibilities in my kid’s names !!! But 4real on Jamil#!!!!! Tiwa will never disrespect me like That!!! @tiwasavage @wizkidayo keep giving us that. Congratulations blood @wizkidayo on The NIKE thanks for putting Naija On the Map.”

Very much unlike him, Teebillz coming out of the blues to react against the gossiped affairs between the music icons still leaves many wondering on his stand as well as his decision to speak on the issue after a very long time.

More bothersome is the fact that the father of four, who once accused his wife of infidelity, dropped an exciting remark after he already took an excuse off the social media to undergo spiritual maintenance.

Teebillz in an earlier post wrote, “Temporary close for spiritual maintenance” and Tiwa in her naivety replied, “yeah cause you getting ready to come back even stronger”.

In less than 24 hours, the Afro-pop singer’s ex-manager betrayed his words only to resurface on Instagram to drop the rousing post.

It would be recalled that Tiwa’s intimacy with the self-acclaimed number one music star in Africa was first observed when both of them were on the set of  ‘Bad’ video from Tiwa’s second album, ‘Red’. Beyond this, subsequent acts between the pair are as good as calling them lovebirds.

Their collaboration in ‘Malo’ from Tiwa Savage’s EP, ‘Sugarcane’ did not suggest any clue of platonic involvement as they held close to each other tightly on stage.

The singers were also seen together at Ushbebe’s comedy show in March, not only that they attended the event together, they were sighted dancing together, days after news rent the air that Teebillz was filling for divorce.

The height of it all was when the pop-singer gave Tiwa a romantic cheek kiss at Gidifest. This got many to conclude over doubt that there was more to friendship and music business between them.

The super-talented Tiwa, who says she has grown a thick skin to all the speculations on her sexual involvement with her colleagues, most especially Wizkid reveals that she will forever be grateful to Wizkid for being a friend in need.

She once appreciated him in a post saying, “Forget music, you’ve been there for me even when you didn’t have to be. When I doubt myself, you call me ‘mama JamJam’ and put a smile on my face. My dear Ayo, mama JamJam loves you.”

The Pepsi brand ambassador has also been cool with her estranged husband despite the row between them. This is particularly obvious in her posts and comments.

Even in their present state, she did not fail to acknowledge Teebillz’s role in her career as she says she will forever be appreciative to a man who worked hard to give her image a face-lift.

The mother of one who is presently rocking her low cut hairstyle says she is happy in her natural looks and wants to remain like that.

Although Teebillz’s note may not be convincing enough for doubtful fans, it is expected that his position should calm the airwaves.