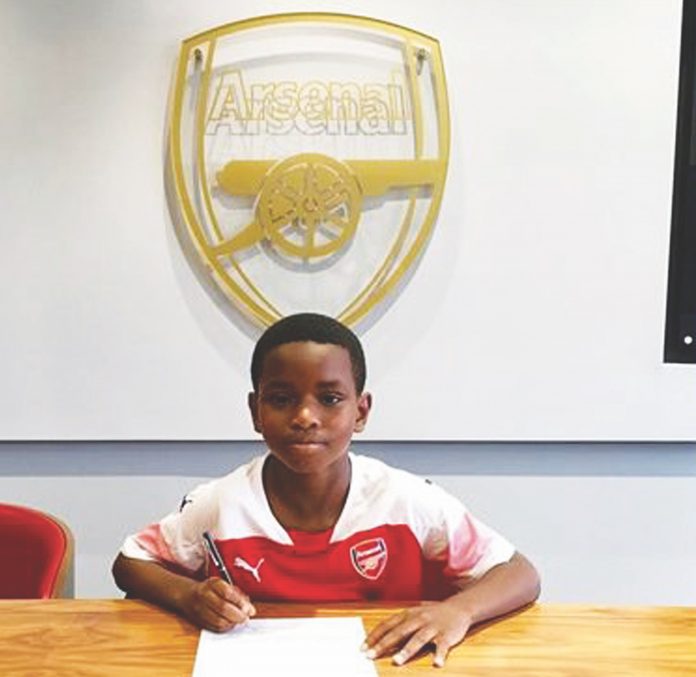 Aside from their free-flow style of football, what erstwhile Arsenal manager, Arsene Wenger and indeed Arsenal as a football club is noted for is given teenagers opportunity to show their talent and the list is endless and it therefore came as a little surprise when the North London club signed on nine-year-old Nigerian’s kid, Jayden Adetiba, after five-weeks trial. However, whether he would blossom to be a real Gunner is another question entirely

Arsenal might not have made it big during the summer transfer by bringing a in a high profile player, but the Gunners had a fair share of the market.

The Gunners how hit the air waves last week with the signing of nine-year-old Nigerian- Jayden Adetiba, after impressing the football club during a five-week trial.

Adetiba has been living in South Africa and has also spent time living in the UK. He has been a fan of the team his whole life. He spoke about how he felt about the news.

“I thank God and my parents for this. I am very happy. I train three times a week at the academy,” he told The Sun.

Adetiba has been playing for the SuperSport United Soccer School in Cape Town. Footballing talent seems to run in the family, with his older brother having spent three years at Blackburn Rovers’ Academy.

For Adetiba, it’s a dream come true. “The amazing thing is, I have always been an Arsenal fan and I will work hard every day to make the first team.”

According to his former coach at the SuperSport United Soccer School in Cape Town, Brent Sanders, he said it was clear from day one that Adetiba had “something special”.

“Jayden worked with me for two years from the age of seven, and from his first practice session I could see that he was an exceptional talent that stood out in the group,” Sanders said.

“You could see he had something special, but what was also so impressive was the way he progressed almost with every training session. He had a real hunger to learn and was able to put that into practice quickly.”

Sanders said that above the youngster’s obvious ability, it was also his attitude that set him apart.

“His mentality is different, the way he goes about his training. His work ethic is a lot better than other kids his age, and I think that comes down to the way he was brought up. His family is very supportive of him and that allows Jayden to express himself. He never stops the intensity of his training, you can see how much he wants it.”

Adetiba has signed for Arsenal, but Sanders revealed that he first joined Blackburn Rovers earlier this year.

“We went to the FDS [Futebol de Salao] World Cup in Johannesburg last year, and Jayden was scouted there by Blackburn Rovers. We won the tournament and he was given a trial by Blackburn at the beginning of this year, after which he was offered a place in their academy.

“I stand corrected but I think in his first match for Rovers he scored four goals and won Man of the Match. After just a month with Blackburn, he was offered a five-week trial with Arsenal and has now been offered a contract.”

Another stand-out feature of the youngster is his maturity, Sanders said.

“Kids peak at different times, but with his maturity level, if you saw him you would think he is a 10- or 11 years old, and he was like that from the age of seven or eight. He has this will to learn and to always try to become a better player.”

Sanders believes he has other youngsters in his academy who could follow a similar path as Adetiba, but they do not have the benefit of a United Kingdom passport to help get them into an academy set-up overseas at an early age.

Sanders nevertheless believes more young players of Adetiba’s quality will be discovered if they enter academies at an earlier age.

“In South Africa there needs to be more attention in the area of grassroots football. Most academies start at the age of 13 and by that age too many bad footballing habits have been instilled in the kids. In this country we are starting too late.

“South African kids are naturally talented, as talented as their peers overseas, but they are not being taught the basic skills at an early age, and therefore they fall behind.

“But I think academies like ours can make a difference. Look at Jayden, and he is not the only one who can make it out of our group.”

It however remains to be seen how well Jayden would progress to become a star.