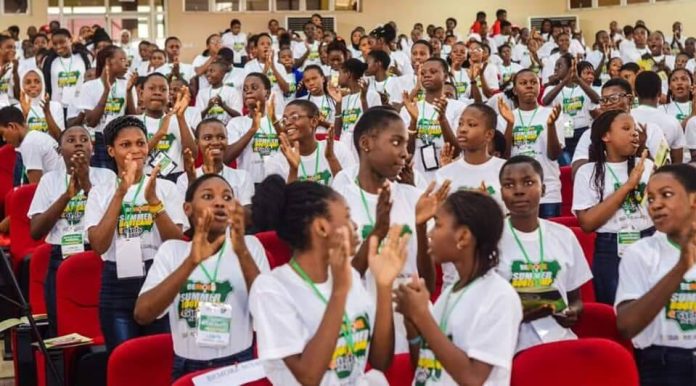 The yearly eight weeks long vacation for secondary schools in Nigeria is a period that most teenage students look forward to, as it is a time when they can experience some level of freedom from the usual 8am to 4pm school schedule. During this period, the level of monitoring over the activities of these students is always limited to whatever their parents can do.

Thus, several summer coaching classes are organised by various centres, because limited monitoring of these teenagers during the holiday period often results in engagement in vices and activities that are inimical to their progress. While many girls may become victims of rape and unwanted pregnancies, boys may be exposed to vices like thuggery and drug addiction.

Summer Boot Camp to the Rescue

It was to prevent students from becoming victims of the above vices that the wife of the Ondo State governor, Mrs. Betty Anyanwu- Akeredolu, through her non-governmental organisation, BEMORE Empowered Foundation, organised a training camp for 400 girls selected from across the secondary schools in the Sunshine State to attend the summer boot camp.

For the 400 school girls, the gains of the camping period would remain evergreen in their memories. The girls, who were camped at the Elizade University, Ilara Mokin students’ hostels, participated in the second edition of the BEMORE Summer Bootcamp for Girls Naija. They were trained within the facilities of Ondo State Public Service Training Institute (PSTI), also at Ilaramokin, Ifedore Local Government Area.

The camp is the brainchild of BEMORE Empowered Foundation, a non-governmental organisation founded by Mrs Akeredolu, who is also the founder of Breast Cancer Association of Nigeria (BRECAN).

For the period of the camping, the participants were trained in different life changing and empowerment skills, including solar power panels making techniques, Information and Communication Technology (ICT) skills, graphic and fine arts, and making of household needs and toiletries. Apart from the empowerment skill training, the girls were also tutored in personal care and development lifestyles and physical participants.

One unique aspect of the project was the distribution of laptops to the participants and their link up with mentors that will be monitoring their activities, to build on the foundation established during the camping period.

According an official of Betty Akeredolu Foundation, Mr. Austin Otabor, each of the participants would be attached to a mentor, who would monitor their activities for three years.

The closing ceremony of the programme was held at the auditorium of the Federal University of Technology, Akure Akure (FUTA). It was at the closing ceremony attended by several stakeholders including traditional rulers, the academia, entrepreneurs and parents that some of the girls displayed some of the skills acquired during the period of camping.

Speaking at the closing ceremony, Akeredolu, who presented the laptop computers and other prizes to participants, expressed hope that the girls will contribute effectively to the actualisation of a better Nigeria.

She said, “The Bootcamp has succeeded in building the next generation of complete leaders who are technologically proficient, health aware and highly skilled as entrepreneurs.”

Noting that the young girls are all set to defy and leapfrog all obstacles in ensuring that the Nigeria flag stands tall in G20 summits, she added, “I must warn you that there will be challenging times, but you should know that this camp has equipped you with all that you need to overcome them all. You are the twinkle little stars we hope will navigate our voyage, you are indeed the hope of many generations that has lost hope. To rise up to the task ahead, you must put all you have learnt here to practice, mentor many more girl-children and build a formidable network of change agents.”

While thanking all those who supported the initiative and made it a success, Akeredolu particularly acknowledged OSOPADEC, the BAAF team, Ashdam, Seedev and Shoprite, among others for being the giants upon whose shoulders the girls are standing to see further in order to create lasting development for Nigeria and the world at large.

An Example for Ekiti

The chairman of the occasion and wife of the governor-elect for Ekiti State, Mrs. Bisi Fayemi, in her remarks, lauded Akeredolu for coming up with the initiative, adding that Ekiti State Government would take a cue from the initiative to the benefit of its own people.

While also congratulating the girls for been among the privileged few who had the opportunity of being exposed to technology at an early age, Fayemi charged them to make the best use of the privilege and become great future leaders.

In his goodwill message, the Special Guest of Honour and Vice Chancellor of FUTA, Professor Joseph Adeola Fuwape, who was represented by Deputy Vice Chancellor, Development, Professor Philip Oguntade, likened the activities of Akeredolu in mentoring the girls to the Biblical sower. He said with the foundation, Akeredolu had sowed infertile land that would germinate and bear good fruits, adding that she was a pathfinder, who is determined to make ways for the new generation.

To this end, he said FUTA was willing to develop what was already deposited in the ladies. He further extended FUTA’s hand of fellowship by offering admission to the girls for their degree and post graduate programmes. He also promised that the institution is willing to partner the office of the wife of the governor in her future programmes.

In her remarks, Mrs. Toyin Adegbenro, the wife of the Ondo State Commissioner for Health, Dr Wahab Adegbenro, commended Akeredolu for the initiative. She added that the impact of the programme would be noticed more by the time the seeds being planted started to produce fruits.

“In 10 years’ time, I see entrepreneurs. I see girls that will change the future of Nigeria technologically,” she added.

Adegbenro expressed the hope that by the time the girls get back to their schools and share the knowledge gained with their friends, Ondo State would in the nearest future become a technology hub and thereby become an envy of other states.

While urging individuals and corporate organisations to support efforts of the organisers to ensure that more girls participate in future programme, Adegbenro said the camp had succeeded in bringing out potentials in the girls.

Speaking at the occasion, the Royal Father of the day and the Olubaka of Oka Akoko, Oba Adebori Adeleye, described the programme as a bold step towards a nation building.

The royal father stated, “It is a known fact that when a girl child is given an adequate education or training towards self-reliance, it is a right step towards building a strong and progressive nation. The event of the Summer Bootcamp is certainly a sure way to realising the Ondo State project, which is to make the state first in Nigeria.

“The timing of this programme is laudable, as it comes at a time when the youths of this country, who are the leaders of tomorrow are becoming extremely restless and speedily heading to a very dangerous tragedy.

“A good number of our youths now embrace with hard drugs and deadly drinks that they take to boost their energy or make them to be extremely bold, daring such that make then to be fearless. These drugs prod them to commit crimes wantonly and also to end up destroying themselves.”

The monarch expressed delight at the theme of the training, which is on Solar Technology and ICT, describing them as two key areas for development. He said that recent researches were pointing to the direction of energy from solar sources.

The monarch said, “I see this Summer Bootcamp as discreetly exposing our girls to a billion dollar industry which in the nearest future will be the order of the day.”

Oba Adeleye said the ICT aspect of the training was very apt considering the fact that it is taken over many aspects of productive activities. He said it is a known fact that Computer Based Test (CBT) has taken over from the former paper to pencil examination, being used before the new system.

“I say congratulations to you girls for being privileged to be part of rare opportunity. You must be ready to take risks in life and learn new things. You need not rely on stereotypes, if you must make a breakthrough”, the monarch said

Speaking on behalf of the 2018 BEMORE Bootcamp beneficiaries, 14-year-old JSS3 student of Greater Tomorrow International College, Arigidi Akoko, Busola Asoota, said the experience gathered would for ever remain in his memory.

“We learnt about solar power technology, ICT, handcraft, dancing and interacted freely with one another. Our Mummy told us that discrimination is not ours. She told us to stand tall and that we are not inferior to any sex and should be bold to achieve our goals in life. We say a big thank you to our Mummy, our mentors and sponsors of this programme,” she said.

The Amazon from Ikorodu @ 70