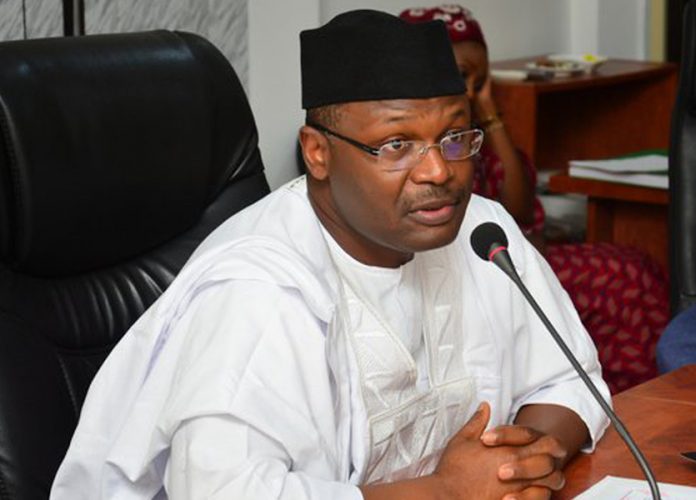 •We’ll enforce this starting with Osun governorship poll
•Meets 91 political parties
By Adedayo Akinwale in Abuja
The Independent National Electoral Commission (INEC), has vowed to make a statement with the forthcoming governorship election in Osun State scheduled for September 22, 2018, by arresting and prosecuting politicians inducing voters with money.
The Chairman of INEC, Prof. Mahmood Yakubu gave the hint yesterday in Abuja during a quarterly consultative meeting with the 91 political parties, where he urged the parties to conduct credible party primaries, as they are the cornerstone of democracy.
He noted that the political parties have just one month to conduct their primaries, advising them to conduct credible party primaries, as well as resolve all issues arising from the conduct of the primaries.
The chairman urged the political parties to adhere strictly to the timetable and schedule of activities of the 2019 general elections, noting that only 60 out of the 91 political parties have invited INEC to monitor their party primaries.
On vote buying, Yakubu stated: “We are witnessing an ugly trend of vote buying in recent elections in the country. This is giving our democracy a bad name.
“There is difference between democracy, – government of the people made by the people and for the people – and plutocracy, which is government by the rich.
“We are going to make a big statement with the Osun governorship election by arresting and prosecuting vote buyers. We can’t carry this ugly trend to2019 elections.”
The INEC chairman noted that the commission would only recognize notices emanating from the National Executive Committee (NEC) of political parties, as state branches cannot submit names of candidates, venue, as well as, date of primaries to INEC.
He stressed: “Primaries should be resolved without litigations. We are still battling with litigations from party primaries conducted in 2014. We have been dragged to court 680 times over party primaries.
“Political parties are key to our democracy. Some parties change names of candidates who genuinely emerged from party primaries, while some submit names of candidates without conducting primaries.
“Notification should not come from branches. Parties must avoid incessant changes to party primaries and try to eliminate rancor. We incure cost in the process of monitoring party primaries and we don’t have all the resources in the world to monitor party primaries.”
He further explained that even though INEC has no power under the law to reject the names of candidates submitted by political parties, “but, this time around, we will name and shame political parties that fail to conduct credible primaries; so we should do the right thing for our democracy.”