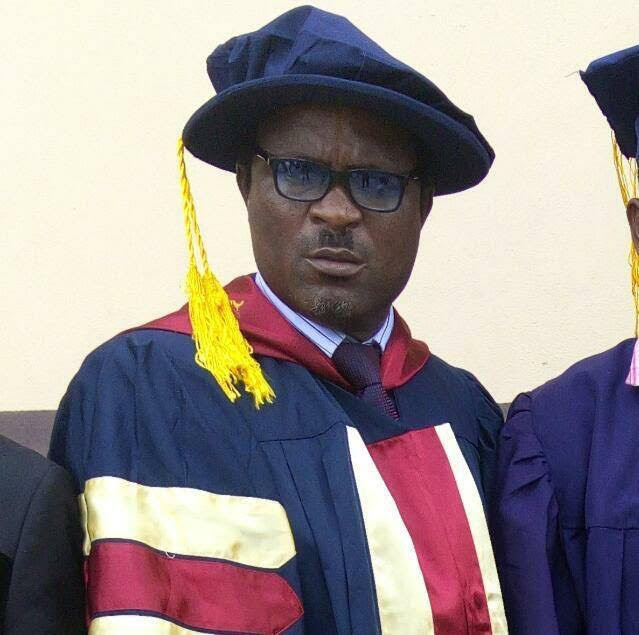 Deputy Provost of the Nigerian Institute of Journalism, Dr. Jide Johnson, in this interview with Ayodeji Ake, speaks on a number of societal problems, including the issue of substance abuse, especially among the youth, the inclusion of people living with disability in the school system, and the lackadaisical attitude of students’ toward learning. Excerpts:

How long has the inclusive mechanism for people living with disability existed at the Nigerian Institute of Journalism?

I cannot really talk about when, but since my assumption in this institution, that is far back as 2004, it has existed. This is because we believe in an all exclusive education that gives opportunity to every student regardless of their status, or regardless of them having one physical challenge or the other. We are here to allow and to provide opportunities for everyone to fulfill his or her dream because the right to education is a fundamental one that should not be denied anybody based on one form of disability or the other. So, we run an inclusive institution that gives opportunity to every student. I am sure virtually every institution in Nigeria does so too. I remember while I was still in UNILAG, we had guys that were visually impaired or have one form of disability or the other, but they were part and parcel of the educational program in UNILAG then.

There is an increasing consumption of drugs among the youth. How would you rate its effect on the lives of youths?

I think that the challenge every older generation have with the upcoming generation is that they see the latter as not being serious, rebellious, anti-establishment, and always quick to challenge the status quo, but they forget that every generation has its own peculiar problem. You talk about students now not being interested in education; I want to disagree with you in that. We have seen students that have left the shores of Nigeria even in this generation. We have loads of Nigerians traveling abroad to Ghana, Republic of Benin, United States of America, England, Australia, Cyprus, India and even Scandinavian countries like Norway, Sweden, Finland and Denmark. If you do your check in terms of educational tourism, the highest we have ever witnessed happened during this generation.

So, how would you convince me that this generation is not interested in education with those facts that I have provided for you? However, what way have we locally modified our curriculum to suit the needs of this present generation and to meet the challenges of training students to cope with the challenges of the 21st century and beyond? What is the state of our curriculum? Now that we are in a digital age, how digitalised is our educational system? How many schools are teaching with smart boards? We want students to read hard copies when they are digitally involved. Every society much change to meet the needs of its people.

While I was going to primary school we were using slate; from primary 1 to 2, we were using slat, but after that, we graduated to using exercise books. You know what children are using now? Ipads and the rest of it. Now, compare an average youth in Nigeria to an average youth in Britain that has unlimited access to internet, iPad, and information through use of Google and other forms of educational site like Kindle for children. Compare that with Nigerians that does not even have access to the internet. So, for us to solve the problem, we need to democratise the digital space so that people will have access to it. Until we do that, we are just wasting our time.

Say, if the students are not interested in learning, rather, are into drugs or other things, I think there are social institutions that are responsible for the training of the children; the family, community, religious institution, schools, and the media. They all worked while we were growing up, but you know the order has been restructured now.

So the question now is, what role do parents play in the training of their children? I have a 16-year-old son and I taught him from age 10 to never take a drink that is not opened in his presence. I also told him that when he goes to a particular place and he opens his drink before stepping out, he is not to take the drink once he returns. This is because my father used to tell me not to look for trouble I cannot solve by myself and to be careful of all my actions because every action has it own consequence. So, the blame for kids having problems with drugs is as a result of failure of the family, institutions, church and community. While we were growing up, if my friend’s parents see me not going to school, you know what they will do to me? They will cane me and send me home. We have lost those community values. Then every child belonged to the community and is not owned by a parent alone, so the community has a role to play in the upbringing of a child. But those value systems have collapsed, as virtually every parent now does 5am to 7pm or 5am to 9pm shift. The role of parenting has been taken over by the need to survive.

Although the society has battled the issue of drug consumption, it seems to be on the increase of late. What is your take on that?

A student of mine, Daniel Fayemi, over six years ago, wrote an article in Encomium magazine, on drug addiction and the youth. I have listened to different critics condemning Olamide’s song ‘Science Student’ and I tend to disagree with them because the essence of pop culture is to draw your attention to existing culture that needs societal intervention, to talk about the reality of what goes on that people are making pretensions about. If you read Fayemi’s article as far back as 2012 or there about, you will be shocked at the reality.

I know of a school that banned the consumption of instant noodle on campus because the students were cooking it with Indian hemp. They didn’t come out to let anybody know why they banished the noodles, they were pretentious about it. We live in a society that is pretentious. I tell you this, my son can tell you all the different mix of these drugs, but how many parent do have one on one relationship with their children that they can afford to tell them? My wife bought something that she wanted to take to the hospital for a procedure and my son saw it and told me about it. He said it was same thing students of some Christian universities where they do drug test upon resumption take to flush all the drugs in their system, use prior to resumption. My son is a SSS3 student.

I am throwing it as a challenge to any parent reading this, how many do have that intervention? When my son told me he wanted to go into music and video production, to become a producer, I told him the outcome of the lifestyle. I took him out one night to a club. They didn’t want to allow him in, but I told them that it was a learning process. So, it’s very important for us to let our children know the implication of any lifestyle they choose. Again, I challenge every parent that is reading this to become role models to their children, give them the opportunity to come to you. If you are talking about drugs purely for our generation it was alcohol, you know alcoholism is a dangerous thing too, so the reality of the matter is very simple, let every parent take responsibility for their child’s upbringing. We should not be pretentious about it because these children watch movies and musical videos.

What is your take on the disparity between the HND certificate and the university degree?

Another student, Segi Lola, I think went to Michigan School of Film for her master’s degree. People have travelled abroad with HND from our institution and do you know the interesting thing? Over there, they normally come out flying colours. I am a product of the university system but what my student learn within their four years HND program, I didn’t learn throughout my four years in UNILAG. I didn’t even visit any studio or any lab throughout my stay. You know in Nigeria, we are interested more in certificates, yet, there are a lot of people that have certificates that cannot justify theirs.

Basically, I can tell you that students with HND are better prepared and equipped to dive into the industry than student with degrees, but the unfortunate thing is that the people that make policy in Nigeria are degree holders, hence, the dichotomy. Obasanjo wanted to end that dichotomy. What is the difference between the curriculum that we teach at National Diploma (ND)/HND and that of the university? Let me shock you- I have published books, two to be precise, and they even sells more in universities than they sell in polytechnic and monotechnics, yet I work in a monotechnic. I have said this overtime and stand to be challenged on this even when our ND students goes to I.T, they outperform students that are coming from the university in 300level, so it is a dichotomy and I think we have to remove this distinction between HND and BSC, it doesn’t make any sense.