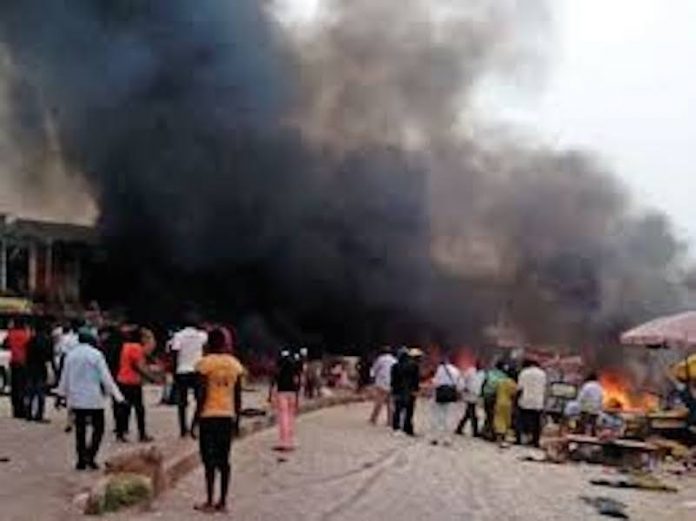 The youths defied pleas from women and the elderly in the community attacked and destroyed a police van and journalists that had gone to the community to investigate the killings.

An eyewitness from the community, Mr. Emmanuel, who said 13 persons were killed, added that the gunmen had invaded the community in a Hilux van at about 8:30 pm on Sunday and opened fire on persons at a relaxation spot in the premises of a hotel in the area.

The gunmen also shot at several others outside the premises and drove away.

“The command immediately mobilised to the scene of crime. On arrival we discovered that some people were shot. The victims were immediately rushed to Jos University Teaching Hospital (JUTH) and Plateau Specialist Hospital.

“As a result of the attack, eleven (11) persons have been confirmed dead by doctors from both hospitals mentioned above while (12) persons were wounded and are now on admission receiving treatment.”

While the state Commissioner of Police, Mr. Undie Adie, is expected to visit the scene of the event later Monday, securitymen deployed in the scene stationed about 1,000 metres away from the affected community, obviously for fear of a clash with the youths.

Condemning the attack, the Peoples Democratic Party (PDP) said it was saddened by the event, “which took place yesterday at Lopamdyet area close to Guratopp in Rayfield, Jos South Local Government Area where 13 people were massacred by some militias believed to be Fulanis”.

A statement signed by the party’s state publicity secretary, Mr. John Akans, reads: “This ugly and unwanted killings have been going on, even when we have security checkpoints everywhere within and outside the state capital. This has become clear that the government has abandoned its responsibility of protecting its citizens.

“While killings are going on in the state, tertiary institutions are embarking on strike as a result of failure of government policies, our dear governor is busy wasting our state resources on a foreign trip that will have no direct benefit to our people, even when he was not part of the president’s China trip.

“It is unfortunate and embarrassing that Governor Lalong went on lobbying the Presidency to be part of Mr President’s visit to China. Most disheartening is the fact that when his request was turned down, out of desperation and lack of priority, he on his own travelled to meet with Mr President in China, leaving his people in a traumatised condition.

“The Peoples Democratic Party is saddened by this trend of ugly events going on in some parts of the state, particularly Northern and Central Senatorial zones. Our prayers and thoughts are with first, families of the deceased and injured, and indeed, the people of Plateau State.”

The spokesman of the Special Task Force (STF), Major Umar Adam, said he was yet to gather sufficient details to give to the press.