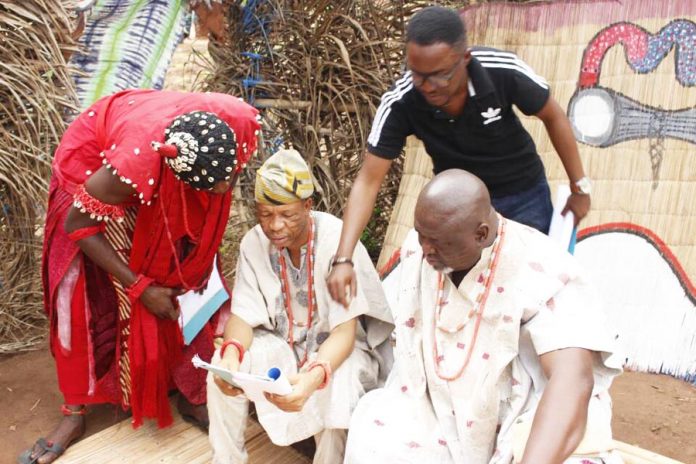 Joshua Ojo, US-trained film maker, has just finished the shooting of his epic movie, Sango: The Untold, and he tells Samuel Ajayi that the new film brings to the fore the many sides to the legendary Yoruba deity many do not know

For Joshua Ojo, the chief executive officer of Davinci Filmworx, the last couple of months have been excitedly challenging. Challenging in the sense that he was stretched to the bones to ensure that the shooting of his latest work, Sango: Untold, was completed on time against all odds; but also exciting because he was also aware that the movie, when released, would change the face of cinematography in Nigeria.

When THISDAY met with Ojo shortly after the shooting of the film on a location in Oyo State, he was full of gratitude to work because it was his most challenging work till date.

“It is the most difficult film I have ever done and so, I’ve been able to master the flow, the trade and business. Sango was really difficult to film because it was even set in a particular period and it benches you to a particular work flow. We could not shoot in a modern setting and we couldn’t have cables and masts and billboards, mobile phones and all of these showing in your film. It meant our direction must be accurate. We lost a lot of equipment; a lot of people fell ill after the shooting. It was really tough and it’s because we embarked on something that seemed bigger than we bargained for,” Ojo explained.

This film maker knew there was a film by Femi Lasode titled Sango. To him, he was aware of this but what he has set to do in the new movie is to tell the story of Sango that people were not aware of. How did he grow up? How was his childhood? What did he like doing? What kind of person was he? Was everything about him not going beyond spitting fire?

Ojo said the aim of the new flick was to answer these questions and present to viewers a Sango many people did not know. When asked how people would react to the movie and if it would meet expectations, Ojo said that won’t be a tough call.

“There are different kinds of films; so people relate to them differently and they have their advantages. Suzanne Wenger which was the first cinematic film I did and it cut across the lower Yoruba crowd. Berger (the story of the legendary Julius Berger) was what did it for me. It went really international and recognised outside Nigeria as well and now my new film Sango: Untold, has cost me so much.

“We built 60% of the locations we used including the palace and the rain destroyed them and we had to rebuild over and over again and that cost me so much. Some of my crew members left when they got tired. We went on a break and came back two weeks later with a new set of crew. As if that wasn’t enough, some of the actors were replaced too. Sango is a deity and I could remember that few actors turned down the script after reading the story. The animations, effects and so on also cost me a whole lot. In fact, fiance also left me while filming the story. It was really challenging but I thank God.”

Ojo said when the idea of the film first came, he was initially going to run away from it because he knew it was going to be challenging and considering that in Nigeria we hardly archive things. There are no records.

“We were looking for many things we couldn’t find them so we had to build them. When I read the script I wrote, I realised it was challenging but if I did this, it was going to definitely put me on a new slate and it’s a film that cut across internationally. So I decided to give it a shot and not just shooting it, but also using actors that I believed would do justice to interpreting the roles. The project took us about four months to film and post-production is still going on we might still be on it for the next three months. The budget of the film is extremely high. And after filming I had just 80kobo left in my account for almost two months,” Ojo explained.

Ojo has always been in the movie industry. 21 years ago, he started as an actor before veering into production. And he told this reporter he has never regretted it.

“Before I became a film maker, I started off as an actor in 1997. With the zeal, anxiety and dream of wanting to become a film maker I approached established filmmaker, Tade Ogidan, and studied his style of filmmaking with other filmmakers like Jimi Odumosu and Femi Odugbemi. I could remember vividly that Uncle Tade Ogidan gave me his equipment for free to shoot some of my films back then. I did some TV series as a kid actor then. I did Tightrope by the late Chief Tunde Oloyede, Fuji House of Commotion by the late Amaka Igwe and when it was time for them to shoot Playing Games 1-3, Uncle Trade Ogidan invited me for audition and I scaled through and that was how I started as an actor. Later I realised I love writing and making films, so acting wasn’t really what I wanted to do alone. So  i did few courses at Independent Television Producers Association of Nigeria, ITPAN, Film School here in Lagos, then I  travelled out to study filmmaking at New York Film Academy, NYFA, and got back, stayed home for months doing research on what I wanted to do and now, here we are.”

He set up his production company Davinci Filmworx and he believes that he has been able to combine his creativity in art with business and that is why the show is still on.

Ojo’s new work, Sango: Untold, features established stars like Hafeez Oyetoro, a.k.a Saka, Akin Lewis, Laide Bakare and co. When asked who plays the lead role of Sango, Ojo had this to say:

“I want that to be a joker I don’t want to reveal now. It is a face I want people to see only after the film has been released.”