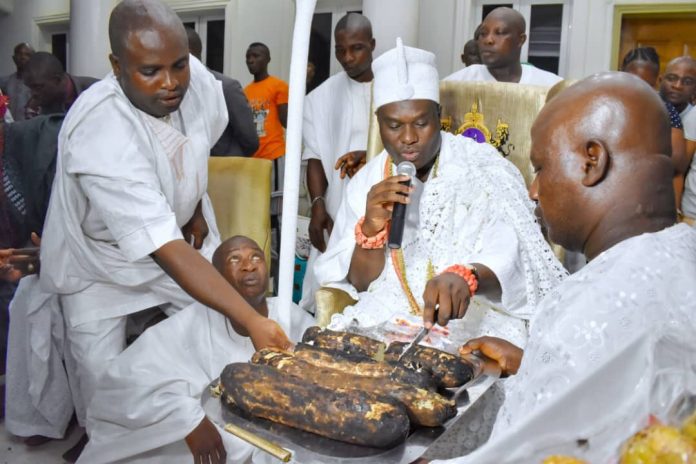 After decades of neglect, Ile-Ife recently went agog as the once forgotten New Yam Festival was resurrected in fulfilment of the cultural agenda of the Ooni of Ife. Yinka Kolawole, in Osogbo, reports

These days, it is commonplace to see Nigerians trying to adopt foreign cultures and neglect their local traditions, which more often than not are deemed to be diabolical. However, much has been done to try to counter that narrative through various forms of Cultural Revolution.

Perhaps, nothing succinctly captures the decline of traditional values like the quote by Barack Obama in his book, Dreams from my Father, “For a people already stripped of their history, a people often ill equipped to retrieve that history in any form other than what fluttered across the television screen, the testimony of what we saw every day seemed only to confirm our worst suspicions about ourselves.”

In fulfilment of his cultural tourism agenda, the Ooni of Ife, Adeyeye Enitan Ogunwusi, Ojaja II, who also doubles as the Arole Oodua, was recently joined by indigenes, tourists and invited guests to celebrate the New Yam Festival, which hitherto had not been so elaborately celebrated in the last 120 years.

The newly revived festival known as “Odun Isu” in Yorubaland held at the Ile-Oodua palace, Ile-Ife, where citizens from other Yoruba towns came in large numbers to celebrate the occasion , which was a colourful display of culture and traditions.

Ogunwusi while addressing the mammoth crowd at the festival chronicled the history of the festival. According to him, a deity called ‘Oreluere”, who was one of the 401 deities sent by God(Olodumare) to establish the world, was the first hunter on the planet earth that planted yam before Oduduwa supported him to make on it a success.

The African foremost monarch acknowledged that God had provided all different but necessary foods for sustainability of humanity and annual germination and growth of yam for human consumption.

Ogunfuyi, who is regarded as the spiritual father of Yoruba race worldwide, observed that the process of originality of yam production emanated from the cradle of Yoruba’s; Ile-Ife, while adding that yam is one of the foods with high carbohydrate that gives energy.

He further stated that Oduduwa collaborated with other deities on how yearly plantation would be guaranteed, adding that “Owo” dynasty also value the celebration yearly. He also maintained that the New Yam Festival is a very big event across the world, which explains why the Yoruba cultural heritage is very keen about it.

He said, “I charge all other neighbouring towns especially Yorubas to emulate the ancient city of Ile-Ife in making the event a continuous exercise.
Our youths must go into huge commercial farming as Yoruba communities are known as producers of yam for the entire world.

“This belt is called yam belt and these yam belts produce 70 per cent yam for national consumption, while others share the remaining 30 per cent. The plantation started from kingdom of Ife to the Middle Belt of Nigeria, straight to Central African Republic and other West African nations down to Southern Africa. Every individual has the capability and strength for production and Yorubas have mastered it and become the experts in yam production.”

Also speaking, the Co-chairman of the National Council of Traditional Rulers of Nigeria, Sultan Mohammed Abubarka III, who also doubles as Sultan of Sokoto, added that since the past heroes had suffered for the sustainability of human race, therefore, people ought to crown their efforts by appreciating them by embracing farming.”

Earlier, the Vice-Chancellor of Obafemi Awolowo University (OAU), Ile-Ife, Professor Eyitope Ogunbodede, who congratulated Ooni Ogunwusi on the 2018 yam festival, commended him for promoting culture and tradition of the Yoruba race globally.

Ogunbodede added that the festival has exposed all to the international community, adding that from all indications, people prefer the celebration as it has attracted a lot of visitors not to Ile-Ife alone but to other Yoruba communities. He added that celebration of New Yam Festival added value to the economic benefit of the nation, as it encouraged farming and community development.

The vice-chancellor further appealed to the three tiers of government to ensure improvement in the storage facilities of agricultural produce for adequate safety since is for human consumption. He also called on government to provide infrastructure such as electricity, portable water and good roads for smooth transportation of farm produce from farms to the cities for more patronage. In the same vein, Ogunbodede lauded the Ooni for putting all efforts in maintaining peaceful coexistence on campus of Obafemi Awolowo University and Ile-Ife in general.

He said, “The relative peace we are enjoying in Obafemi Awolowo University community is the handiwork of God who used Ooni Ogunwusi. As we are enjoying him in Ife and Yoruba land at large, the entire nation are also enjoying him because of his peace mantra. Baba Ooni Adeyeye Ogunwusi is always giving us a tremendous support. He has severally organised for people from Brazil, Portugal, and Cuba to come to Obafemi Awolowo University, Ile-Ifeto learn African languages. I here pledge that the school management will not disappoint him.”

Meanwhile, the Oba Olopo of Ilode, Oyedotun Akintibubo, commended Ooni for the celebration of the festival, which he said is the first in the history of Ife Kingdom. Akintibubo said that during the past regimes, only his family used to celebrate the festival, before Ogunwusi elaborated it.

The Olopo of Ilode assured that the community, state and Nigeria at large will experience surplus over the years from farm produce, especially yam and corn, which he said will maximally grow extensively. He said, “With this year’s celebration, people will not experience hunger and hardship again, for the land will strongly produce seeds for the satisfaction of human race.”