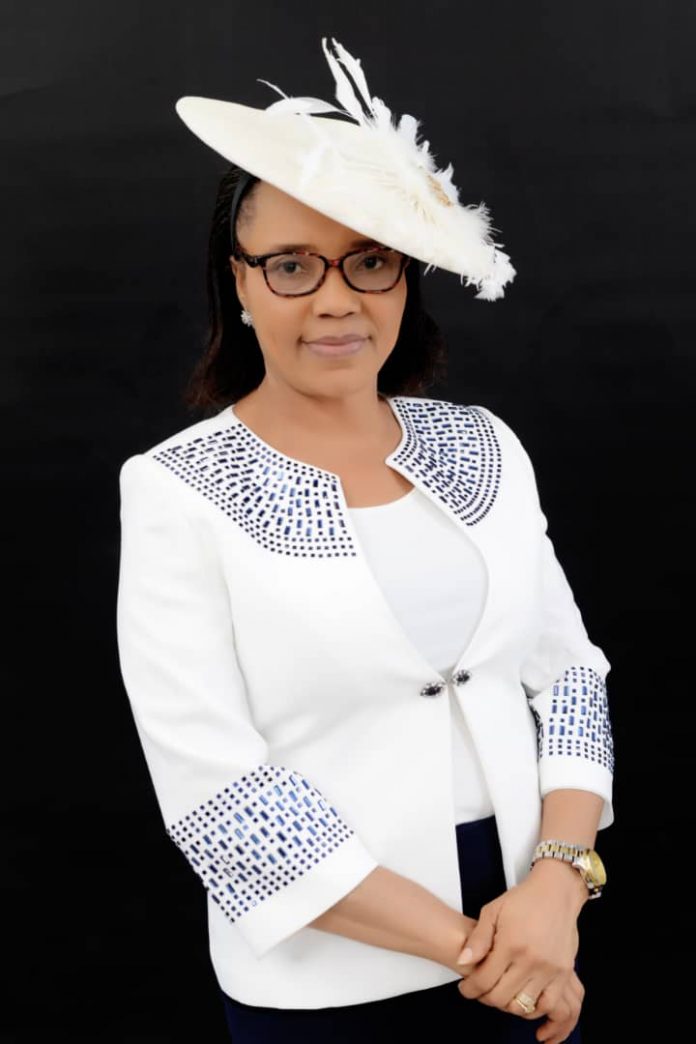 Multitalented Nigerian artist, Dr. Stella Awoh Mofunaya, has continuously brought forth creative business ideas. The fashion designer, textile producer, caterer, event planner and lecturer at the fashion department of Yaba College of Technology (YABATECH), recently stumbled upon a mind-blowing concept following an academic research she carried out as the first female to be awarded a doctorate from the University of Benin.  In this interview with Mary Nnah, Mofunaya talks about her research findings, how she overcame widowhood, and plans for her forthcoming solo exhibition, A New Dawn. Excerpts:

You just concluded an astonishing research. Can you tell us how it all started?

At a point I went back to the University of Benin for my PhD on Print Making with special focus on fabric. So at the verge of graduating, I was told to do a project that was different from the usual ones. I was challenged by my supervisor, Prof. John Oghene, who told me he wanted an unusual research into art and food. That was quite challenging, and I said what has food got to do with arts?  I was stunned. I left a little disappointed because I didn’t even know where to start from.  But of course I took it to God in prayers and while sleeping one night I saw ginger and the Holy Spirit took me back to when I was a little girl. My mother had always used ginger, garlic and other local spices for her personal use. Let me digress a little; my mother had me at almost 47 years and died at 91.

So, I remembered I used to pound ginger for my mother those days as the last born in the family. Sometimes, she left it overnight or for days. I also remembered that when I poured the liquid out from the ginger then, I used to see some starchy substance settle underneath the bowl.  I became inquisitive and did a research on it at home. I dried the white substance and got starch. I was so excited. I then went back to my supervisor and told him I was going to work on ginger starch. But my supervisor said that was not good enough, that I should go into the field and do the research. That took me to the Federal Institute of Industrial Research, Oshodi (FIIRO), a parastatal under the agency of the Federal Ministry of Science and Technology.

That was how I began my research on ginger. Interestingly, it was not easy to be accepted as an artist because there, they were also wondering how ginger was lined with art and fashion but to God be the glory, my research turned out to be a huge success. I did the first research on ginger.  I started with analysing the moisture content in ginger. I dried it in the oven and I took it to them in UNIBEN and every one was excited, wondering how I arrived at that. There is starch in ginger which most people don’t know and now I have my ginger starch.

And while doing this particular research on ginger starch I stumbled on other findings. I discovered that ginger has a substance in it that is anti-inflammation, anti-cancer and can reduce toxics in chemicals. I also stumbled on turmeric and coconut oil. I have been using coconut oil since I was a youth and for 30 years I have been using it consistently on my hair. You can see how healthy my hair looks and so I decided again to do a research on coconut and then on turmeric.

You are planning an exhibition soon. Are you going to showcase art items or items from your recent research?

The exhibition is titled, ‘A New Dawn’ and I am going to exhibit items from my recent research alongside other art works of mine. You would see items from my past works made of metal foil, mono print, mixed media and fabrics. Of course I am a designer and so you are expected to see fabrics that I have produced over five years ago. I will also exhibit my research works on Aso Oke. We all know that our Aso Oke is no longer plain, we have embellished our Aso Oke and I am still working on it. I have in all 30 works for the exhibition billed to open on September 6 by 12noon and continues daily by 10am-5pm till September 11 at Didi Museum, Victoria Island, Lagos.

It’s been eight years since I had an exhibition. I took a break. That was where I had my first solo exhibition called ‘Hibernation and Rejuvenation’. It was a few years after I lost my husband, but now I have remarried. Then I had a lot of challenges and I went into hibernation but by His grace, I have rejuvenated. I wrote a book titled, ‘From Grave to Grace’ barely a year after we lost him. Thereafter, I had another solo exhibition titled ‘Funeral rites of married men’. After that, I had ‘ Hephzibah and Beulah 1 and 2’. And now, it’s “A New Dawn.”

You had your last exhibition eight years ago. Why did it take so long for you to come up with another exhibition?

I was busy with my studio works and my PhD research work and so it would have been too stressful to think about organising an exhibition then but now that I am done with my PhD research, I am coming out to say it’s ”A New Dawn”. I remember being a widow for 15 years. It was so challenging.  Despite the fact that I am in the academia, I had just a first degree all the while and being a widow with children to carter for, I had to delve into a lot of things to make ends meet without sparing so much time for my academic development but to God be glory, I am at the moment, the very first woman to graduate with a PhD from the University of Benin.

In what ways will the research on ginger be helpful to humanity?

You discover that a lot of our artists are coming down with illness. About twelve years ago, Professor Bruce Onobrakpeaya drew my attention to the health hazard of the paints that we use and he told me about a friend in the US that ended up sick. Most times, we inhale the chemicals and our skin also absorbs it. So, I am looking at how to save artists and textile designers from the health hazards of the chemicals they use. They all use chemicals, even our mothers that do the local dying at Osogbo, most of them end up with lung problems. Unfortunately, lots of artists are keeping quiet. Some have done surgeries and they are managing their health, yet they are not telling the truth. Fortunately, I got two of them that opened up to me. One of them has something passed through his spine and can no longer stand for a long time to paint. So, there is a lot of health hazard in painting, ceramics, sculpture and others. If artists add ginger to their lives and studio, it would decrease the toxins that they inhale because they must inhale it.  Ginger would therefore go a long way to help them and of course, if people take it for a long while they won’t have inflammation. That is why you see the Chinese and Indians looking rugged because they take lots of gingers and garlics.

I am the first Nigerian fine artist to come out with that research on ginger. Another thing that I have done after my ginger is working with turmeric. I have worked on fabrics with turmeric, instead of using the imported dye, I use turmeric. The research took me outside the country. Another thing I discovered is that in South Africa, London, US their gingers are as big as potatoes but it is not as potent as ours.

Our ginger here is rugged, more potent that all the Indians and the Chinese come in here to export our ginger. They go back there and refine it and then export it here. Also I grew up using coconut oil and everyone is going for it. Sadly, a lot of people are taking in poison. Most of them use flavouring, they get oils like the olive oils or vegetable oil that we use and add flavouring. So, it is flat, nothing there. I also have my ginger powder with cinnamon. Cinnamon has anti-oxidants and when you take it you won’t have problems with liver. We have cinnamon in Nigeria, yet out people import cinnamon. Another thing I discovered during my research is that anyone taking ginger should avoid taking aspirin or any strong analgesic. If you mix the ginger with your paint, it reduces the toxins in the chemicals. It depends on individuals, the can brew it and drink it like tea with honey. They can use to cook it. You can also inhale the steam.

What were some of the memorable moments you had while doing the research and production?

When I produced my ginger starch in FIIRO, I was excited and we had to go through a moisture and analysing machine to know the quantity of ginger that would give me five tablespoons of ginger starch. Currently, I have a Nigerian inventor in Canada and we are working together on something. Interestingly, my last daughter is producing soaps, body cream and organic products with my products.

What are some of the challenges of being a female artist?

As a female artist, once you are married, it becomes tougher to cope. It becomes a very big challenge working in the studio and taking care of your husband and kids, except you are lucky to be married to a very understanding husband, who is also an artists or loves creativity.

What word of encouragement do you have for women generally?

My heart goes out to the widows, especially in Nigeria. I would tell them to hold strongly on to God. I was a widow for about 15 years till I got remarried just last year and yet I was able to improve on myself tremendously. It hasn’t been easy but with determination on my part, God has been with me all the while.

Darling Nigeria Rewards Creativity for its “Style Like a Star” Campaign