Lagos State alone contributed 73 per cent to the 2018 World Bankâ€™s rating of Nigeria on the ease of doing business, a global competitive index for measuring business regulations, the state governor, Mr. Akinwunmi Ambode, has said.

Also, the governor said the state, currently with an estimated population of over 22 million people, has received more foreign direct investments (FDIs) in the last two and half years than it received in the previous 15 years.

He made the disclosure at a strategic meeting he held with the French Ambassador to Nigeria, Mr. Denys Gauer, alongside some delegates of the Movement of the Enterprises of France (MEDEF) at the State House, Alausa yesterday.

Established in 1998, MEDEF is the largest employer federation in France. However, MEDEF replaced the National Council of the French Employers (CNPF) founded in 1946. Now it has more than 750,000 member firms, 90 per cent of them being small and medium enterprises (SMEs) with fewer than 50 employees.

At the meeting which the Lagos State Officer of Overseas Affairs and Investment coordinated, the governor said the resolve of the state government to enhance the ease of doing business in the state had started yielding dividends.

He noted that Nigeria moved 24 steps in the recently announced World Bankâ€™s Ease of Doing Business ranking, noting that it was most gladdening â€œto remember that Lagos State alone contributed 73 per cent to the World Bankâ€™s ranking of Nigeria on this front.â€

He, therefore, said the state government would continue â€œto inspire confidence among investors worldwide and it is a fact that Lagos has received more FDIs in the last two and half years than it received in the previous 15 years.â€

By implication, the governor added that the stateâ€™s modest achievement â€œhas been made possible by our resolve to improve security of lives and property in the State, by embarking on security and justice sector reforms, by lightening up Lagos streets and by easing the passage of traffic across the state.â€

â€œIn the nearest future, Lagos State will put in place an intermodal transportation system, taking full advantage of our waterways, rail networks to mention but a few. As a country, we have had a great relationship with France even if this slowed down some time back,â€ Ambode explained.

With what it has to offer, the governor said Lagos State could spearhead the revival of this relationship and the ushering in of a stimulating cooperation between Lagos and France, noting that Lagos is open to business.

Consequently, he urged the French business community not â€œto miss out on the real and great opportunities that exist in Lagos State in such sectors as health, agriculture, transportation, energy, tourism and entertainment among others.â€

He noted that Lagos might be the smallest state in Nigeria by size, but it was the most populous State in the country with 22 million people and with a GDP of $136 billion, which he said, earned it a prime place of Africaâ€™s fifth largest economy, much bigger than several African statesâ€™ economies combined.

The governor, thus, said now that the French business giants have witnessed the progress our government has made in the last two years especially in the area of infrastructure development and creating an enabling environment for business in the state, it is my hope that you will be encouraged to invest in Lagos.â€

In its 2018 report, the World Bank had ranked Nigeria 145th, precisely 24 positions better than the 169th position the country was ranked in the 2017 report. The report showed that Nigeria was among the 10 top countries that improved on reforms.

Although the report ranked New Zealand first on the ease of doing business index for the second consecutive year, it listed the areas that Nigeria improved with reforms to include starting a business, dealing with construction permits, registering a property, getting credit and paying taxes. 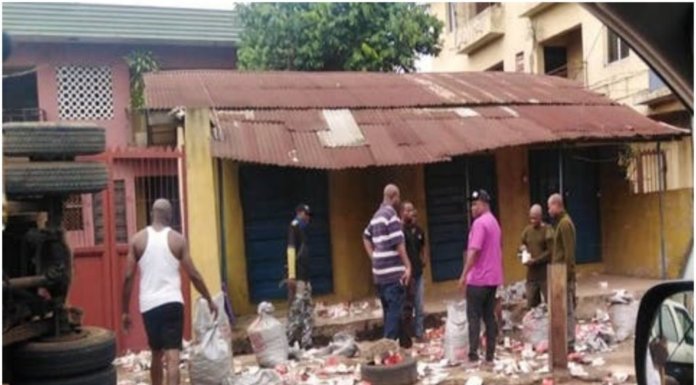 NEPZA Partners NBS to Track Contribution of FTZs to Economy