With the completion of the first ever fabrication and integration yard in Nigeria and near completion of local fabrication works, Samsung Heavy Industries has obviously surmounted the odds with the integration of a Floating Production Storage Offloading (FPSOs) facility. Ejiofor Alike reports

Nigeriaâ€™s oil and gas industry is set to record another landmark development with the planned in-country fabrication and integration of the Floating Production Storage Offloading (FPSO) facility being built by Samsung Heavy Industries (SHI) of Korea for Nigeriaâ€™s Egina deep-water oil field.
Located at the Oil Mining Lease (OML) 130 offshore, the 200,000 barrels â€“per-day capacity Egina deepwater field, which will start production in 2018, is being developed by the French oil major, Total Upstream Nigeria Limited (TUPNI).

The capital expenditure (Capex) for the six packages in the oilfield development is $16 billion, out of which $3.3 billion is earmarked for building the FPSO.
Total awarded the contract to SHI in 2014 after the Korean firm emerged the winner, following a rigorous tendering process.
The Egina FPSO is not the first FPSO to be deployed in Nigeriaâ€™s oil and gas industry as the country currently has 14 FPSOs all built in foreign yards.
Out of these 14 FPSOs, five were built for giant deep offshore oil fields â€“ Shellâ€™s Bonga, ExxonMobilâ€™s Erha, Chevronâ€™s Agbami and Totalâ€™s Akpo and Usan fields, all located several kilometres offshore, in water depths ranging from 200 metres to 1.2 kilometre.

However, the uniqueness of the Egina FPSO lies in the fact that apart from being the largest FPSO in Nigeria, it will also be the first FPSO to be fabricated and integrated locally in Nigeria, and indeed, Africa.
All the FPSOs operating in Nigeriaâ€™s oil and gas industry currently were built and integrated in foreign yards, thus denying Nigeria the huge benefits of growing her Gross Domestic Product (GDP) through in-country domiciliation of the huge expenditure, and local capacity development, as well as job creation.
But with the signing into law, the Nigerian Oil and Gas Industry Content Development (NOGICD) Act on April 22, 2010 by former President Goodluck Jonathan, the law mandated the Nigerian Content Development and Monitoring Board (NCDMB) to deepen the participation of Nigerians and Nigerian facilities in the oil and gas industry, by facilitating local capacity development and ensuring that the execution of large components of any project is domiciled in-country.

Major driver for fabrication and integration of Egina FPSO
As already highlighted, the NOGICD Act of 2010, better known as the Nigerian Content Law empowers the NCDMB to maximise local participation in the oil and gas industry as part of the efforts to build local manpower and facilities, curb capital flight and create job opportunities for Nigerians in the industry.
With the backing of this piece of legislation, the NCDMB not only insisted that any future integration of FPSOs must be carried out locally, the agency also directed that a large fabrication scope of FPSO project must be performed in Nigeria.
By insisting on domiciling certain scopes of oil and gas industry jobs in-country, the NCDMB incentivised indigenous providers of services to invest heavily to build capacity to be able to meet the expected demand in more challenging jobs.

However, it was quite a challenge to find the shipbuilding company, which will be able to make such commitment and that plan to come true. SHI has committed to make local entity within the Free Zone, and against all owes, has shown to make No.1 yard in Africa.
Thus, the planned local fabrication and integration of Egina FPSO and indeed, all future FPSOs built for the West African sub-region by SHI, is a game changer in Nigerian Content development with its potential to make the country the hub of oil and gas business with huge Nigerians expected to be gainfully employed directly and indirectly.
FPSO fabrication and integration yard
Though the implementation of the Nigerian Content Act, it had led to increased indigenous asset ownership, particularly marine vessels, in-country fabrication and manufacturing capabilities, as well as local human capital development. The country had lacked facilities for integration of FPSOs before Total awarded the Egina FPSO contract to SHI.

In order to carry out the local fabrication and integration of the Egina FPSO as required by Total, and the NCDMB, Samsung Heavy industries surveyed local facilities, but eventually Samsung decided to build a new fabrication and integration yard with 300mil $ of investment to keep the international standard level of quality and safety, within Tarkwa Bay LADOL Free zone which was virgin land mass.
The investment led to the creation of an independent entity, Samsung Yard (SHI-MCI FZE) in LADOL Freezone Tarkwa Bay.

It is well known in oil and gas sector that the fabrication and integration of the FPSO modules requires the high-end technology and only a few international EPC companies are able to take those scopes under their responsibility. Now over 1,200 of Nigerian technical experts, fully trained by Samsung are successfully performing the fabrication of Egina FPSO topside modules with 95 per cent of progress and are preparing the forthcoming integration work while LADOL, a logistic company, is providing ferry and electricity service.
Even after the creation of this investment, NCDMB and other stakeholders in Nigeriaâ€™s oil and gas industry were still skeptical about the success of the planned local integration of the Egina FPSO as a result of the high risk factors such as potential leakage on high sea and other dangers prevalent in local integration.
With no margin of error tolerated in such projects, SHI has kept its eyes on the ball, despite the initial challenges.

As a corporate financial giant, SHI has made a foreign direct investment (FDI) of $300 million to this fabrication facility, a legacy investment that was completed through 2014 to 2016.
Major benefits
The local fabrication and integration of the Egina FPSO will boost technology transfer and the development of indigenous manpower and facilities, as evidenced in the construction of the Samsung Yard and the training of Nigerian technicians, engineers and other professionals by SHI.

The yard has already provided 1,200 employment opportunities in the areas of welding, fitting and other support services; while the cascade effect outside the yard will generate huge jobs over the coming years.
The Local Fabrication and Integration of the Egina FPSO in Samsung yard has helped Nigerians to build more local capacity in increasingly challenging skills.
By executing these jobs locally, the funds that could have left the shores of Nigeria for financing the fabrication in foreign yards are retained in the Nigerian economy.
Apart from Nigerians acquiring new skills set in the oil and gas sector, the execution of the project locally also contributed to Nigeriaâ€™s GDP

Many scopes of the Egina FPSO project are also being executed in other local yards, such as Saipem, Nestoil, Dorman Long, Nigerdock and Aveon Offshore, among others, thus ensuring the development of local capacity and capability, in line with the NOGICD Act of 2010.
With its 200,000 barrels per day capacity, Egina will increase Nigeriaâ€™s daily crude oil production by about 10 per cent, thus generating additional revenue for the country.
Being the first fabrication and integration facility in Africa, the Samsung Yard (SHI-MCI FZE) will catapult Nigeria to become the hub of oil and gas business and shipbuilding in the continent as all future FPSOs in the Gulf of Guinea will be fabricated and integrated in Nigeria.

The local fabrication and integration of the FPSO will also help to ensure that the huge revenue and the industry spend in the oil and gas sector are linked to the Nigerian economy.
Before now, a major challenge that faced the Nigerian economy was that the huge revenue and huge industry spend in the sector was not effectively linked to the economy, apparently due to low participation of indigenous manpower and facilities in the oil and gas business.

With the low participation of the local facilities and manpower, a greater chunk of the industry spend was not domiciled in the country to create an attendant multiplier effects on the Nigerian economy.
Before the federal government made a bold attempt to domicile a large scope of the industry jobs in the country through the enactment of the NOGICD Act, which created the NCDMB, only less than 10 per cent of the then about $15 billion spent yearly in the industry was domiciled in Nigeria.
However, the implementation of the NOGICD Act has incentivised many foreign and indigenous players to invest heavily in local capacity development to compete with foreign yards in certain scope of engineering and fabrication jobs.

The Samsung Yard(SHI-MCI FZE)and the Fabrication and integration of the Egina FPSO locally, represent an ambitious attempt by NCDMB, SHI and Total to build local capacity so that Nigeria can retain in-country, a large chunk of the yearly industry spend for the benefit of her economy. 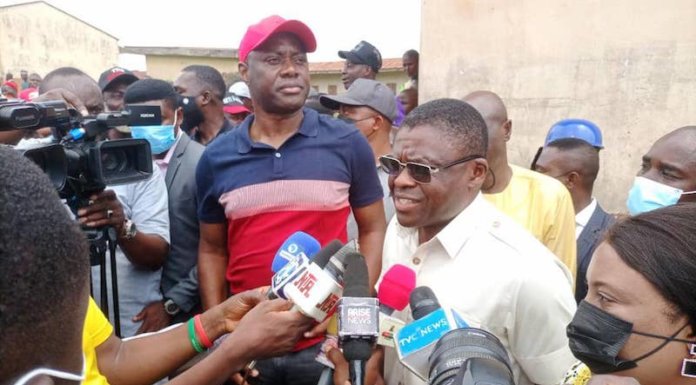