As the iconic octogenarian Nigerian artist, Bruce Onobrakpeya, stomps into his 85th year, Okechukwu Uwaezuoke reviews his many bequests to the art world

Acluttered ground-floor room in Bruce Onobrakpeyaâ€™s imposing residence was swarming with art journalists. As the host, the highly-venerated artist â€“ flanked by a handful of his acolytes â€“ sat facing the coterie of news hounds.
This was a few days before his 70th birthday. A good reason why the building, situated along Oloje Street in the Lagos mainland neighbourhood, Papa Ajao, became a hub of the local art community.
â€œDo you feel 70?â€
This question, coming on the
heels of another, was not unexpected.
Onobrakpeyaâ€™s reply was almost instantaneous: No, he didnâ€™t. A cascade of other words accompanied this reply.
Nor did he look 70. He could actually have passed for a man almost a decade younger, if one chose to overlook his grey hair and moustache.

Fifteen years on, Onobrakpeya still bubbles with the same youthful ebullience as he awaits his 85th birthday on Wednesday.

Not too long ago, he was awarded an honorary Doctor of Arts degree from the Delta State University. But this was just one among the many major recognitions for his priceless contributions to the art world. In 1989, for instance, he was a recipient of an honorary D. Litt from the University of Ibadan. This was followed by an honourable mention at the Venice Biennale and the Fellowship of the Society of Nigerian Artists on June 6, 2000.

Of course, there were others like the Pope John Paul II award for depicting the life of Saint Paul, the Fellowship of Asele Institute, an award from the late Iraqi strongman Saddam Hussein, the Solidra Circle award and the Fulbright Exchange Scholar award.

In 2006, UNESCO recognised as a Living Human Treasure. Then, the Federal Government of Nigeria finally deemed him worthy of the prestigious Nigerian Creativity Award on September 14, 2010.

Onobrakpeya owes his intimidating stature in the art world more to his diligence than to his renown as one of the surviving members of the long defunct Zaria Art Society. His art practice swirls mainly around printmaking, painting and sculpture. It is on this tripod that he has traipsed through several mediums of expression.

A close-up on his studio practice lifts the veil on his mind-boggling cavalcade of artistic creations from as late as 1957 till date. Art historians have, for their convenience, segmented these works into periods. Perhaps, the shortest among these is the first, which coincided with his student years at the Nigerian College of Arts, Science and Technology (the precursor of the Ahmadu Bello University) in Zaria from 1957 to 1962. Mythical Realism, they dubbed this period, during which he produced paintings and lino cut prints, depicting folkloric themes and the northern Nigerian landscapes. This was when the Zaria Art Society was bequeathing the art world with its natural synthesis precept.

Moving on to the second period â€“ called the Sunshine Period, spanning the years 1962 to 1967 â€“ the artistâ€™s workshop experiments and his bronzed lino relief series swim into focus. This was the period when, having attended various workshops, he produced well-known works like the lino print â€œLeopard in a Cornfieldâ€, the lino engraving â€œScarecrowâ€ and the silkscreen â€œMan & Two Wivesâ€.

Then followed the Mask and the Cross period â€“ from 1967 to 1978 â€“ during which he produced several works based on Christian themes, among which were the lino engraving â€œNativity IIâ€, the plastocast â€œThe Last Days of Christâ€, the bronzed lino relief â€œObara Ishoshiâ€ and the metal foil â€œPope John Paulâ€. During this period, he also developed a lot of ideas he had started during his NCAST years with the plastography medium.

The period between 1978 and 1984 saw him representing historical vignettes, which came to be known as the Symbols of Ancestral Groves. The historical figures in these vignettes were mainly royalty of the Benin Kingdom. It was also during this period that works like â€œEghrighriâ€ and â€œIbiebeâ€ were produced.

The Sahelian Masquerades period â€“ between 1984 and 1988 â€“ featured works he produced to express his concern about the destruction of the environment. For instance, one of such works â€œEdjo Atonâ€ (principles of good governance) draws the governmentâ€™s attention to the issue of desertification.

The next period â€“ 1990 to 1995 â€“ was when he focused so much on the development of images, which eventually inspired the depictions of masks. Dubbed the Mask Series, the works were done in different printmaking techniques and was nourished by the local folklore.

Nigeria’s dark years under one of its worst military dictators inspired Social Unrest, which spanned between 1995 and 1999. During this period, he produced large paintings through which he sought divine intervention against the pharaoh-like regime. This was the period he produced works focusing on the murder of Ken Saro-Wiwa, â€œEkugbeâ€ (Unity), â€œNude and Protestâ€ as well as â€œSmoke from the Broken Pipeâ€.

The current segment in the artist’s creative odyssey â€“ 1995 to date â€“ is euphemistically called Installation Period. True, the artist created installations to draw attention to the need to protect the environment, among others. Yet, the works were more like platforms for further innovations.

And talking about innovations, even the artistâ€™s entire career has been all about bequeathing new media to the art world. From first developing a collage of lino blocks with bronze-coloured patina (called Bronzed Lino Relief) in 1966, he devised other media like plastocast relief (a painted low-relief design cast with resin), plastograph (a deep-etching technique innovated in 1967 through a â€œhydrochloric acid accidentâ€), additive plastograph (a printmaking technique that uses glue as drawing medium), metal foil deep etching (a plastograph print that makes use of aluminium foil to draw engraved images), metal foil relief print (a three-dimensional metal foil print drawn on a plastocast plate) and ivorex (a technique that simulates the optical effect of old ivory engraving, though the material used is polymer).

Last, but not the least, among the innovations is the Ibiebe Alphabet and Ideograms. It is a writing style devised by the artist, which reflect his knowledge of his Urhobo heritage and apparently inspired by the Chinese, Japanese, Ghanaian and local Nigerian calligraphic traditions.
To him also the local art scene owes the annual Harmattan Workshops in the Delta State town of Agbarha-Otor, where he was born on August 30, 1932. This workshop, which has been on since 1998, has drawn artists from not only within Nigeria but also from outside.

Not less important, of course, are the mind-boggling number of exhibitions he has featured in, the number of his works in both public and private collections with and outside the country and his book illustrations.
Arguably the most documented Nigerian artist, he has featured in the following films and documentaries: Kindred Spirits: Contemporary Nigerian Artists, by Smithsonian World Washington, D.C. USA; The Magic of Nigeria, produced by Delka/Polystar and directed by Ola Balogun, Lagos, Nigeria; Recalling the Future Art by Joanna Grabski, produced and directed by Claudine Pommier with the executive producer Cheikh Tidiane N’diaye/Arts in Action Society (Vancouver, Canada) 2002;

A recent addition to these are the two documentaries by the Lagos-based Back Page Productions: Agbarha-Otor, the Ultimate House of Art featuring on-site conversations with the artist, and Bruce Onobrakpeya Non-stop, a close encounter with the him. 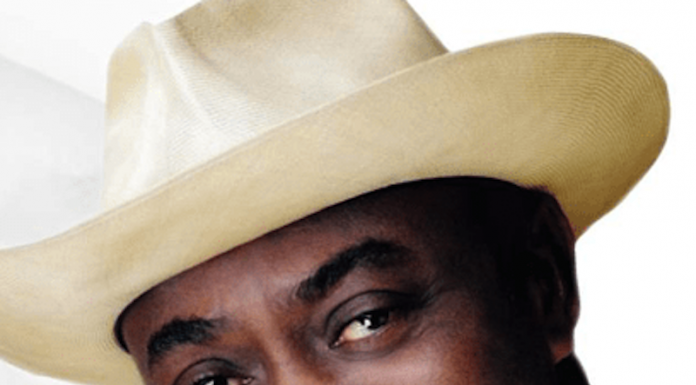