Tobi Soniyi in Abuja
Vice President Yemi Osinbajo yesterday told the leadership of the National Assembly  that some members of the Nigerian troops to The Gambia where they had gone to pressurise the former President, Yahya Jammeh, to hand over would remain in the tiny West African country to maintain peace.

Osinbajo, who for the third time in the week met with the leadership of the National Assembly, announced the decision to keep some of the troops in The Gambia during the meeting.

All the meetings, sources said, were aimed at resolving knotty issues on the 2017 budget.
Last Monday, Osinbajo met separately with the Speaker of the House of Representatives, Yakubu Dogara, and the Majority Leader, Ahmed Lawan.

On Tuesday, he met with Senate President, Bukola Saraki and Dogara where they discussed Nigeria’s planned roadshow to revive the economy.

Yesterday, he also met with both Saraki and Dogara for discussion on  Nigeria’s mission at The Gambia.
Briefing State House correspondents at the end of the meeting which lasted about an hour, Saraki said the vice president briefed them on Nigeria’s troop to The Gambia.

According to him, while the navy and the air force would be coming back very soon,  some of the troops will be left behind in the West African country to help maintain peace.

Saraki said: “The vice president is briefing us on our trip to The Gambia and what the situation is. And that the navy and the air force will be coming back and that is likely some troops will be left behind.”
Nigerian troops were deployed to The Gambia at the height of the political crisis after Jammeh had reneged on conceding defeat in the December 1, 2016 presidential elections.

Jammeh was forced to relinquish power on January 19, 2017, after losing election to Adama Barrow.
The regional body, Economic Community of West Africa States (ECOWAS), had deployed troops in the country to enforce an ECOWAS mandate to chase him out.

The ECOWAS mandate was led by President Muhammadu Buhari and former President of Ghana, John Mahama.
He finally bowed out after several diplomatic shuttles and a show of military might by ECOWAS standby force and fled into exile in Guinea, paving the way for President Barrow to assume office as the new Gambia President.

Save for the massive manpower, both air and at sea and the show of force, deployed by the federal government and the security forces of other nations, the ousted former President of the Republic of Gambia, Jammeh, was ready for war, THISDAY gathered yesterday.

This disclosure was made by the Nigerian Air Force (NAF) after 97 of its 200 contingent sent to restore peace in The Gambia, arrived at the NAF Air Lift Group  in Ikeja, Lagos.

While receiving the contingent led by Air Commodore Tajudeen Yusuf, the Chief of Air Staff (CAS), Air Marshal Sadique Abubakar, said the air force would have applied commensurate force if Jammeh had not opted to back down.

It was gathered that although the ousted president was battle ready, as he had availed himself with the best of the country’s military weapons, the show of mightier force by the airpower of NAF influenced his decision to stand down.

According to the contingent, which arrived in a NAF 918 C-130 aircraft and two alpha jets, they had first shown off their military strength by continually flying over Jammeh’s residence from their base in Senegal.

With the different NAF air lifts and aircraft flying over, as well as that of other countries, the Gambian military were said to have downed their weapons for fear of retribution, given the small strength of their military power.
Having opted not to fight, they allowed the ground and air forces of ECOWAS forces to access the state house, as well as Jammeh’s personal residence.
Thus, when they finally accessed the state house and his personal residence, they saw that he was really prepared for war in a bid not to leave office.

While addressing the troops, the CAS who was represented by the Chief of Policy and Plans, Air Vice Marshal James Gbum, said the remaining personnel were left behind to ensure stability and reintegration of the Gambian military forces.
He said, “Prior to your departure, the CAS addressed and emplored you to represent Nigeria well.

“Thus, the discipline and professional conduct you all maintained was highly commendable and worthy of mention.
“Also, your cooperation with sister services and other military forces of other ECOWAS countries is also commendable.

“We are glad that democratic order has been maintained in The Gambia and stability achieved through your efforts. You have proven to be good ambassadors of NAF and made Nigeria proud.
“Note that the ability of NAF to provide Airpower at home and project same seamlessly in other countries is an achievement buoyed by the support of President Muhammadu Buhari.”

He said, “We conducted the operation with deterrence and diplomacy. When we gained access to the state house, from what we saw, Jammeh was prepared for war.

“But for the Airpower that we showed, as we were the first country to show up at The Gambia, he would not have stepped down.
“For now, we have won the battle but it’s left for the political leaders to win the peace and stabilise the country.”
On the troops left behind he said, “The forces we left there are to basically stabilise The Gambia and integrate their forces in the security arrangement.

“They will continue to be there until stability is achieved and the ECOWAS leaders decide that all security forces of other nations stand down.” 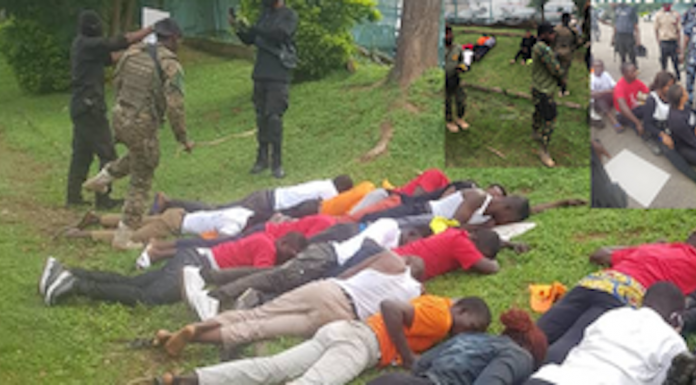