Nineteen Northern governors would be visiting the United States Institute of Peace next week as part of the US government’s effort in the sustenance of peace in the region.

”The urgent challenges for Nigeria’s powerful northern state governors range from addressing a humanitarian crisis sparked by Boko Haram’s insurgency to boosting economic growth with alternatives such as agriculture to make up for declining oil revenue”, Johnnie Carson, a senior advisor at the U.S. Institute of Peace, said ahead of a governors’ symposium to be held at the Institute next week.

The northern states of Africa’s most populous country are its poorest, and they are beset by social, economic and environmental problems that affect the stability of the whole nation, said Carson, a former U.S. assistant secretary of state for Africa who is helping to organise the meeting.

”Such issues are the cause of underlying tensions that gave rise to the extremist Boko Haram group, and the governors have the clout to begin tackling them.

”The Boko Haram situation cannot be resolved by military means alone,” said Carson, the State Department’s top official for Africa from 2009-2013. “The symposium will provide an opportunity to share our experience and open the way for new thinking and new ideas”, he added.

For the governors, the priorities include immediate reconstruction of schools, hospitals and water systems as Boko Haram is pushed back, leaving behind a humanitarian disaster; expanded educational opportunities for girls; economic development; and easing tensions between farmers and herdsmen over land use.

”The shock of Boko Haram has created the understanding that things have to be different,” added Princeton Lyman, a USIP senior adviser who was ambassador to Nigeria from 1986-1989. The symposium—the second for northern state governors hosted by USIP—comes at a difficult time for Nigeria in other respects that have highlighted the need to revamp policies and practices, he said.

Lyman added that the collapse of world oil prices has left the governors with about 60 per cent of their former budgets and made clear the need to diversify their economies further.

During the three days of the symposium which holds between October 18 and 20, the governors will meet with U.S. officials as well as business leaders to discuss Nigeria’s development and investment opportunities in the northern region. After the event, the governors are expected to coordinate with a Senior Working Group of Nigerian civic, business and other leaders that USIP has helped establish to assist with implementing ideas coming out of the symposium.

“The conversations will be broad,” said Oge Onubogu, a senior program officer at USIP who works on Nigeria. While most of the symposium will be closed, governors will discuss their issues in a webcast forum, with the public posing questions via Twitter.

Three northeastern states where Boko Haram is most active live under states of emergency and 26,000 people have been killed over the past seven years, Carson said. Kidnapping, assassinations and destruction of infrastructure have weakened the reach of the governors in the region who, like all Nigerian state chief executives, wield extensive fiscal, territorial, security and legal powers.

More than 2 million people in the northeast have fled their homes and need to be returned or resettled, Onubogu said. Meanwhile, in Borno, the state most affected by Boko Haram, 240,000 children are suffering from severe malnutrition, according the United Nations; and across the northeast about 4.5 million need food aid.

In 2014, Boko Haram ranked as the world’s deadliest extremist group, killing 6,644 people and outpacing the self-styled Islamic State, or ISIS, according to the Global Terrorism Index, published by the Institute for Economics and Peace. The group came to particular international prominence in 2014, when it abducted hundreds of young girls and sparked a civic movement called #BringBackOurGirls.

Under President Buhari, military campaign against the group has accelerated, and US has committed special operations advisors to aid in the fight. The group’s militancy already had spilled into neighboring Niger, Chad and Cameroon.

The work with the governors is part of a broader USIP program to address the roots of violent conflict in Nigeria that includes strengthening interfaith cooperation and the ability of young people to hold authorities accountable. Nigeria’s youth population is due to expand by 60 per cent in the next 15 years, according to a United Nations report.

USIP has worked extensively on interfaith cooperation in conflict zones, and in Nigeria more than a decade ago helped some of the country’s most prominent Muslim and Christian leaders mediate peace between their communities in large sections of Plateau and Kaduna states 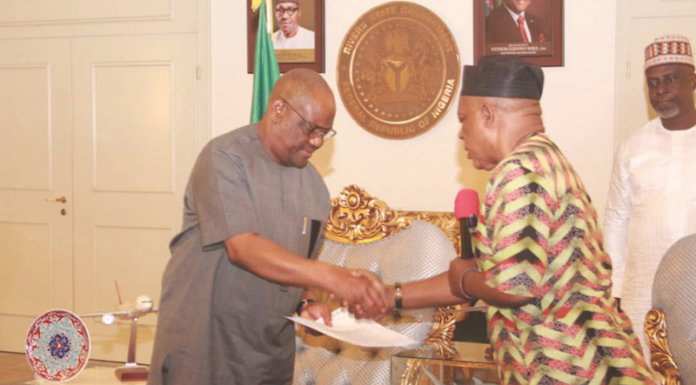