Nigeria’s foremost indigenous carrier, Aero Contractors is in danger of extinction. Only urgent injection of funds can save the ailing airline, writes Chinedu Eze

Nigeria promising and oldest indigenous carrier, Aero Contractors has paid the price of a selfish decision taken against it some years ago, when its stakeholders shortchanged the airline and gained at its expense. The consequence is that Aero, which few years ago, was a beacon of hope as the most technically advanced local airline is now moribund.

Few years ago, the company took critical decisions that undermined its future. That was when it acquired six Boeing 737-500 at inflated costs, which many in the industry described as ill-advised acquisition. THISDAY learnt then that Aero became a victim of a sour deal, which some interest groups padded their pockets at the expense of the company.

The then Oceanic Bank funneled money through its subsidiary, Oceanic Capital and seven aircraft were earmarked to be purchased, but six were eventually acquired without a refund and the aircraft, which were supposed to be purchased at $3million each, were allegedly inflated to $7million each and they were purchased from the Arizona aircraft graveyard in the US. The toxic loan was inherited by Ecobank when it took over Oceanic Bank, which handed it over to Asset Management Company of Nigeria (AMCON).

This was how AMCON became an undertaker of an airline that was a bastion of hope for many pilots, engineers and cabin crew, who dream that one day they would work with Aero Contractors. This was an airline whose passenger queues snaked the length and breadth of the check-in hall of the domestic terminal of the Murtala Muhammed International Airport (MMIA), Lagos, known as MMA2. It was an airline known for its timeliness and professionalism. But today, it has almost completed its reluctant trek to the graveyard.

As at Tuesday this week Aero has only one Boeing 737-500 and two Dash 8 aircraft that were airworthy; all others are either awaiting to be ferried for maintenance or were already at maintenance facility, waiting for money to be paid before they are ferried back to resume operation. What this means is that by the time this one Boeing and two Dash 8 aircraft become Aircraft On Ground (AOG); the airline would not have any operating aircraft and would technically be out of business.

Aero is under the receivership of AMCON. Will the government agency allow the airline, which has over 1000 direct workers and hundreds of indirect workers to go under?

Aero needs injection of funds to resuscitate it and put it back on track. The aviation unions alleged that interest groups, including AMCON representatives who ran the airline aground, mismanaged the initial funds AMCON made available to the airline.

The estimated cost of maintenance check for each aircraft is about $600,000, “but we should not forget that in a check the total cost can increase because beyond the scheduled job in the job card other issues may emanate when the aircraft when opened and the cost could rise up to $900,000,” an official said. With average age of 22, each of the Boeing 737-500 aircraft needs comprehensive C-check to put them back in the air again.

THISDAY learnt that three Boeing B737 had already gone for C-check, but have not been ferried back because the cost of maintenance has not been paid. “Part payment has been done on some but they have not been completely paid for,” a source told THISDAY.

“We are trying to raise money but the bank is looking at the financials. Aero has invaluable goodwill; it has the first maintenance organisation in Nigeria. We have the capacity to do all checks on Dash 8 aircraft and all checks below C-check on Boeing 737. We have the expertise to do C-check and we have applied to the Nigeria Civil Aviation Authority (NCAA) to get approval. We do Kings Air, Hawker, Hawker Sidney and Dash 8 Bombardier,” inside source told THISDAY.

AMCON could facilitate access to funds but the financial institutions are apprehensive about the airline’s ability to pay back.

“What we have decided to do is to reduce our overheads. Now the domestic market is extremely fragile, but if we can get our airplanes in the air they will start making money; you don’t make money with airplanes sitting on ground,” inside source told THISDAY.

If Aero goes down 1,100 Nigerians will lose their jobs. The airline used to have 1,453 workers but there was slight reduction recently, leaving the aforementioned number still in its employ.

Out of the three Dash 8 in Aero fleet, two are presently working but the airline could put the third one back into operation if it could get the spares.

THISDAY learnt that AMCON is striving to solve the Aero problem, but it is sceptical about injecting new funds into the airline, unless it is sure that this time the funds would be judiciously utilised. The government agency is in receivership of the airline and would not want the company to go under while under its management. That would nibble at the image of AMCON, as it would seem that it takes over ongoing concerns and kills them. Industry observers say that AMCON has its own share of the blame because it took over Aero strutting around as if it had the experience to effectively manage the airline, even without any prior experience and now it is gearing or threatening to take over other airlines, such action would spell doom for the airline industry.

About two weeks ago there was rumour that Africa’s most successful carrier, Ethiopia Airlines was contemplating taking over Aero. While it would be a welcome development of the Nigerian carrier, it would give the East African airline a leeway to Nigeria’s domestic market, which would pit it with other local carriers, but later THISDAY learnt that Ethiopian did not make any commitment on Aero but what happened was that a member of the Ibru family, who married Ethiopian wife used that connection to arrange a meeting with the East African carrier.

“There was a meeting but there was no commitment. Ethiopian does not have money to pay. What Aero needs now is operational fund, so AMCON did not indicate any strong interest in the visit because there is no firm commitment. But if Ethiopia has money to pay, AMCON might be willing to take them in. We have to look at the way Ethiopian operates. They have been in Togo with Asky; they are always unwilling to invest money. Aero has ideas but needs money to implement them,” inside source told THISDAY.

Industry operators said what is happening to Aero could happen to any other domestic carrier because Nigerian airlines have low utility due to inadequate infrastructure at the airports and low utility damages aircraft. As many airports runways do not have airfield lighting, aircraft operate average of seven hours a day, but for adequate utilization of the equipment aircraft should be operated for about 12 hours a day.

“For an airline to be profitable it has to operate each of its aircraft for approximately 11.5 hours per day. That is the global average. And for Nigerian operation to be profitable the cost of one hour flight presently should be N45, 000, which obviously is beyond the means of many Nigerians. That is equivalent of N19, 500 of last two years when the exchange rate was N170 per dollar. Then fuel was about N90 per litre but now it is going for N200 to N230 per litre,” industry expert told THISDAY.

Overall, there is reduction in passenger traffic due to present economic recession but an official of Aero told THISDAY that Aero has invaluable goodwill and that goodwill is not easy to replace.

“Aero as an airline that is well structured. It has potential. It can create a model with high capability and highly skilled manpower, so AMCON should not allow it to die,” the official said.

However, THISDAY learnt that the airline has started losing its technical personnel, including pilots, engineers and other technical staff.

Last year the aviation unions raised the alarm about the dwindling fortunes of Aero and said to was obvious that the funds of the company were grossly mismanaged and that explained why the airline was unable to take its eight aircraft on ground then for maintenance checks. Out of 13 aircraft the once glorious airline was operating five and whenever any of the five came to C-check it may be dropped instead of ferrying it for maintenance overseas because despite the revenue the airline was generating every day, the structure in place could not enable it save money for maintenance.

The National Union of Air Transport Employees (NUATE) suggested then that there was urgent need for proper management team of technocrats and upright characters to take over the management of the company and look into the all the injustices in the system in order to reposition the company to its enviable height.

The union then warned that if no urgent action was taken, one could see from a short distance the grave of the once most reputable Nigerian airline that had so much goodwill and promise.

Aero Contractors may be in the hand of effective management now, but it needs funds to remain in business. 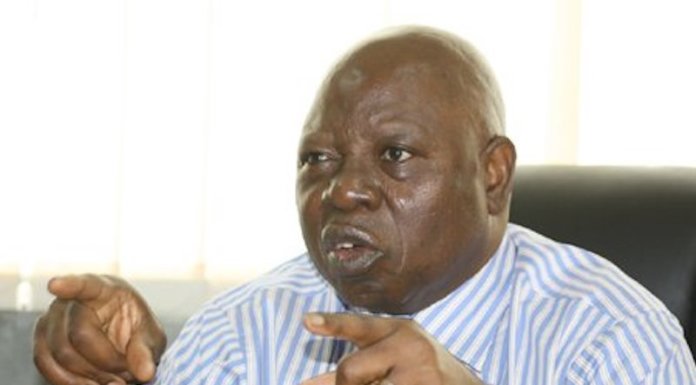