DJ Cuppy and Temi Otedola are no hostages to fortune. Despite their father, Femi Otedola’s amazing wealth, the beautiful daughters and heiresses to a billion dollar fortune, seek to prosper by their own merit. Cuppy, 23, and Temi, 19, would rather command the applause of listening senates and succeed by their own merit.

Wearing their beauty like a satin bow, the sisters engage in feverish pursuit of their dreams, with the determination of huntsmen seeking to catch tiger cubs by trashing the tiger’s lair. The heiresses to the Forte Oil conglomerate, among others, understand perfectly that in the pursuit of their dreams, even if their strength should fail them, their boldness will deserve praise.

Cuppy and Temi are aware that in great endeavours even to have had the will is enough. Thus even though they currently lead what the Daily Mail of London describes as a “jet-set lifestyle enjoying all the trappings of wealth,” the Otedola sisters are poised to seek their fortune and sustain it, far from the trappings of their father’s affluence. Their recent interview with the British newspaper, among other things, reveals the depth of persona and quality of grooming accorded them by their parents. Unlike most silver spoon kids who would rather feed off their parents’ fortune, Cuppy and Temi are free-spirited and sensible enough to know that the only way they could earn the respect and adulation of the world is to move out of their father’s shadow.

To this end, Cuppy and Temi have taken decisive steps to establish themselves in their preferred careers. Even though they will one day inherit their father’s fortune, worth an estimated £650million, Cuppy wants to be a successful DJ while Temi runs a successful stint as a fashion blogger. The daughters of one of Africa’s richest men are simply not content being rich and famous in their father’s shadow. They want to “work hard to make names for themselves in their own right.” “I am scared of always being his daughter and not getting past that, for me that means not being successful enough,” Cuppy reveals on Channel 4 documentary, Lagos to London, Britain’s New Super-Rich. “I am still masked by my dad’s success. If I didn’t try and make it outside Nigeria I would be unhappy.”

BLOODY NOSE! OIL BARONESS, UJU IFEJIKA, QUIETENS DOWN
The truth dawned on Uju Ifejika like a twilight of eternal damnation. The boss of Brittania-U Nigeria Limited, an oil firm, practically lost her wits and drowned in a whirlpool of grief as the Supreme Court ruled against her firm, Brittainia U, which requested earlier that the apex court grant an interlocutory injunction requesting Chevron Nigeria Limited (CNL) to stay action on the transfer of assets OML 52, 53 and 55 to Amni, Seplat and Belema oil respectively. Recently, the Supreme Court Justices sitting in Abuja ruled against Brittania U. On Friday, Chevron Nigeria Limited formally handed over the producing assets in OMLs 53 and 55 to Seplat Petroleum Development Company Plc based on the judgment.

Prior to the sale of the OMLs to Seplat Plc, Uju had instituted litigation against Chevron, praying the court to stop the company from selling the OMLs to Seplat Plc. Uju had been battling with Chevron and Seplat Plc for almost two years yet Chevron sold the three oil blocks despite pending litigations arising from the disputes in the bid process. Uju’s company, the Brittania-U, reportedly won the bid after due process but Chevron suddenly changed its mind and refused to sell the assets to it and instead sold it to Seplat and two others. While Seplat acquired Chevron’s 40 per cent stake in OML 53, OMLs 52 and 55 were sold to AMNI International Petroleum Development Company and a Nigerian special purpose vehicle, Belema Oil Producing Limited, respectively.

HOW PRISON TURNED YESTERDAY’S TIN-GODS TO TODAY’S COWARDS
•POWERFUL MEN AND WOMEN TURN WEAKLINGS IN EFCC CUSTODY
Like a lion which died of an ass’s kick, their impotence did not catch up with them until they got caught. By the time they gathered their wits, Nigeria’s most powerful men and women had been reduced to minions and cowards behind the nation’s prison walls. At the last count, prominent men and women that paraded themselves as deities during the tenure of former President Goodluck Jonathan had been ushered behind bars for one grand felony or the other – thanks to incumbent Head of State, President Muhammadu Buhari.

There is no gainsaying President Buhari’s anti-corruption campaign has ruffled more than a few feathers. At the president’s directive, the Economic and Financial Crimes Commission (EFCC) launched series of inquests into embarrassing cases of financial fraud and theft committed by former public officers, mostly ex-cabinet members, business and political associates of former President Jonathan. Although the culprits screamed ‘witch-hunt’ at the beginning of President Buhari’s anti-corruption fight, their noise has since dwindled to inaudible whispers and plea for leniency. Many of the suspects have started returning outrageous sums embezzled from the public treasury while the immediate past administration was in power.

Those that are yet to be prosecuted have absconded from the country to escape imminent jail term. Those that are yet to refund stolen money and whose cases require the full attention of the punitive and corrective machinery of the law are still in detention. For the latter, life behind bars has been enlightening. Stripped of their power, title, fame, material wealth and freedom, these men and women have been reduced to nothing in the eyes of the law and their fellow inmates. However, no sooner than they were ushered behind bars, than they lost their pride and obnoxious ego. For the first time ever, reality dawned on them and they understood the depth of their vanity.

RAINOIL BOSS, GABRIEL OGBECHIE, CELEBRATES 50…. A FESTIVAL OF LIFE AND SPECTACULAR RHYTHM
Bliss nestles in the heart of Gabriel Ogbechie, the ebullient MD of RainOil as you read. Ogbechie is no doubt an accomplished business titan and magnate under whose tutelage generations of successful entrepreneurs may yet prosper. Realising the significance of his new age, Ogbechie threw a lavish party at the prestigious Intercontinental hotel, Lagos on the 28th of May. There was a church service at Daystar Christian centre in the morning before the high-octane dinner. While Gabriel Ogbechie played host to a stream of family, friends, business associates, the Intercontinental Hotel pulsated with pomp and glamour. The elaborate event, which paraded top politicians, society big wigs and captains of industry, was classy.

Yes, the colour theme for the party was gold. All the withered bouquet crowns fell on trodden ground. They sank into the rug among the expensive garbage of empty wine bottles and champagne corks. Memories of tipsy and appreciative folks with tired eyes, hoarse tenors and weary legs evoke random echoes of RainOil boss, Gabriel Ifeanyi Ogbechie’s classy 50th birthday bash. At Gabriel’s party, every guest was treated like a star. The utter sophistication of the venue which was charmingly spruced-up by magnificent decorations and the guests glowing finery further emphasised the degree of attentiveness to detail and diligence that went into its preparation on the part of the host and the degree of meticulousness that went into the guests’ preparation for the event respectively.

Every guest was given the royalty treatment; they were all treated to the choicest brands of champagne; from Don-Perignon and Cognac to Moet & Chandon. Asides the assorted liquor, beer and fruit juices, the guests were also treated to delicious meals and dessert that sufficiently wet their palates and sated them. At the background, a soulful medley of very old and contemporary music wafted from well-appointed woofers causing the guests to loosen up and ditch their inhibitions to yield to the beats as much as the music moved them. 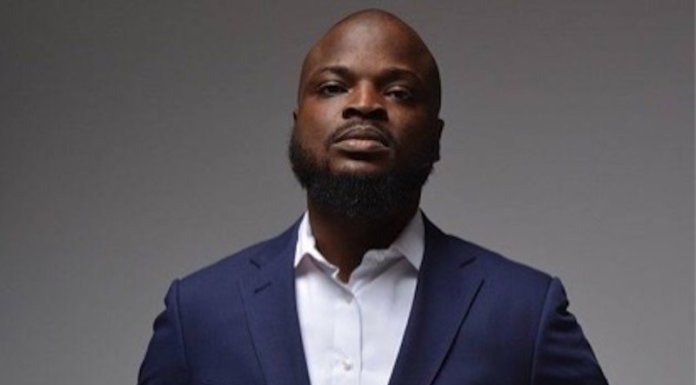