Dr Bukola Saraki, has dismissed the purported clearanceof the Chairman of the Code of Conduct Tribunal (CCT), Danladi Umar, by the Economic and Financial Crimes Commission (EFCC) in relation to his alleged involvement in a N10 million corruption case.

Saraki contended that there was no time the EFCC cleared Umar, and that even where such clearance existed, it was a confirmation of his (Saraki’s) position that the CCT under Umar could not ensure fairness in his trial.

Saraki, who spoke in Abuja through his lawyer, Ajibola Oluyede, argued that the clearance purportedly issued Umar by EFCC could not override the recommendation made in 2014 by the Attorney General of the Federation (AGF) for Umar’s prosecution.

Oluyede said it was only the AGF that possesses the power, under the law, to reverse a decision to prosecute, arguing that his client’s application urging Umar to disqualify himself from the trial was still at the tribunal.

He faulted reports that the application had been thrown out by the tribunal, noting that since the prosecution was yet to respond to it, and it had not been heard, the tribunal could not have decided.

He also faulted reports that he was thrown out of the tribunal’s sitting venue. He said that he was at the proceeding until it was adjourned.

He said that he would argue the application before the tribunal once it was ripe for hearing.

“We are not saying he (Umar) is guilty. We are saying he is tainted and that he cannot act independently while the EFCC that is investigating him and had indicted him is now prosecuting our client before him. That is why we asked him to recuse himself from the trial.

“He did so before in the case involving former FCT Minister, Jeremiah Useni, where he excused himself from the hearing on the ground that he had close relationship with Useni. We are asking him to do so again now because of the facts that we have presented,” Oluyede said.

Referring to some additional documents he filed before the tribunal, Oluyede noted that upon the EFCC report of June 24, 2014, the then AGF directed then EFCC Chairman, Ibrahim Lamorde to prosecute Umar and his aide, Ali Gambo for accepting bribe from an accused person, Rasheed Taiwo. 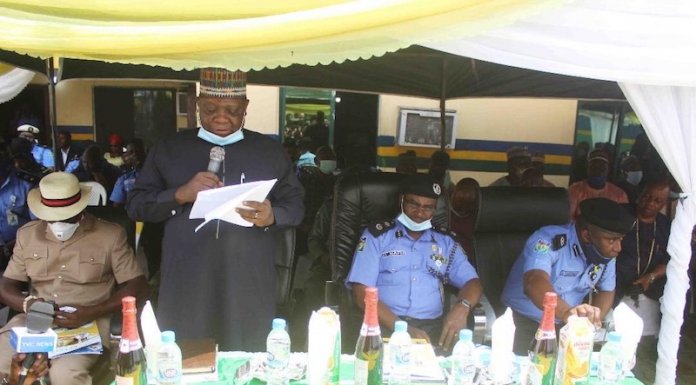